Mercedes A class sedan launch around the corner 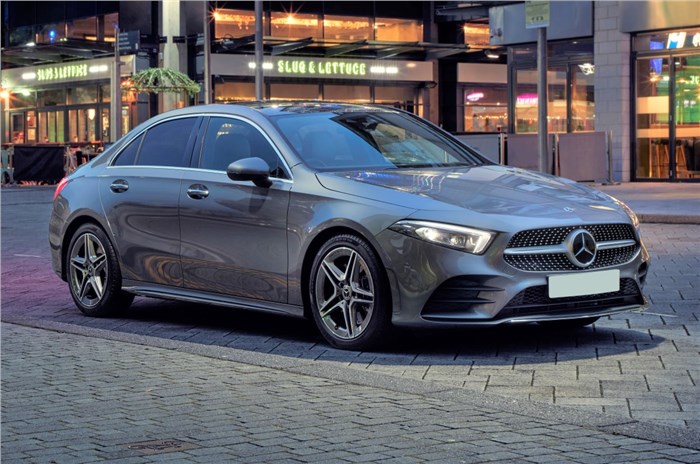 306hp AMG A35 to launch first, with standard petrol and diesel versions to follow shortly after.

The Mercedes A class sedan, or ‘A-class Limousine’ as it will be known in our market, was first showcased at the 2020 Auto Expo earlier this year, and the market launch was meant to follow soon after, but then the Coronavirus struck. Now, after a delay of many months, Mercedes’ A-class plan is back on the table.

The first A class sedan to hit showrooms will be the imported 35 AMG with 306hp and a sportier all-wheel-drive system. This high-performance version of the A class sedan gets a more aggressive front bumper, larger side skirts, bigger alloy wheels, a gurney-flap-like spoiler on the bootlid and large exhaust cans that stick out from under the rear bumper.

The superbly finished cabin gets sportier touches, like AMG bucket seats, a sporty AMG steering wheel and a Burmester surround sound system. There’s also configurable LED ambient lighting on the dash and around the vents, a large sunroof and Mercedes’ latest MBUX interface, with twin 10.25-inch screens for infotainment and instrumentation.

Slated to go on sale as early as the end of October 2020, at an expected price of around Rs60-65 lakh (ex-showroom), it will the most performance-oriented car in its class.

The ‘regular’ Mercedes A class sedan, powered by less powerful petrol and diesel engines, is expected to go on sale possibly during the festive season.This car, however, isn’t a direct replacement of the Mercedes CLA earlier sold in India.

While the CLA was a four-door coupé with pillar-less doors and a tight-fitting arched roof, this one gets full-frame doors, a slightly longer 2,729mm wheelbase, and a more conventional sedan roof, too. The A class Sedan, in fact, is longer overall than the recently launched BMW 2 Series Gran Coupé.

The new entry point to the Mercedes brand will be powered by two engines – a petrol and a diesel. The diesel – the A 220d sedan – will put out a strong 194hp, and will compete directly with the BMW 220d Gran Coupe. The petrol engine will most likely be the A 200 sedan, with around 185hp on tap.

The petrol and diesel models will each be available in a single fully loaded trim.Equipment on offer will include the new MBUX infotainment system with navigation and connected-car tech, dual-zone climate control, LED headlamps, a panoramic sunroof, cruise control, powered front seats and wireless phone charging. Prices for the standard A class sedan are expected to be around Rs 40 lakh (ex-showroom).

What do you think of the upcoming Mercedes A class sedan? Would you prefer it over the BMW 2 Series Gran Coupe? Let us know in the comments.