With the confirmation of the three new models, Mercedes’ EQ range will have a total of 8 models. 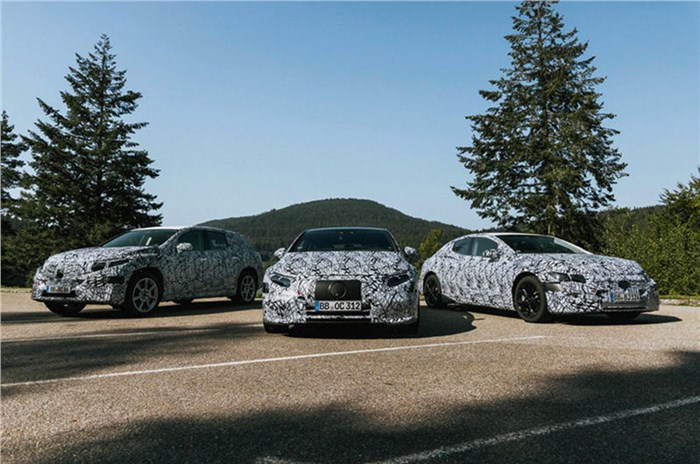 Mercedes-Benz has announced that it will add  new EQE sedan, EQE SUV and EQS SUV models to its growing electric car family.

The three new EQ models, confirmed by Mercedes in a recent investor conference, have been conceived around the German manufacturer's dedicated Electric Vehicle Architecture (EVA). This is the structure that underpins the upcoming EQS luxury sedan, which is currently undergoing the final phase of development ahead of a planned international introduction during the second half of 2021.

The addition of the EQE sedan, EQE SUV and EQS SUV extends the planned EQ line-up to eight models, including the existing EQC and EQV plus the upcoming EQA, EQB and EQS sedan.

Mercedes chairman, Ola Källenius, has previously announced that the company will spend up to €10 billion to establish a ten-strong EQ model line-up by the end of 2025.

In addition to the trio of new EQ models, Mercedes also confirmed a new dedicated electric car platform for compact and medium-sized models, called the MMA, that will go into production in 2025.

It also confirmed long-running rumours that it would create a new sub-brand out of its iconic G-Class off-roader. “The demand for the G is ahead of current capacity,” it said, adding, “The legend will grow.”

Mercedes said plans for the electrification of AMG performance models will begin in 2021 and that the super-luxury Maybach line-up will double in size. In a move that's set to significantly increase its number of electrified models, the company announced that all three of its sub-brands - AMG, Maybach and G, “will go electric”.

But that's not all. A prototype electric car, called the Vision EQXX, is being developed with claims of having the 'longest electric range' and 'highest efficiency' of any EV yet produced. Although no technical information has been released for (as a teaser image suggests) the apparently swoopy two-door model, the presentation suggested a car capable of travelling from Beijing to Shanghai on one charge, that's 1207km.

During the investor conference, Mercedes released a marketing video of prototype versions of the EQS saloon, EQE saloon and EQS SUV undergoing testing in Germany.

In the video, Mercedes' vice president of electric vehicle architecture and EQ vehicles, Christoph Starzynski, stated the EQE sedan is planned for launch internationally, in 2022, as is the larger EQS SUV. No details are provided for the EQE SUV, but insiders suggest that it's set to debut internationally in 2023.

As well as being planned for production in Germany, at least one of the new EQ models (the EQE sedan), is set to be produced in a joint venture with Beijing Automotive Industry Corporation in China.

Production of the EQS will take place alongside the recently unveiled seventh-generation S-Class at Mercedes' Factory 56 in Sindelfingen, Germany.

Contrary to previous reports, Mercedes says its new entry level EQ model, the GLA-based EQA, is planned to make production before the end of the year. It's one of three EQ models set to arrive in international markets in 2021, alongside the GLB-based EQB and the EQS sedan.

What's more, our sister publication Autocar UK understands that Mercedes is planning to further extend the EQ line-up with a third saloon model using the driveline from the upcoming EQA crossover in a modified version of the A-Class Saloon.

The German Luxury carmaker has already introduced its electric ‘EQ’ sub-brand to India with the launch of the EQC EV SUV which has been priced at Rs 99.30 lakh (ex-showroom, India). For more details on how the EQC drive you can read our Mercedes-Benz EQC India review.