The front-wheel-drive 2 Series Gran Coupe is expected to pop up at a BMW showroom near you by Diwali this year. We tell you what it’s like to sit in and what it feels like to drive. 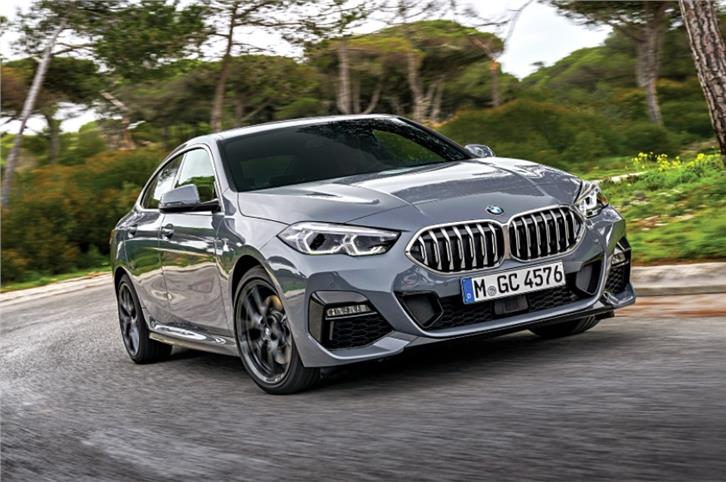 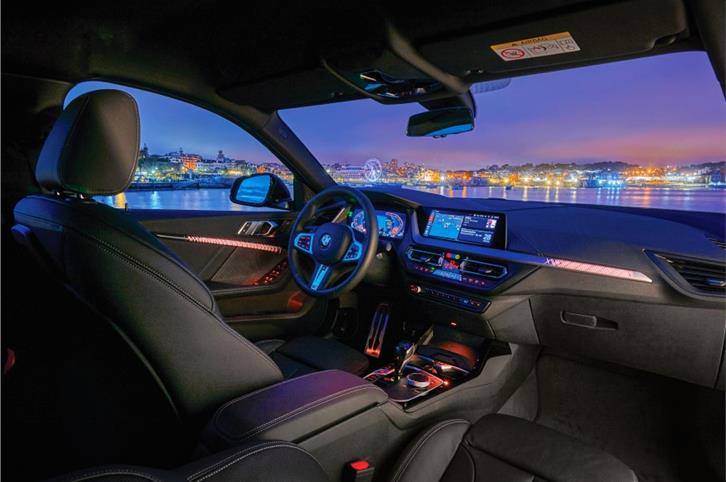 Cabin feels just as well built and well equipped as any BMW. 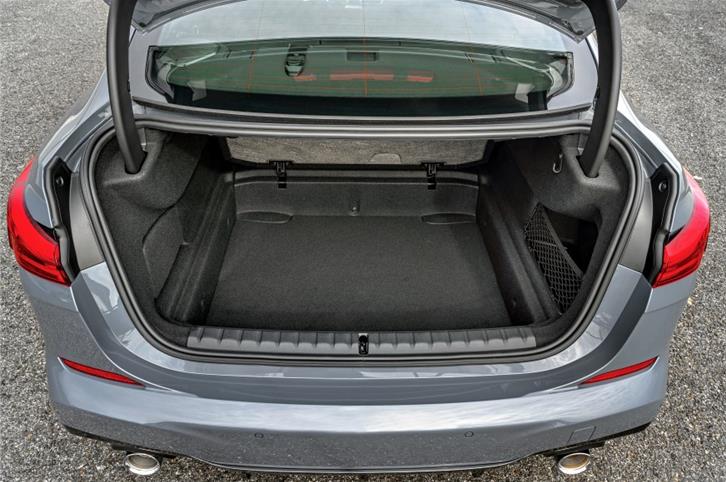 430L boot will have space-saver spare in India.

The 2 Series Gran Coupe is BMW’s most affordable ‘sedan’. A four-door, pillar-less coupé measuring 4,526mm long and with a Rs 32 lakh estimated starting price, the 2 Series will sit comfortably below the 3 Series. It’s not just BMW’s most affordable sedan, it’s also one that’s fundamentally different. Where all BMW sedans use a longitudinally mounted engine and rear-wheel drive (or four-wheel drive), this one uses a transversely mounted engine and front-wheel drive. This architecture is more affordable, space efficient and practical, but isn’t as fundamentally nice when it comes to driving dynamics.

The 2 Series Gran Coupe looks like a ‘pukka’ BMW on the outside. No outsized grille at the front this time around (this car isn’t sold in China), but you do get BMWs latest interpretation of the kidney grille. It’s a bit more ‘stand-up’, looks a bit more aggressive, and what you also get are raked-back headlight units with neat double-barrel LED detailing. Lower down is an aggressive multi-layered chin similar to that seen on other recent BMWs like the 8 Series. Walk around to the side and you are greeted by an interesting and flowing roofline that ends in a fastback-like rear. Similar in profile to some of BMW’s GT cars – like the 5 Series GT and the discontinued 3 Series GT – but not as proportionate or clean-looking, the 2 Series also gets a strong shoulder line, a chunky rear, and a variation of the carmaker’s ‘L’-shaped LED tail-lights. Must say I like the way the BMW logo is placed on the boot. There’s no real Hofmeister kink at the base of the C-pillar, but then this isn’t a rear-wheel-drive BMW, and that could explain its absence. While some of the cars ride on large 19-inch wheels, in India, the 2 Series is likely to get smaller (and more practical) 17-inch wheels. 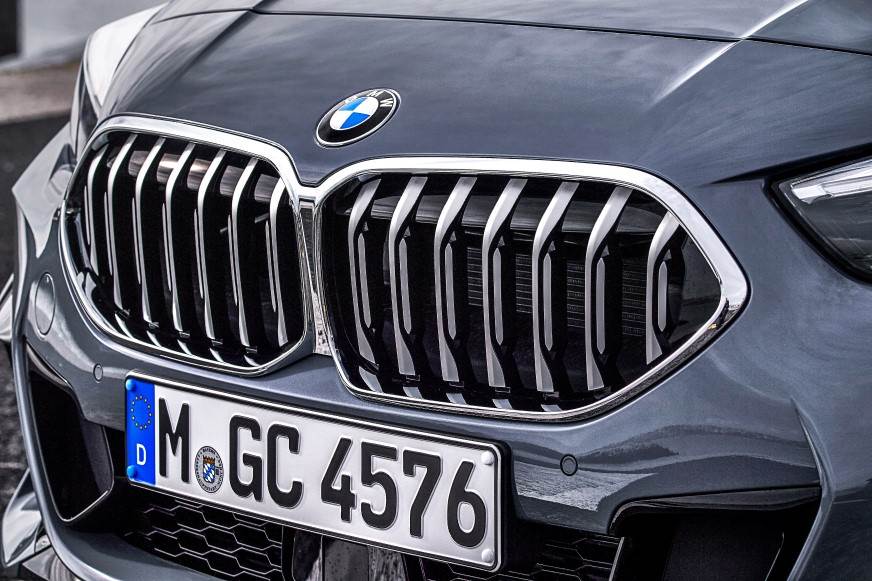 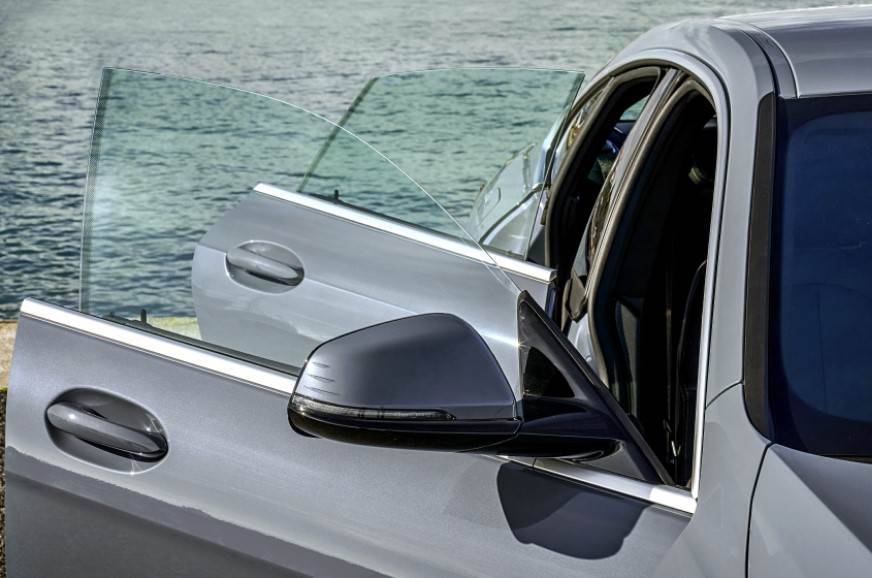 Pillar-less doors add a sporty look to the car.

Get into the cabin and you soon realise, this is no bottom feeder – it feels just as nicely put together as a whole raft of BMWs. The cabin is slightly narrower and a bit tighter than the 3, but the driving position is spot on and seat comfort is exceptional. The largish front seats offer generous side support, the cushioning on the thick seats is just right, and the best bit is that once you are nestled in the seat, it just holds you in place. 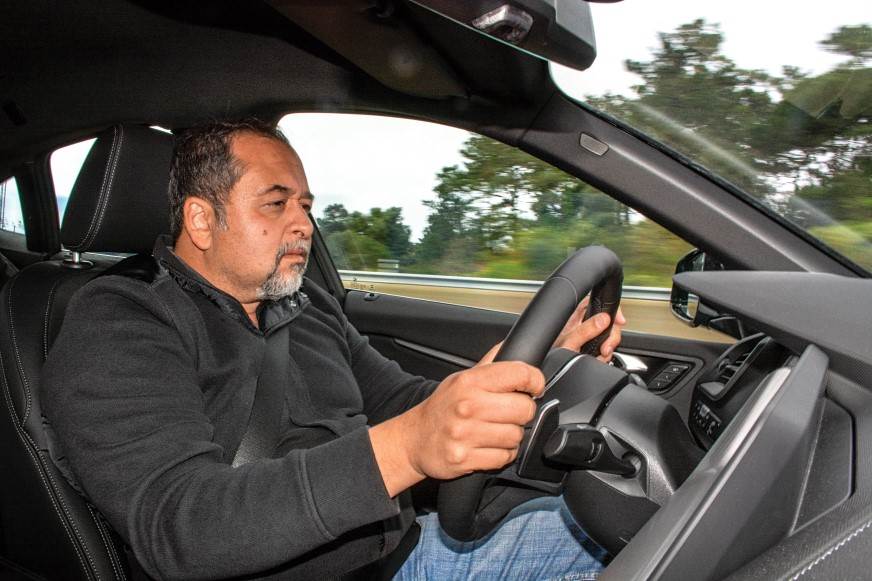 What betters the experience is that everything you touch is of very high quality. The top grain leather-wrapped steering with its aluminium frame and thick rim feels delicious to hold, and the sintered aluminium paddles behind the wheel feel beautiful to use. BMW’s digital instrument panel at the front is also tack-sharp, the iDrive touchscreen is bright and slick to use, and since the air-con vents and buttons that surround it are shared with the new 3 Series, quality levels are very good. So it looks like a BMW on the outside and on the inside, and even feels and functions like one, but the question is, does it drive like one?

Which engines are on offer?

The 190hp diesel engine, the same unit under the bonnet of the 320d, has a fair amount of grunt; and remember, this car is lighter. The engine is more refined at low and medium speeds to begin with, low-speed grumble is a lot more subdued, and what’s nice is that the midrange feels muscular when you flex your right foot; it has a strong 400NM of torque after all. There’s less of a spike in the power delivery due to the Euro 6 tuning, and combustion is smoother, but since this diesel is still happy to rev, pulling it past 4,500rpm is very productive. It’s quick too – 0-100 comes up in a claimed 7.5sec, and go past that figure and there’s no let-up in performance either. So there’s plenty of performance on tap. BMW has even specified it with an improved version of its 8-speed gearbox that’s smooth and quick. So yes, if it’s a diesel you want, this engine is unlikely to disappoint.

Even the ride is impressive. Now you’d think that because this car is compact and BMW wants to make it fun to drive, the suspension will be stiff and the ride hard. This, however, isn’t the case. The ride quality is actually very pliant. The suspension is extremely silent (even over poorly paved roads), the springs absorb road shocks without tossing you around, and then the damping is superb; there’s no real discernible secondary movement as the suspension settles very quickly after every hit. 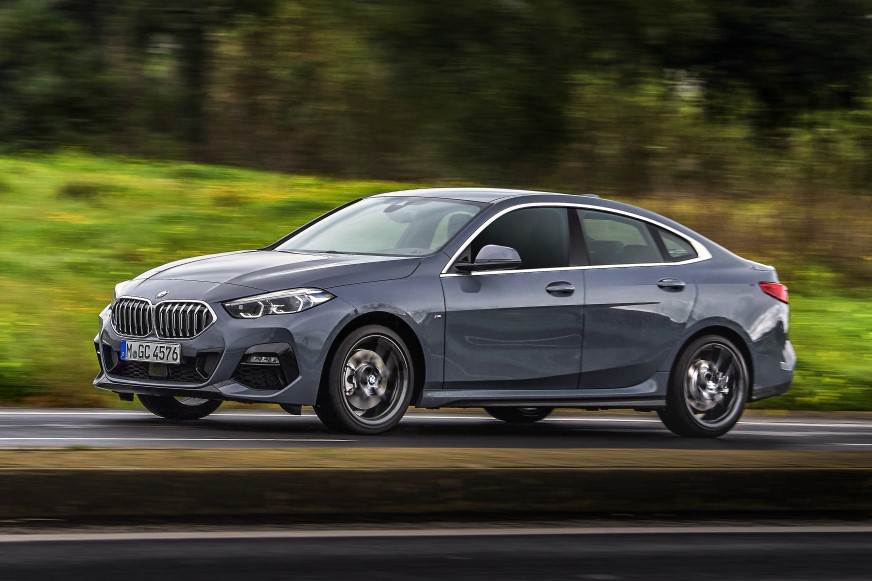 It’s nowhere as nice as a 3 Series to drive, but is pretty good in isolation.

It’s no 3 Series when you get to corners though. But then how can it be? No front-wheel-drive car can ultimately drive like a rear-wheel drive, and, in that way, the 2 Series Gran Coupe is fundamentally different. Still, as long as you don’t drive it like you are on a rally stage, the 2 Series manages a fair imitation. There’s a good amount of heft and feel at low and medium speeds from the steering without it feeling heavy, the 2 Series feels nice and stable, and then when the roads open out and hug the craggy coast on the outskirts of Lisbon, it feels nice and connected. There’s no early onset of understeer – a limiting factor on all front-wheel-drive cars – and BMW must be commended for that. So this may ultimately turn out to be the best driving car in its class. 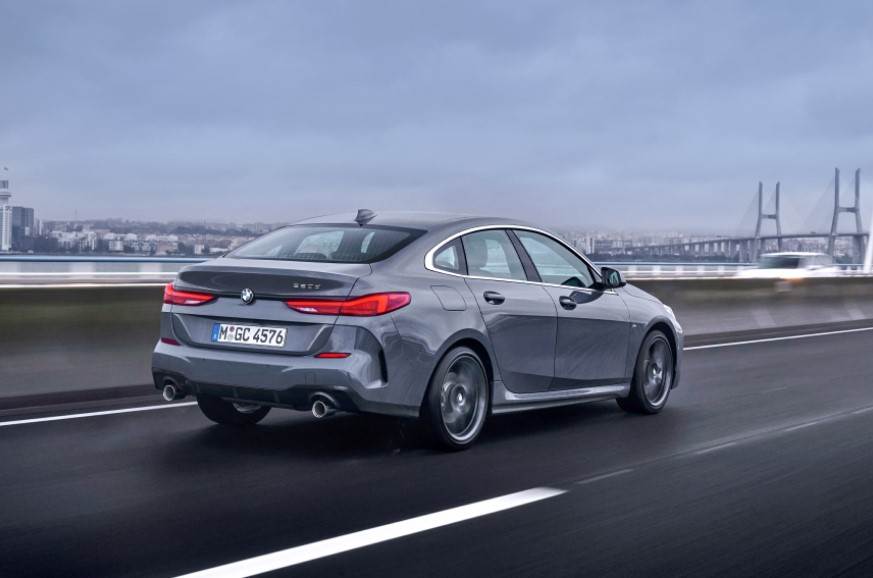 Drive harder, however, and you soon miss that rear-wheel-drive fluidity and balance. Go hard on the brakes before a corner and it seems to affect turn-in, the 2 Series taking its own sweet time to do your bidding; you need to wait a bit and that numbs the experience. And then as you begin to add power on the way out of the corner, there’s a bit of a shuffle too, as the torque from the diesel overwhelms the front wheels. So if it’s not the ultimate driving experience you’re after, the 2 Series Gran Coupe works well.

It even works well if you are sat in the rear, especially considering the cars it is up against. The rear doors are small, and you certainly can’t just ‘walk’ right in, but once you settle down, space and comfort are pretty decent. It isn’t as wide as a 3 Series, but rear legroom is sufficient, and headroom is good enough for even for six-footers. You will make contact with the roof if you are any taller, but what nice is that the backrest recline is comfy, and the rear seat is placed slightly higher than the front seats, so visibility out is good. Thigh support isn’t great, however, and despite the car being wider than the A-class limo on the inside, you can’t sit three abreast in comfort. 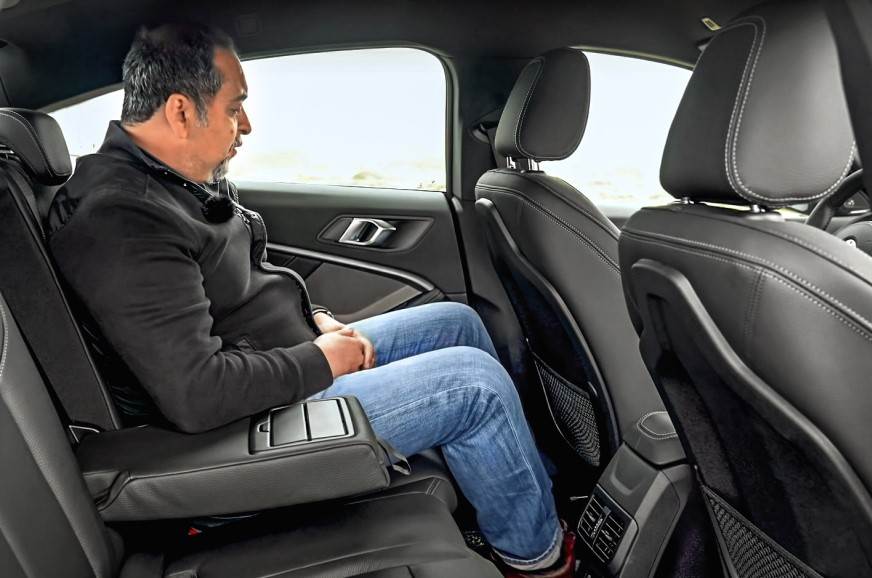 A bit tight on space but seat comfort is good.

BMW has even provided plenty of kit. There’s wireless charging on the centre console, with a clever ledge to hold your phone in place. There are strips of funky trim that light up in bright colours, and the 2 Series Gran Coupe comes with a raft of safety equipment similar to that on a 3 Series. It even gets gesture control with some new gestures that work nicely once you get used to them. 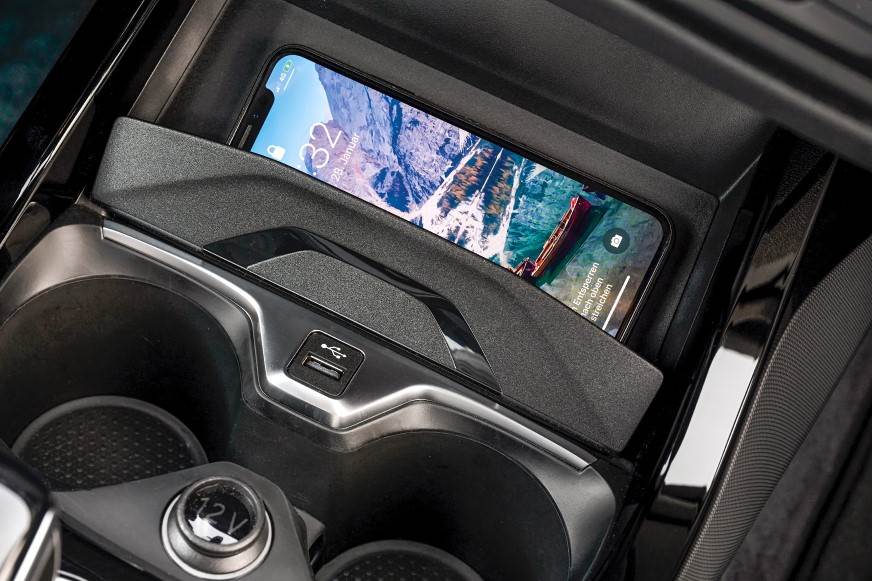 The 2 Series Gran Coupe is expected to come to India with two engine options. The 220d driven here will be one of them, but then we’ll also get the 220i with a 192hp, 2.0-litre petrol engine. Interestingly, BMW feels its three-cylinder 218i with 140hp isn’t suitable for India. The BMW 2 Series Gran Coupe’s prices in India are likely to start around Rs 32 lakh, going up to Rs 38 lakh for the top-of-the-line variants. 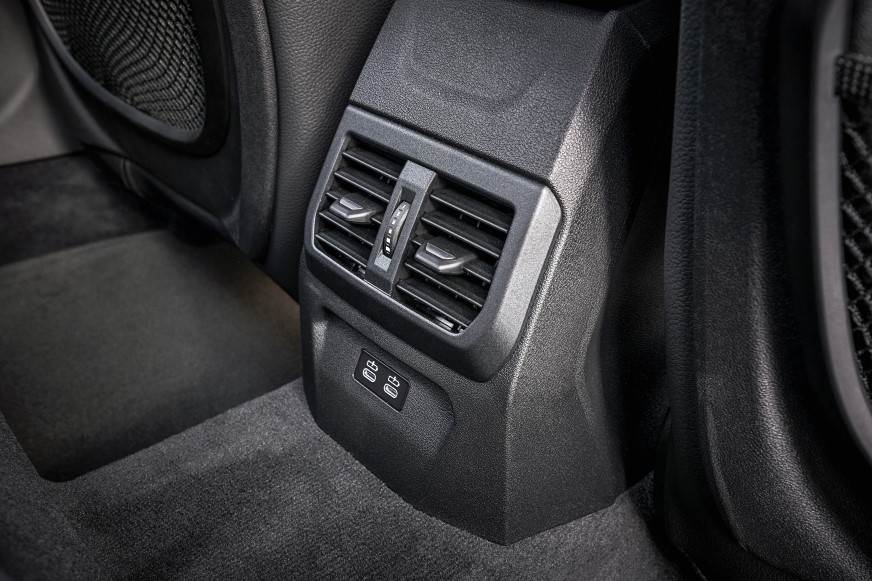 BMW's 2 Series Gran Coupe works well on many levels. If you’ve always wanted a BMW sedan but couldn’t stretch your budget as far up as the 3 Series, the 2 Series is sure to have tremendous appeal. The high-quality cabin delivers a genuine BMW experience, the performance of the diesel engine is strong, the ride is extremely comfortable and it is pleasant to drive too. Even the zingy petrol with 192hp should be bags of fun. Yes, the cabin is a bit cramped like the rest of the cars in this class and not everybody will fall for its looks, but if you are looking for a more accessible and affordable BMW sedan that does most things right, the 2 Series Gran Coupe could just be it. Just don’t expect it to drive like a 3 Series.