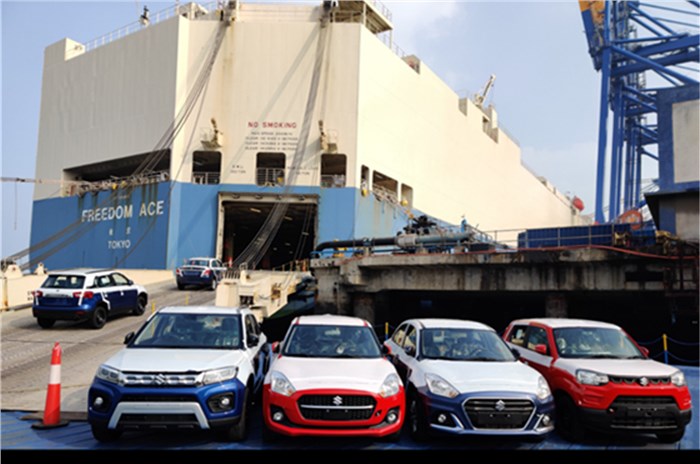 Maruti Suzuki has been exporting cars from India for 35 years now, and crossed the two million mark last February.

Maruti Suzuki announced on Monday that the company has exported 2,05,450 vehicles in calendar year 2021 – the highest ever export figure by the company. This is particularly noteworthy as it came at a time when the automotive industry was severely disrupted by the pandemic and the global semiconductor crisis.

Maruti Suzuki exports: highest ever in 2021

Maruti Suzuki regularly sells over a lakh vehicles in the domestic market each month, but exporting over 2 lakh vehicles in a single calendar year is a first for the company too. Maruti’s top five most exported models of last year included the Baleno, Dzire, Swift, Spresso and the Vitara Brezza. In total, Maruti exports 15 models from India, including the export-only LHD Jimny and the recently launched all-new Celerio.

Maruti Suzuki has been exporting made-in-India vehicles since 1986-’87, with the first large consignment earmarked for Hungary. Since then, Maruti has expanded its network to over 100 countries, and in the last 35 years of operation, the carmaker has exported 21.85 lakh vehicles out of India. Popular export markets for Maruti Suzuki include Latin American countries and ASEAN, African, Middle Eastern and neighbouring regions.

The company’s MD and CEO, Mr Kenichi Ayukawa, said, “Maruti Suzuki is dedicated to the Government of India’s vision of Make-in-India for the world. This milestone reflects the confidence of customers around the world in the quality, technology, reliability, performance and cost effectiveness of our cars.”

This is going to be a very busy year for Maruti as the carmaker has lined up a slew of new launches and updated models. The first of these to arrive will be the new Maruti Suzuki Baleno that’s expected to launch in the coming months with a comprehensive makeover.

Following that, there would be an equally comprehensive makeover for the Vitara Brezza expected to launch by the middle of this year. Maruti Suzuki also has updates lined up for the XL6 and Ertiga MPVs. Additionally, Maruti’s bread-and-butter model – the Alto – is also expected to finally see an all-new generation, with a launch expected by the year end.

What you are thoughts on Maruti acheiving this record export volume? Let us know in the comments below.