Despite being the bestselling car in August, Dzire sales have dropped 39.63 percent year-on-year. 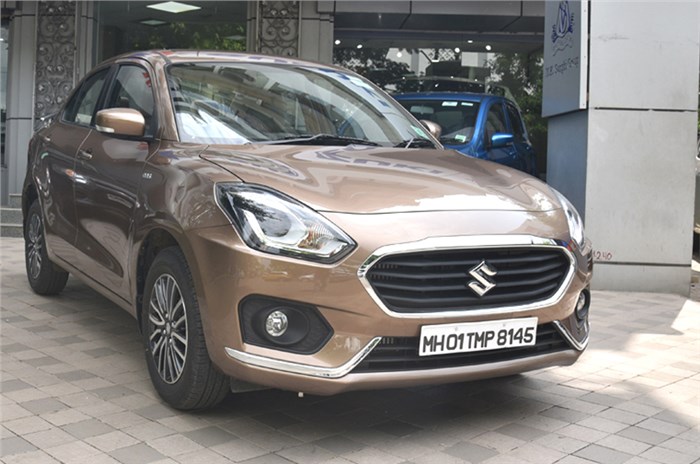 The New Maruti Suzuki Wagon R's stint as the new passenger vehicle boss, in July 2019 – which was mainly due to the poor sales in the PV segment – has turned out to be rather short. This month, the Maruti Dzire sedan is back on top, followed by another sibling, the Maruti Swift. In a market that fell by as much as 31.57 percent, year-on-year in August 2019 to a total of 1,96,524 units, the Top 10 PV list and its sales numbers for the month are quite a revelation.

The compact sedan has been a strong seller for Maruti Suzuki over its three generations and the company is looking to rev-up sales in a tepid market. For September 2019, Maruti is offering benefits worth up to Rs 90,000 on the compact sedan. These benefits are on the diesel model and buyers get a mix of cash benefits, an exchange bonus and a complementary five-year extended warranty package (diesel only) or its cash equivalent in additional discounts. The petrol model is being offered with benefits of up to Rs 60,000 across all its variants. The Dzire is powered by Maruti’s tried-and- tested 1.2-litre petrol and 1.3-litre diesel engines, both available with either a 5-speed manual or a 5-speed AMT gearbox option. The petrol unit has been upgraded to meet BS6 norms, with the diesel engine set to meet its end closer to the April 2020 deadline.

At No 2 is the Maruti Suzuki Swift, with August 2019 despatches of 12,444 units – down on the 12,677 units in July 2019, and the 16,330 units in June 2019. Maruti has recently introduced the BS6 Swift, albeit only in petrol guise. Like with the Baleno, the Swift’s 1.2-litre, four-cylinder K12B engine has been upgraded to comply with the more stringent emission norms. The 1.2-litre petrol mill continues to produce the same 83hp and 113Nm of torque, but has a slightly lower fuel-efficiency figure of 21.2kpl. The 1.3-litre DDiS 190 diesel engine has not been updated to BS6 specifications, since it is set to be phased out.

Additionally, the Swift now also gets more safety features as standard. To comply with the upcoming AIS-145 safety norms, all its variants now get a co-driver seat-belt reminder, a speed alert system, and rear parking sensors as standard. Previously, only dual airbags, ABS with EBD and a driver-side seat-belt reminder were standard, and rear parking sensors were only available with the top-spec ZXi and ZDi models. Like with the Dzire, Maruti is currently selling the Swift with handsome discounts.

The New Wagon R drives in at third place. Built on a completely new platform, the latest tall-boy iteration has grown in almost all proportions. The Wagon R has also received a BS6 upgrade in its 1.2-litre petrol engine option. In August, the hatchback saw a total of 11,402 units dispatched, fairly down from the 15,062 units in July 2019 but better than June's 10,228 units. Dealers are offering benefits of up to Rs 25,000 across all variants of the tall-boy hatchback. Unlike its predecessor, the new Wagon R is offered with a choice of petrol engine options – the familiar 1.0-litre K10 unit and the new BS6-compliant 1.2-litre K12 petrol unit being used by the Swift and Dzire. Buyers can additionally opt for a factory-fit CNG model based on the 1.0-litre petrol version.

The Maruti Suzuki Baleno drives in at No 4 position with 11,067 units; an improvement over the 10,482 units of July 2019. The Baleno was the first in the Maruti stable to receive a BS6 upgrade, earlier in April whilst also getting a new 1.2-litre DualJet K12C petrol motor with mild-hybrid technology.

In fifth place is the entry-level hatchback, the Maruti Suzuki Alto with 10,123 units, down on July's 11,577 units. This is also considerably less than its 18,733 units in June and the 18,070 units it garnered in May 2018. The Alto was recently updated with a host of safety features in the wake of the upcoming norms in October, and was also introduced with a BS6-complying engine a full 11 months ahead of the April 2020 deadline. The car received a cosmetic makeover as well, and meets the upcoming crash- and pedestrian-safety regulations. Maruti’s long-standing bestseller is being offered with benefits of up to Rs 70,000 for both the 800cc Alto and the 1.0-litre Alto K10.

A Hyundai car takes the sixth spot. The Hyundai Grand i10 despatched 9,403 units, comprising 314 diesel variants and 9,089 petrol variants. However, the Hyundai vehicle that's making the news is the Venue, the Korean carmaker's first compact SUV.

The Hyundai Venue, the new No. 1 UV in India over the past two months, maintains its trajectory in the Top 10 PV chart for the third month straight. In August, it despatched 9,342 units, comprising 3,781 diesel variants and 5,561 variants. Since its launch barely four months ago, the SUV has sold a total of 34,739 units, giving Hyundai a new charge in the UV market and helping the Venue to now debut in the PV toppers' chart.

The Maruti Suzuki Eeco van, which was at sixth spot in July (9,814 units), is at the No 8 position in August. One may recall that this people-carrier sprung a surprise in May 2019 when it took sixth place with 11,739 units, crossing the 10,000-unit mark for the second time since its launch in January 2010, the last instance being in April 2019. Based on industry data, the van falls into the passenger vehicles category rather than utility vehicles.

The Maruti Suzuki Ertiga MPV is at ninth place with despatches of 8,391 units – down on the 9,218 units in July 2019. The Ertiga, in its new avatar, is going places. With its modern design, ample space, thoughtful features and a value-for-money package, the new Ertiga is ticking most of the right boxes for family and fleet buyers. Of the total 42,127 Ertigas delivered in the first five months of FY2020 and averaging 8,425 units a month, the MPV is setting a good pace – and that too, in depressed market conditions.

The Maruti Suzuki Vitara Brezza wraps up the Top 10 PV list with 7,109 units, far better than the 5,302 units it registered in July 2019. With increasing competition from newer rivals like the Hyundai Venue and Mahindra XUV300 (both of which are also available with petrol engines) and no petrol engine option yet in a market making a strong shift from diesel to petrol, Brezza sales have taken a hit.

However, Maruti Suzuki is currently in the final stages of readying a petrol-powered Vitara Brezza for the Indian market. The current-gen Vitara Brezza SUV has been on sale since 2016, with just a single diesel engine option mated to either a 5-speed manual or an AMT gearbox. Autocar India has reported a few months ago about Maruti developing a new petrol-powered Vitara Brezza, and also confirmed that the model will see its market launch in February, mostly likely at the upcoming 2020 Auto Expo.

India's PV industry is experiencing possibly one of the worst downturns in his history. While the UV segment seems to be driving out of the slowdown, the continued fall in passenger cars is rather worrying.