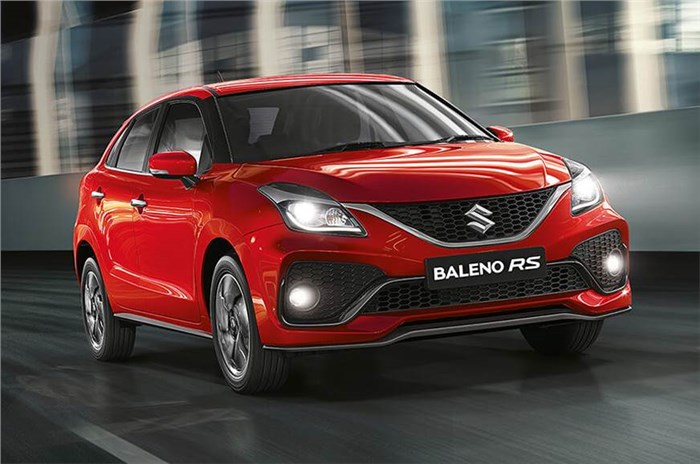 Maruti has revealed the prices for the Baleno RS facelift on its Nexa dealer website ahead of the model’s official launch. The facelifted hatchback is priced at Rs 8.76 lakh (ex-showroom, Delhi).

As with the standard Baleno model, the Baleno RS facelift gets a redesigned front fascia with a larger grille and a new bumper with prominent central air dam flanked by large faux-vents housing the fog-lamps and a chin spoiler. Down the sides, the profile remains unchanged, although the alloy wheels as per the single image appear to be new.

Under the hood, the 102hp, 998cc, three-cylinder Boosterjet powerplant from the pre-facelift model carries forward unchanged. The unit continues to be paired with a 5-speed manual gearbox as standard with no automatic gearbox option. Stopping power is provided by disc brakes on all four wheels.

There are no images of the car’s cabin yet – though as per dealer sources, the cabin for the Baleno RS forgoes the black-and-blue theme from the standard Baleno in favour of an all-black cabin to go with its sportier credentials.

The levels of equipment offered are at par with the top Alpha trim of the standard Baleno with kit that includes Maruti’s new SmartPlay Studio infotainment system, auto climate control, tilt- and telescopic-adjust steering, keyless entry and go, LED headlamps and electric fold wing mirrors, to name a few.

The Baleno RS facelift continues to rival the likes of the Fiat Abarth Punto, the Volkswagen Polo GT TSI and the Tata Tiago JTP. The new Baleno RS, when officially launched, will continue to be sold from Maruti’s premium Nexa dealership chain.