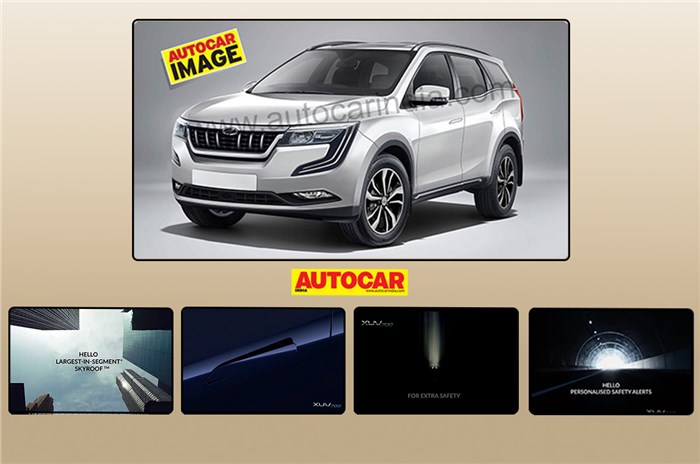 The Mahindra XUV700's global debut is just around the corner. A couple of weeks ago, we revealed to you class-leading power figures of the XUV700’s petrol and diesel engines. In the build up to its launch, Mahindra has been teasing some segment-first features of the XUV700. We tell you more about them.

The XUV700 will come with ‘Auto Booster Headlamps’ which Mahindra claims to be a unique safety feature. According to the company,  this feature automatically switches on additional lights to boost the headlamps when the SUV crosses the 80 kmph mark. The throw of the headlamps improves significantly with the Auto Booster function, enhancing safety at higher speeds at night, when visibility can be poor.

If there’s one thing Indians really want in their SUVs, then it has to be a sunroof. And Mahindra seems to be taking that a notch higher with what they are calling the ‘Skyroof’. Mahindra have revealed the dimensions of the panoramic sunroof to be 1360mm in length and 870mm in breadth. It will be the biggest sunroof in its segment as compared to its direct rivals - the Tata Safari, MG Hector Plus and all-new Hyundai Alcazar.

For cars sold in India, we already have a safety system in place that notifies the driver on crossing the 80 kmph mark, and another on crossing the 120 kmph mark. While every other car alerts you with a regular ‘beep’ sound on over speeding, the XUV700 will deliver you a personalized message to slow down, in the voice of our loved ones. Perhaps Mahindra believes this will be far more effective than a regular speed warning.

A feature that was first revealed by us more than a year ago, the XUV700 will come with new pop-out, smart door handles in place of the XUV500’s distinctive ‘cheetah claw’ handles. These new door handles sit flush with the bodywork, lending the SUV a very premium look. In fact, such door handles have so far been seen on much more premium cars such as certain Tesla or Jaguar models. However, it’s not clear if the door handles will featured power-operated pop-out function or will be a simple lever-type arrangement.

Mahindra is expected to officially take the wraps off the XUV700 either in late-July or sometime in Auguts. It’s then expected to go on sale in the market by September or October, 2021.