The new Grand i10 is bigger, better equipped and gets a set of updated powertrains. But how does the new entrant stack up against its rivals? 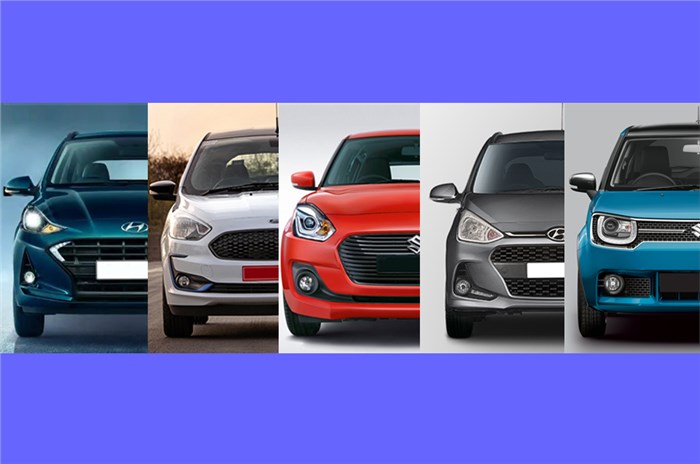 On August 20, 2019, Hyundai launched the Grand i10 Nios, what is technically the new-generation of the popular Grand i10 family hatchback, at a price of Rs 4.99 lakh (ex-showroom, Delhi). Following the Korean automaker’s latest design language, the Nios looks quite different on the outside and in the cabin.

The new hatch is also larger, which helps to maximise space and comfort. Add to that an updated, BS6-compliant petrol engine, and the option of a new automatic manual transmission for both motors, and the Grand i10 Nios comes off as all the more significant. Interestingly, Hyundai has announced that the Nios will be sold alongside the previous-gen Grand i10, which will position the newcomer just below the i20 premium hatchback.

As such, the Nios goes toe-to-toe with the hugely popular Maruti Suzuki Swift, the recently updated Ford Figo and the Maruti Suzuki Ignis in our market. So, how does the newest Hyundai stack up against its fiercest rivals? We take a closer look.

Unlike the previous-gen Grand i10 which was available globally in two guises – a short wheelbase model in Europe and a longer wheelbase version meant for India – the new i10 Nios has been engineered in to have just one wheelbase length for all markets.

To that effect, measuring 3,805mm in length, 1,680mm in width and 1,520mm in height, with a wheelbase of 2,450mm, the Nios is larger than the previous Grand i10 in almost every dimension. In numbers, it is 40mm longer, 20mm wider and sports a 25mm longer wheelbase. In order to give the new hatchback a more imposing stance, Hyundai has also bumped up the wheel size to 15-inches.

Interestingly, despite this spurt in dimensions, the Nios is eclipsed by the competition in almost every aspect. The Figo is 136mm longer and has a 40mm larger wheelbase. The Ignis is the tallest here, 75mm taller than the Nios while the Swift is the widest of the lot, 55mm wider than the latest Grand i10.

Starting off with the petrols, the Nios is equipped with a BS6-compliant version of the last-gen Grand i10’s 1.2-litre engine that retains its 83hp/114Nm state of tune. As such, it manages to match the Swift and Ignis on output but falls short of the Ford’s 1.2-litre and 1.5-litre engines.

With the upgraded BS6 motor of the Nios expected to make its way to the previous Grand i10 in the coming months, the Swift is the only other petrol hatch in the segment for the time being to meet the upcoming emission norms.

All contenders in the segment (except the larger capacity Figo) feature a 5-speed manual gearbox as standard. While Hyundai has introduced an all-new AMT auto gearbox option with the Nios (similar to the Swift and Ignis), it has also decided to pull the plug on the 4-speed torque converter unit that was previously available on the older Grand i10. In comparison, the 1.5-litre Ford is equipped with a traditional torque converter automatic transmission.

Coming to the diesels, Hyundai has decided to drop its 75hp, 1.2-litre engine from the old i10’s line-up altogether and instead introduce the same powertrain on the recently launched Nios. Though it may match the Swift in terms of output, it is easily outclassed by the larger capacity engine on the Figo. The Maruti Suzuki Ignis, meanwhile, does not come with a diesel engine option, though it did earlier.

In what will be a first for the Grand i10 line, the diesel version of the Nios is being offered with an automatic gearbox option; once again, an AMT. This should help the new Hyundai fare better against the Swift which enjoys a monopoly in the automatic-diesel hatchback category.

The Nios has been priced from Rs 4.99 lakh to 7.99 lakh, which puts it in a good position to take the fight to the current segment-leader, Maruti Suzuki’s Swift. A proper road test and comparison will be necessary to arrive at a definite conclusion but for now, the Hyundai Grand i10 Nios posses a very credible threat to the Maruti Suzuki Swift’s dominence in the segment.