Honda N7X SUV could be the next-gen BR-V

Likely to be unveiled in the coming months, next-gen BR-V will come with 1.5-litre petrol engine. 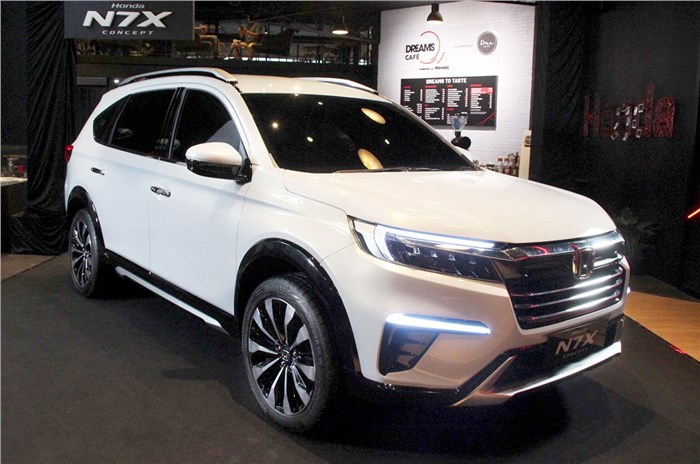 Honda is all set to unveil the production-spec version of the N7X concept, which it recently showcased in Indonesia. According to sources, this production version could be the next-gen BR-V. The new Honda SUV will go on sale in Indonesia later this year, followed by other markets.

According to a leaked document posted on Autonetmagz, the N7X SUV will spawn a production version, internally codenamed as DG3. A world premiere of the production-spec SUV could take place as early as August and the model will go on sale later this year.

The document even confirms that this new SUV from Honda will come with quite a few variants, all equipped with a 1.5-litre petrol engine. This is the same powerplant as in the Honda City and a few other global models from the brand. Power and torque output for this engine should be around 121hp and 145Nm, respectively. Gearbox choices will include a 5-speed manual and a CVT automatic. Though, it doesn’t seem the model will get a hybrid powertrain.

While the market name of the N7X production version is not yet revealed, sources tell us that the model will most likely be called the new Honda BR-V. While the Honda BR-V may not be on sale in India anymore, the three-row vehicle is a popular model in markets like Indonesia.

Honda N7X based SUV: What do we know so far?

In Indonesia, where Honda had unveiled the N7X concept, a production version of the model will be the brand’s answer to the popular Toyota Avanza, Daihatsu Xenia and other three-row midsize SUVs sold in Indonesia. The concept's familiar Honda design cues are expected to continue on the production car, which we feel would end up looking a lot like a smaller iteration of the CR-V.

As far as India goes, Honda pulled the plug on the slow-selling BR-V and the brand currently has no product in the 7-seat category in our market. While a production version of the N7X concept could be a good contender for India, there is no update from Honda on this vehicle. The company currently sells the City and the Amaze in India and is expected to launch a mild-hybrid version of the former in the near future.