Land Rover has finally unveiled the much-awaited fifth-generation Range Rover luxury SUV. Although one may not be able to tell at first glance, Land Rover’s flagship model has been completely redesigned, updated and upgraded in all respects and has been substantially electrified as well. The new Range Rover is making its debut following the culmination of a five-year, seven million-hour testing programme, before its global market launch in spring of next year.

This new Range Rover will spearhead a top-to-bottom overhaul of Land Rover’s line-up, where each model will be offered with a fully electric option by the end of the decade. The pure-electric version of the new Range Rover, which has been confirmed for launch in 2024, will be the brand’s first all-electric model. The new Range Rover is available in both standard and long-wheelbase forms, with the latter giving the option of seven seats for the first time. It will be available with a range of petrol and diesel engines at launch, with a plug-in petrol hybrid following in about three months’ time.

The Range Rover’s distinctive silhouette remains fundamentally intact, with a rising shoulder line, short overhangs, a ‘floating’ roof and a clamshell bonnet, but differences between it and the outgoing car are extensive. 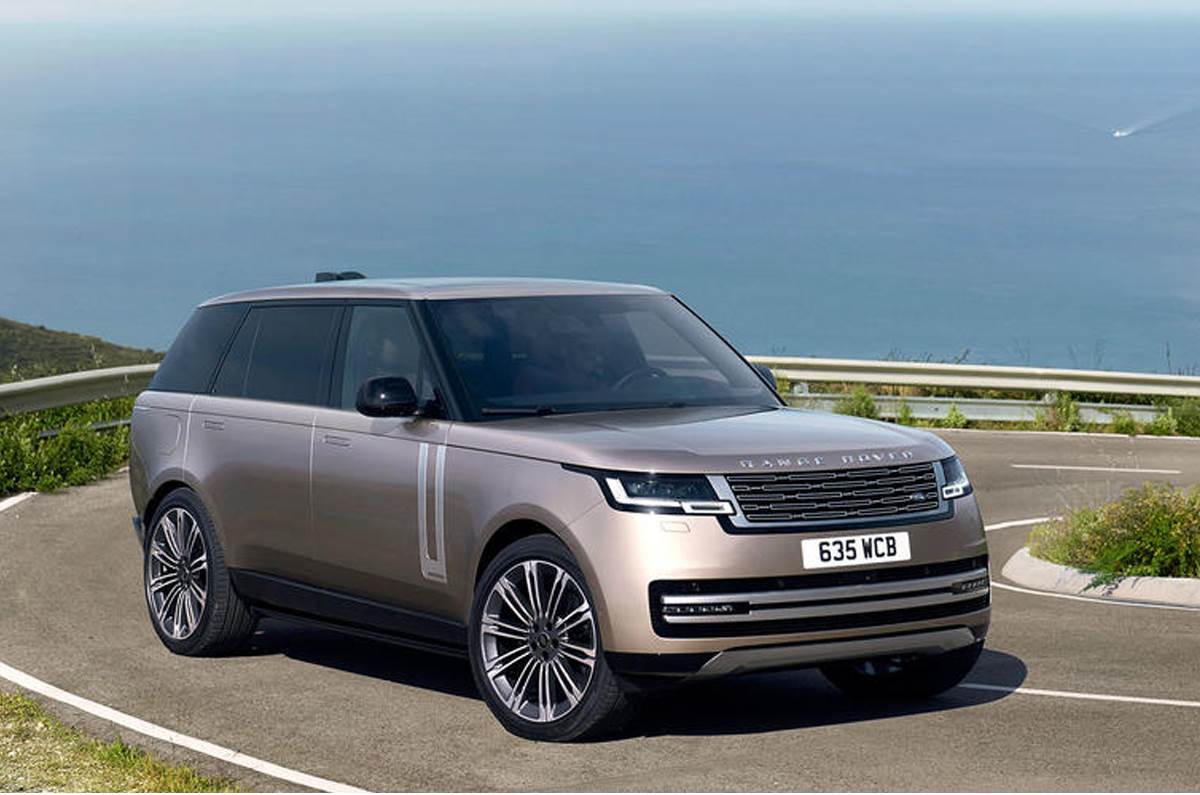 The most obvious differentiator is the addition of a sizeable gloss black panel at the rear, incorporating vertical brake lights at the side and indicators in a bar across the top, all of which are invisible when not in use. Land Rover says this new set-up will become a Range Rover “signature”, suggesting it will eventually appear on the next-generation Evoque, Range Rover Sport and any Velar successor. The tail-lights are said to use the most powerful LEDs in existence, while at the front, each headlight cluster contains some 1.2 million individual mirrors that reflect light from a rear-mounted mirror.

The ‘gill’ motifs and grille of the old car have been redesigned, and the pop-out door handles first seen on the Velar give a sleeker look. A focus on increased aerodynamic efficiency is also evident in the Range Rover’s new look, and as a result, the new car has a drag coefficient of as little as 0.30, which represents a 12 percent improvement. The new rear-end design retains a significant level of functionality and utility. The split-folding tailgate continues to operate as before, with the lower portion folding down and the rear screen rising up. 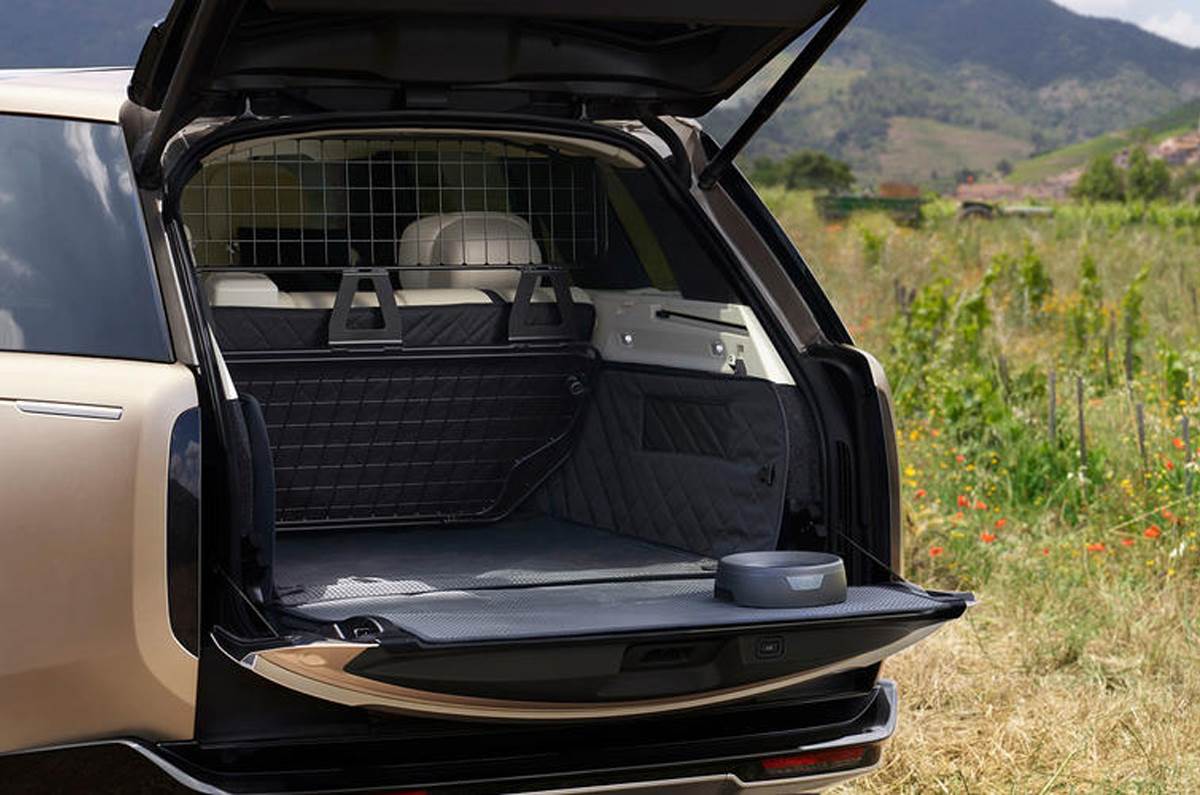 The interior of the new Range Rover has been completely revamped too. The design is in line with newer Land Rover models, but the real focus has been on luxury and opulence.

A new floating 13.1-inch infotainment screen hosts most of the primary controls and functions. It runs the latest generation of Land Rover’s Pivi Pro operating system and uses a customisable three-tab home screen giving access to 90 percent of functions in as little as two presses, and haptic feedback is now standard across the range. Wireless smartphone mirroring and Amazon Alexa speech recognition are included on all models. 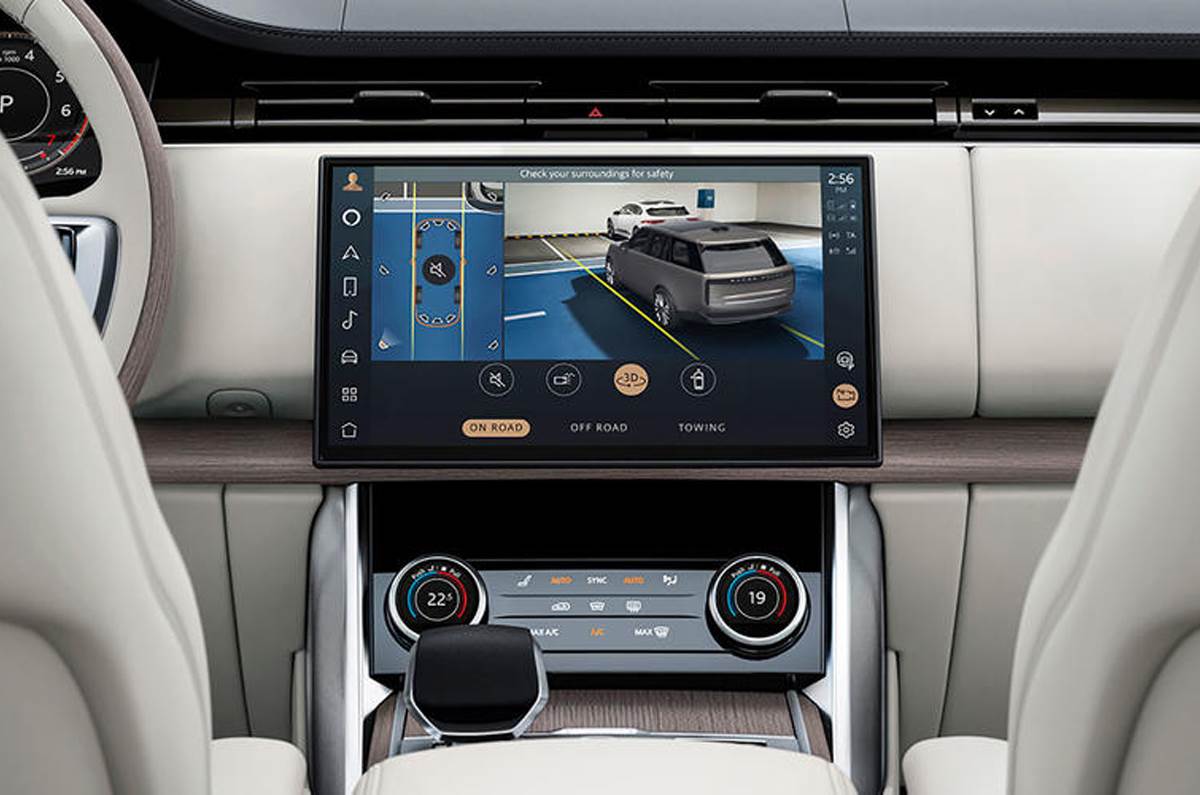 It also gets a new 13.7-inch high-definition digital instrument cluster and an uprated head-up display. Fortunately, there are physical dials for the climate control incorporated on a touch-based panel, the steering wheel is all-new, and the centre console with a stubby gear lever has a clean and minimalist look. At the back, a pair of 11.4-inch touchscreens and an 8.0-inch touch control panel are provided for passengers. 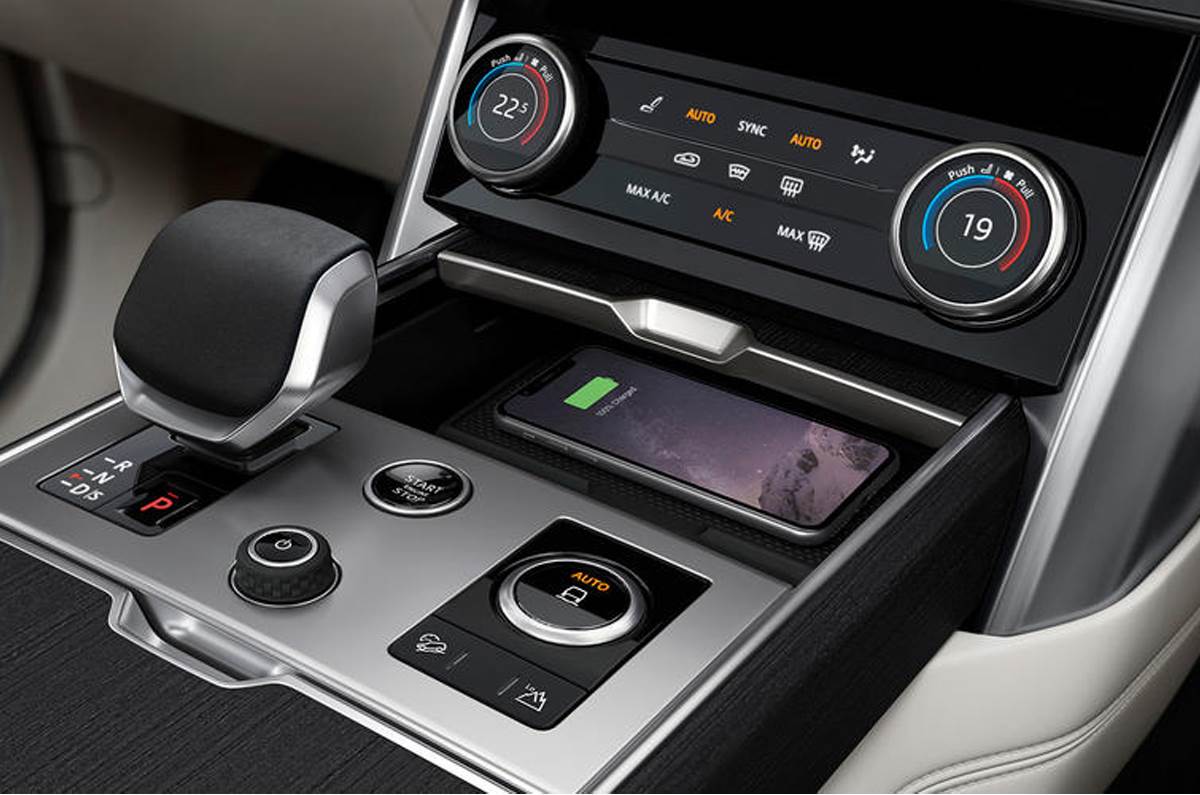 The standard model is 75mm longer than before, at 5,052mm, giving improved rear legroom, while the long-wheelbase option has 200mm of extra space between the axles. Legroom in the middle row is put at more than one metre in the longer model, and Land Rover says even six-foot-tall adults can sit comfortably in the new third row.

The new Range Rover pioneers JLR’s new MLA ‘Flex’ architecture, bringing 50 percent more torsional stiffness and 24 percent less structure-borne noise than the underpinnings of the outgoing Range Rover, chiefly through the use of mixed metals and a set of ‘rings’ built into the body shell for maximum rigidity.

The structure is made up of 80 percent aluminium but with extensive use of steel in key areas for improved crash protection and sound deadening. Its enhanced stiffness has been achieved even with a full-length, and standard, panoramic sunroof. The structure has also been designed to maximise efficiency: the so-called ‘aero shields’ run the length of the car’s underbody to channel air efficiently towards the rear, and even the rear suspension elements have their own aero-optimised covers that “deliver a controlled separation of the underbody airflow”.

Overall, the MLA structure is slightly heavier than its predecessor but, along with improvements in several crucial areas, it allows the fifth-generation Range Rover to be offered with both internal combustion and electric powertrains.

There has been a shake-up of the Range Rover’s powertrain offering. There are now no four-cylinder options, the plug-in hybrids use a completely new powertrain with significantly improved performance and the top-rung model swaps its supercharged 5.0-litre, V8 for a twin-turbo BMW unit.

The range opens with a choice of 3.0-litre Ingenium straight sixes (two petrol, three diesel), all with 48V mild-hybrid assistance and power outputs ranging from 246hp in the entry-level D250 diesel to 395hp in the P400 petrol. 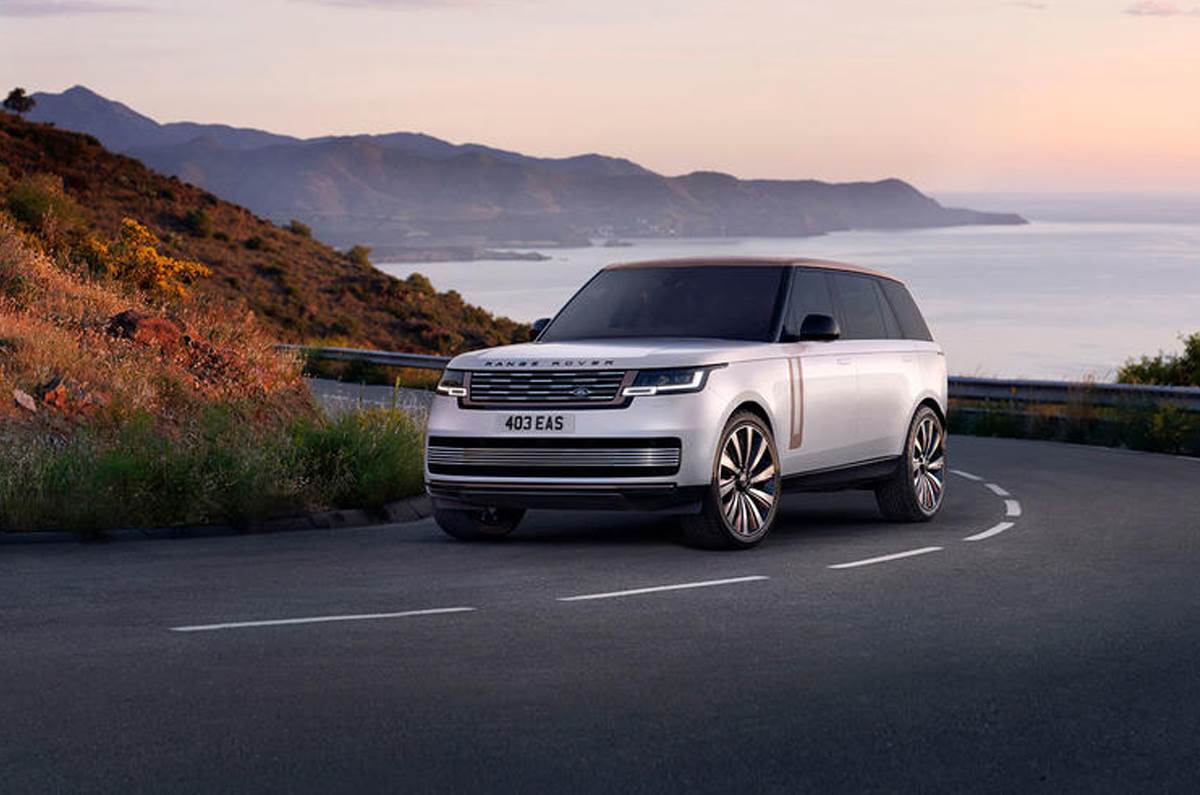 Around three months after launch, these will be joined by a petrol-electric plug-in hybrid option with a new floor-mounted 38.2kWh battery that has a WLTP-certified electric range of 100km, giving the Range Rover one of the longest electric ranges of any PHEV on sale. The new ‘Extended Range’ PHEV variant, based on a six-cylinder engine for the first time, offers combined outputs of either 434hp and 620Nm or 503hp and 700Nm, and is estimated to be capable of covering 75 percent of all journeys with the engine off, according to Land Rover’s research.

It is also equipped with 50kW charging capacity, so an 80 percent charge can be achieved in less than an hour, while a brake regeneration system helps top up the battery.

The line-up is capped by the performance-oriented V8, which now shares its motor with BMW’s most potent offerings as part of a new powertrain-sharing agreement between the two firms. The new V8 model makes 523hp and 750Nm and is capable of hitting 100kph from rest in 4.6sec. All engines are paired with an 8-speed ZF automatic gearbox, with a low-range setting for towing and low-speed off-road driving.

The new Range Rover’s suspension and steering have been completely overhauled, and despite dramatic boosts in on-road refinement, Land Rover is adamant that its flagship remains as capable off road as it is on it. 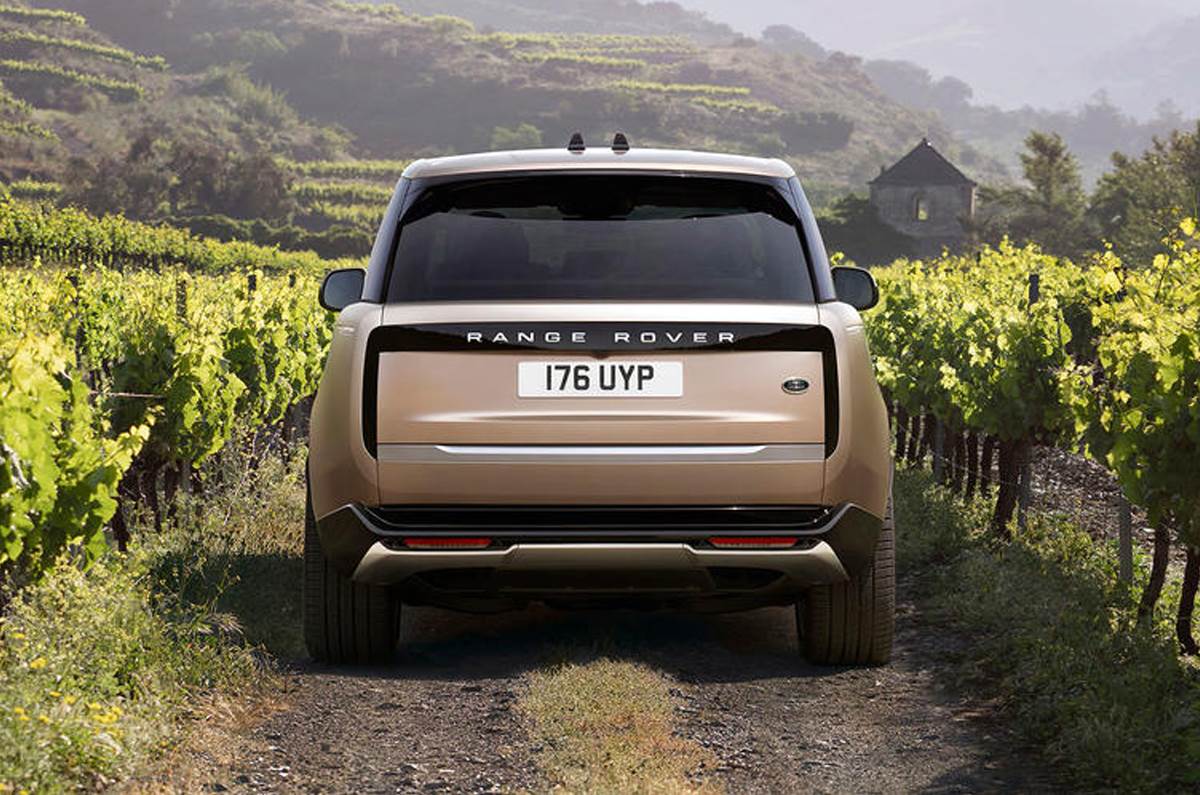 A dedicated Wading mode allows it to drive through water up to 900mm deep (matching the much more rugged Defender), it has departure and approach angles of 29 degree and 34.7 degree, respectively, and it can drive at angles of up to 45 degree. Its ground clearance of 295mm can be raised a further 145mm in the highest of the model’s four suspension settings. On Tarmac, a 48V-powered anti-roll system with 1,400Nm of torque prevents excessive body roll under hard cornering. It also gets all-wheel-steering as standard.

For the first time, the Range Rover comes equipped with a five-link rear axle, which allows for greater adjustability, while twin-valve Bilstein dampers, which can react to bumps within five milliseconds, offer fully adjustable rebound and compression settings. The vehicle automatically lowers by 16mm at cruising speed for improved aerodynamics. 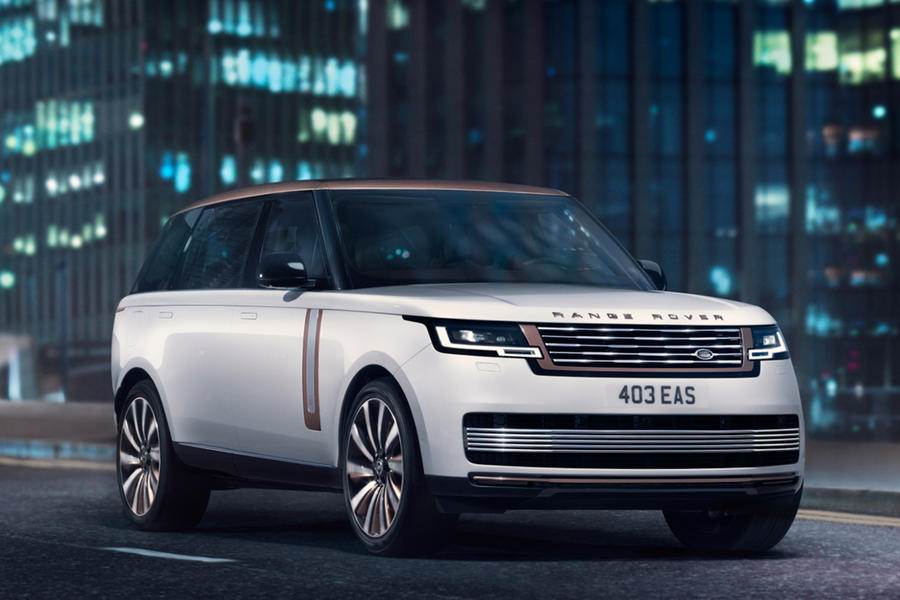 With heightened levels of personalisation, the SV replaces the old car’s range-topping SVAutobiography trim and is offered with a choice of four and five ‘executive class’ seats in both standard and long-wheelbase forms. In the rear of the four-seat car is a centrally mounted table that rises out of the centre console and can be folded and swivelled to suit either rear passenger. The dual rear touchscreens are also upgraded to 13.1-inch units. 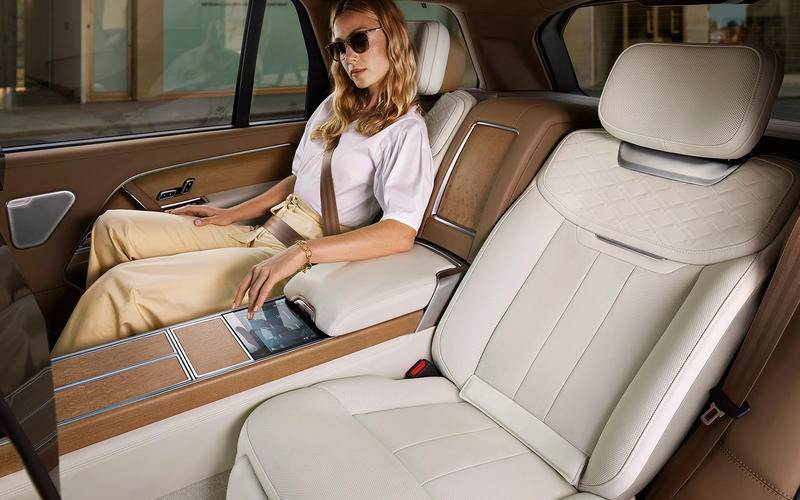 In place of a central seat, the SV continues to offer a champagne fridge. The SV features 23-inch wheels, the largest yet fitted to a Range Rover, and has the option of a ‘duotone’ interior, with front and rear seats finished in different colours and materials.

The new Range Rover will go on sale globally in the second quarter of 2022, and it is expected to make it to our shores later in the year, given that its predecessor was on sale in India too.

Through 2021, Land Rover has taken to updating and streamlining its model line-up with introduction of models such as the facelifted Discovery and updated versions of the Range Rover Velar and Range Rover Evoque.