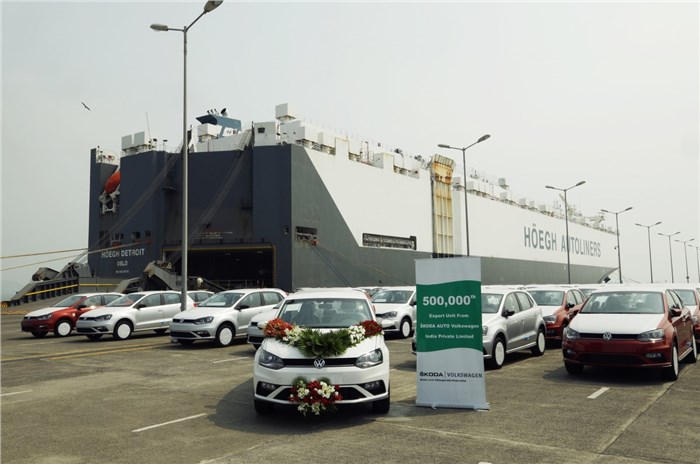 Skoda Auto Volkswagen India Pvt Ltd (SAVWIPL) has achieved the milestone of exporting its fifth lakh made-in-India car. The company says the milestone model is a white Volkswagen Vento (left-hand drive), which is part of a shipment of 982 cars being exported to Mexico from the port of Mumbai. It has been a little over a year since the VW Group in India merged its three passenger car entities to form SAVWIPL.

It has taken SAVWIPL a decade to achieve the milestone, since it first began exports from India in 2010. The brand claims it has exported over 25,000 cars in the current year, marking a consistent export performance, despite of the challenging demand scenario around the world.

Gurpratap Boparai, MD, Skoda Auto Volkswagen India said, “Exports are an integral part of our strategy and achieving five lakh units is a significant milestone for the company. Cars produced at the Skoda Auto Volkswagen manufacturing sites exemplify the high quality standards we pursue globally and in India. The achievement gains more significance as we continue to export vehicles despite the current challenges in the industry on account of COVID-19 disruptions. Over the next years, we will be producing cars based on the new MBQ A0 IN platform with a high degree of localisation and will continue to explore export markets for the India 2.0 products.”

Skoda Auto Volkswagen India started its exports programme in 2010, with 65 units of the India-built Volkswagen Vento for South Africa market. The company says it exports ‘Made in India’ vehicles to over 61 countries across South America, Central America, Africa, the Indian Subcontinent, Southeast Asia, the GCC countries and to the Caribbean region.

Going forward, the company’s new range of products starting 2021 will reach a higher level of localisation (up to 95 percent). The four new products developed for the Indian market for Skoda Auto and Volkswagen, consisting of SUVs and sedans, will be evaluated for exports to similar markets requiring robust built and efficient cars.

This confirms our exclusive report from 2018 on the next-gen Skoda Rapid and Volkswagen Vento coming in 2021. As we’ve reported earlier, the two new SUVs under the brand’s India 2.0 plan – the production-spec Skoda Vision IN concept and the final production version of the Volkswagen Taigun –will share the heavily localised MQB A0 IN platform, along with 1.0-litre and 1.5-litre TSI turbo-petrol engines. The SUV from Skoda will precede the VW Taigun to the market, with a launch for the production Vision IN expected in April-June 2021.