Here is everything that has changed on Toyota’s all-new premium hatchback. 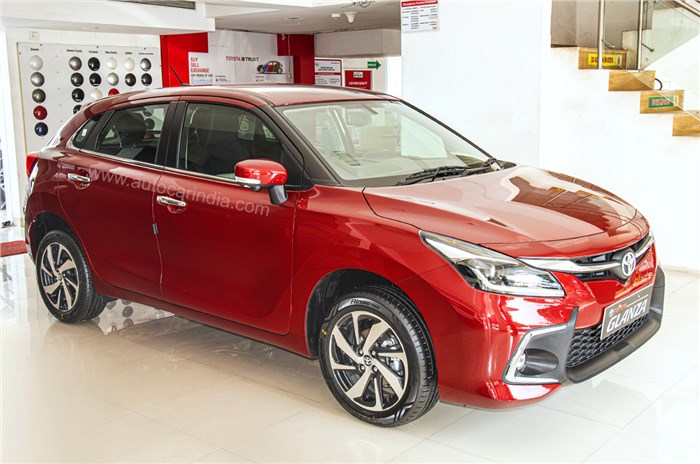 The new-gen Toyota Glanza has been launched hot on the heels of its cousin, the Maruti Suzuki Baleno. We recently got the opportunity to see the new Glanza in the metal for the first time and take a closer look.

Right off the bat, Toyota seems to have put in much more effort into making the new Glanza stand out when compared to the new Baleno. This wasn’t the case with the previous model, which essentially looked like a Baleno with Toyota badges slapped on to it. 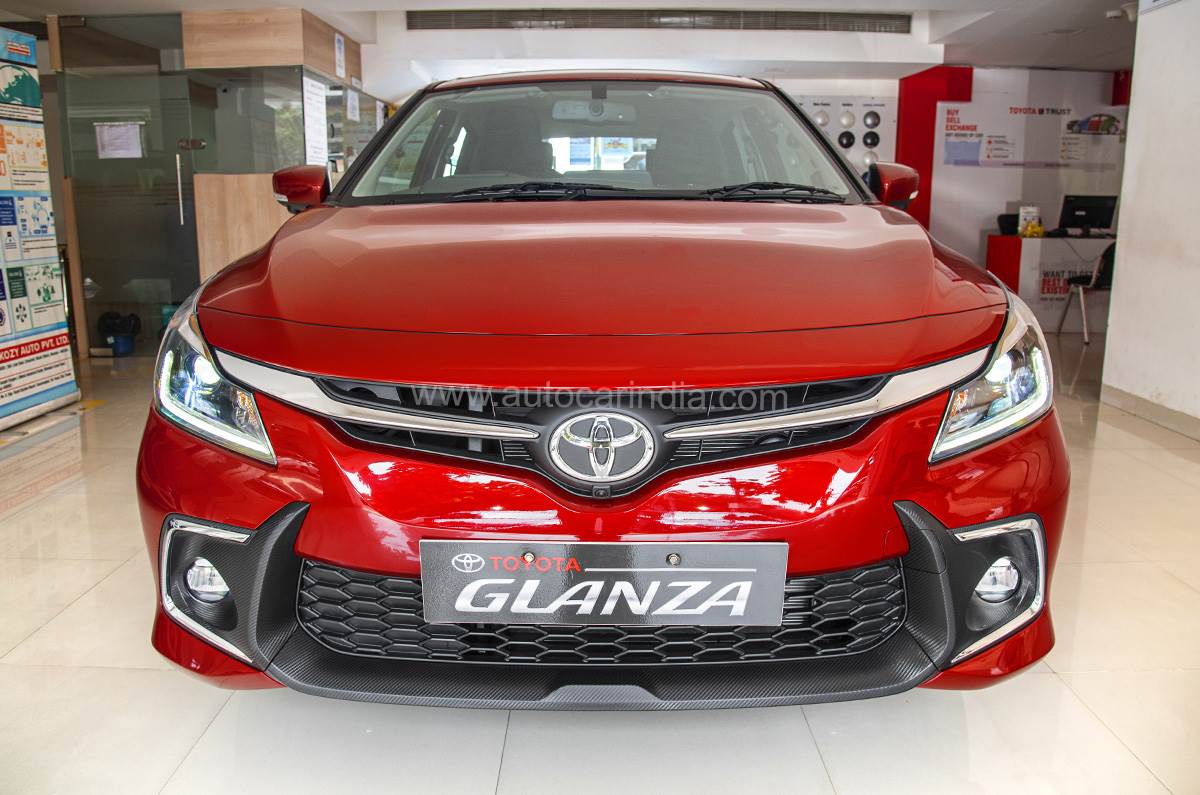 Up front, the Glanza gets a slimmer grille design that is much more in line with the brand’s latest offerings, a sportier, re-profiled bumper that has faux carbon fibre inlays and new headlights with L-shaped Daytime Running Lights (DRLs), instead of the three-block DRLs on the Baleno. 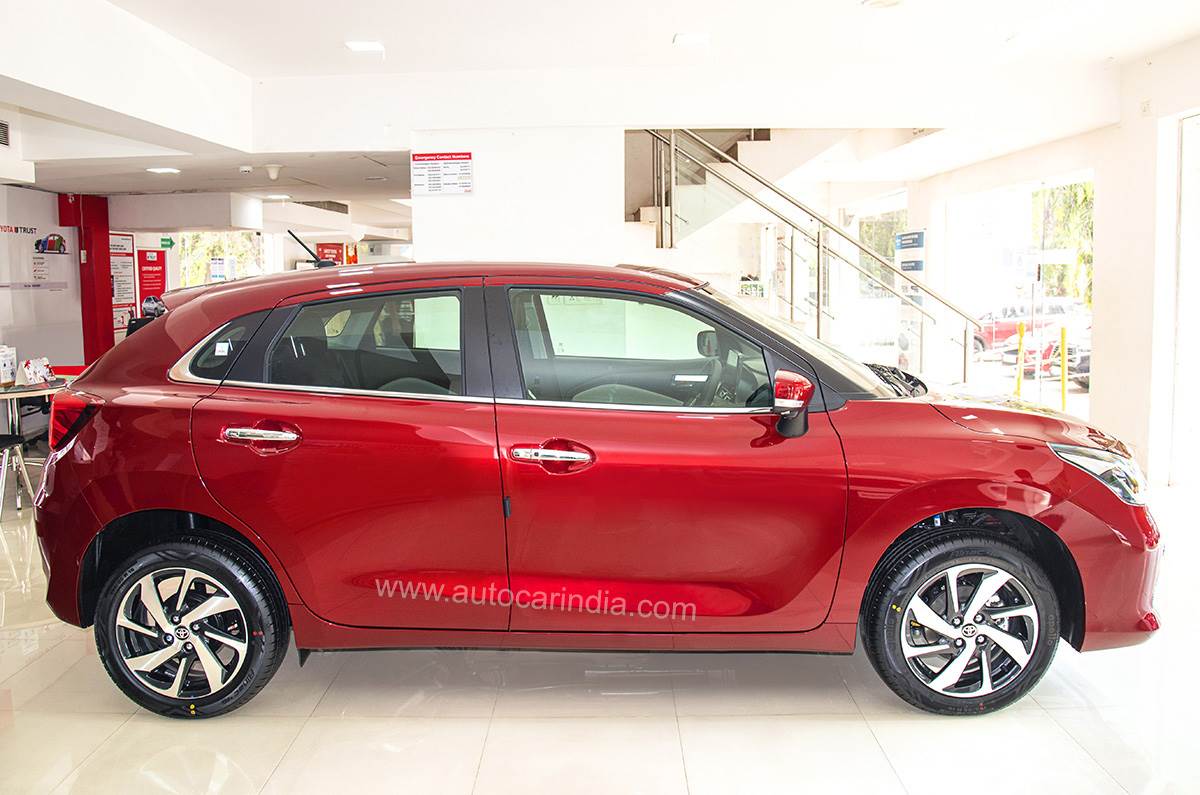 Sadly, the styling differences are largely limited to the front alone. At the sides, there’s a slightly different design for the 16-inch alloy wheels. At a traffic light, the badging on the wheels will be the biggest giveaway that the car next to you is a Toyota. 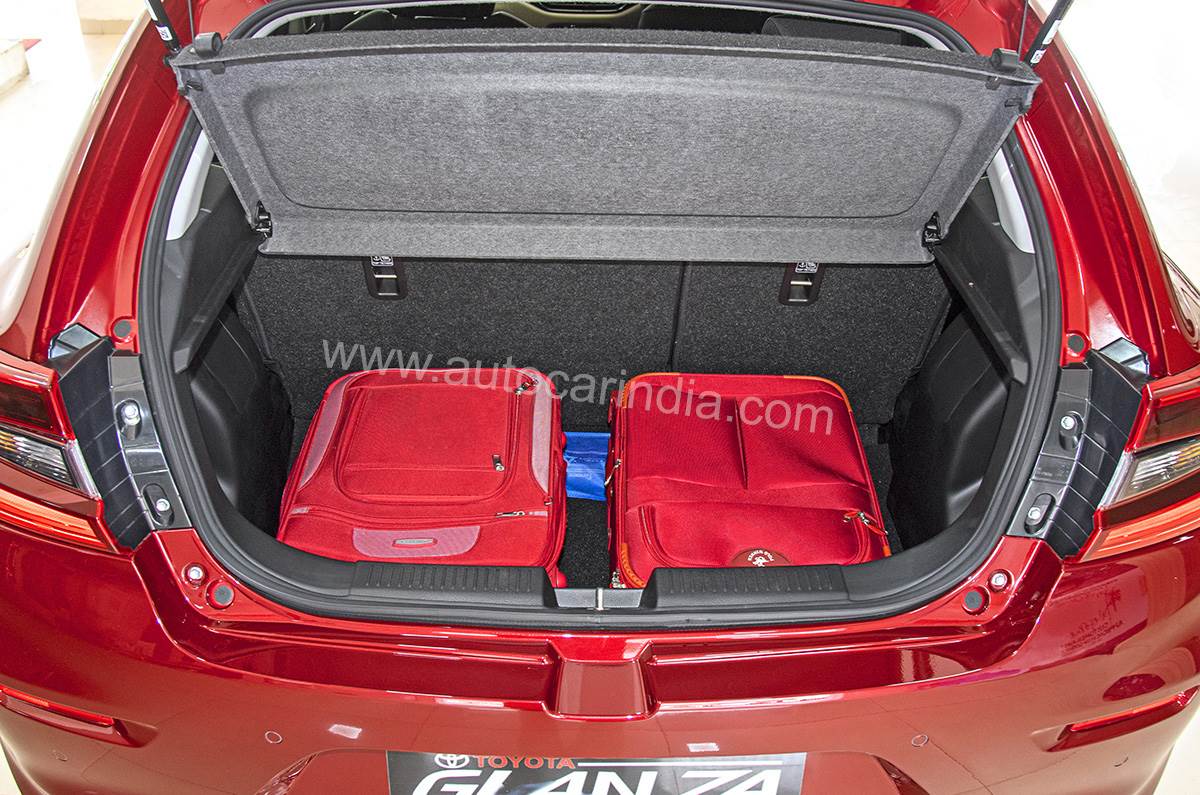 It’s the same story at the rear as well with the simpler LED elements in the tail-lights, along with the Toyota and Glanza badges being the only differences. The boot lid opens to reveal a sizeable 318-litre luggage area, which is deep, but you’ll need to lift heavy bags over the high loading lip.

Inside, the differences with the Baleno are limited, but they work. For instance, while the layered dashboard design with the free-standing touchscreen infotainment system is similar, Toyota has opted to use a black and beige colour scheme in the cabin – visible on the dashboard, door cards and seats – instead of the Baleno’s black and navy blue scheme, which gives it a more premium look. Additionally, as with the Baleno, the new Glanza has also taken a step up in quality. There are no soft touch plastics, but they still feel quite nice; the air-con controls look upmarket and even the leatherette wrapped steering is great to hold. 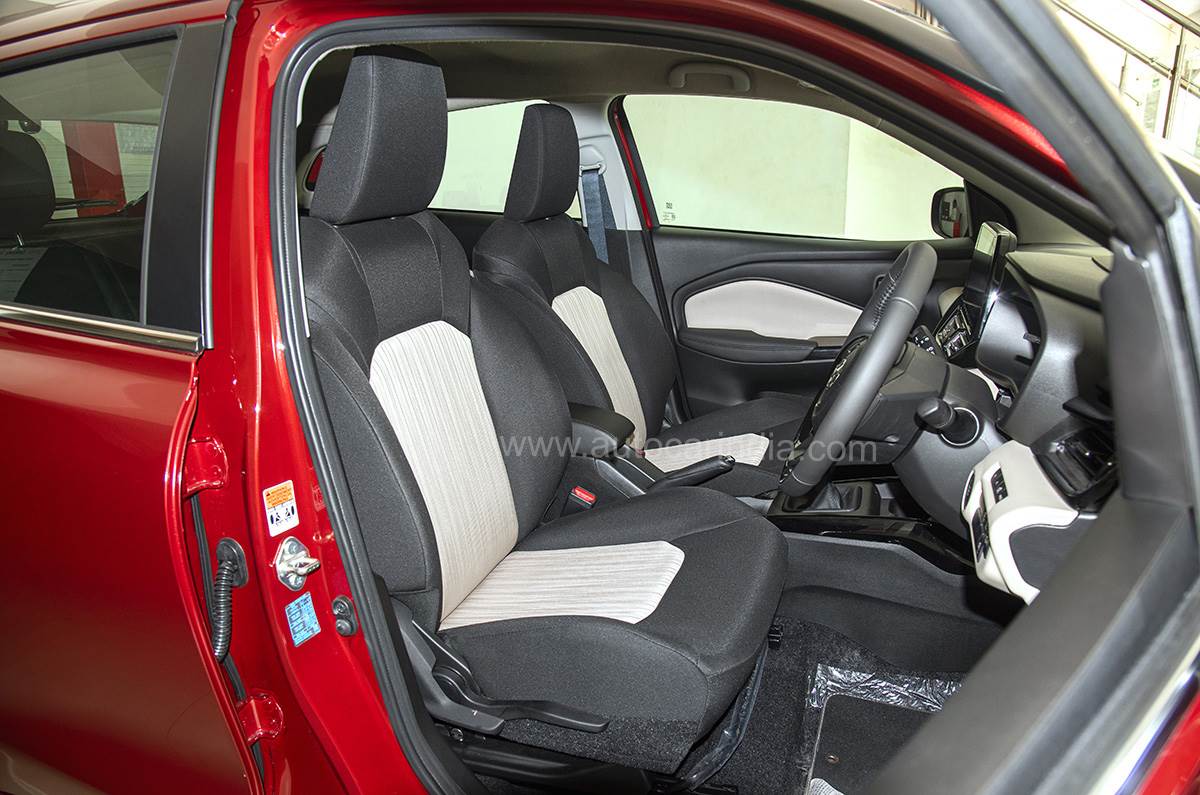 In terms of front seat comfort, the sculpted seats provide a good amount of support and comfort, even for larger occupants. Rear seat space also continues to be a highlight for the Glanza as there is ample knee room, even for taller passengers, however, headroom is a bit tight for anyone over 6 feet.

2022 Toyota Glanza: what features does it get?

The model featured here is the top-spec Glanza V that gets everything offered on the range-topping Baleno Alpha. The list includes a slick 9-inch touchscreen with connected tech, a 360-degree camera that shows an image of the car in its surroundings, but isn’t high res, and a pop-out heads-up display that gives info like speed, real-time fuel economy, current gear and even changing AC fan speed and temperature. Some popular features that rivals offer are missing here though, like a cooled glovebox, a tyre pressure monitor, digital dials, a sunroof and a wireless phone charger. 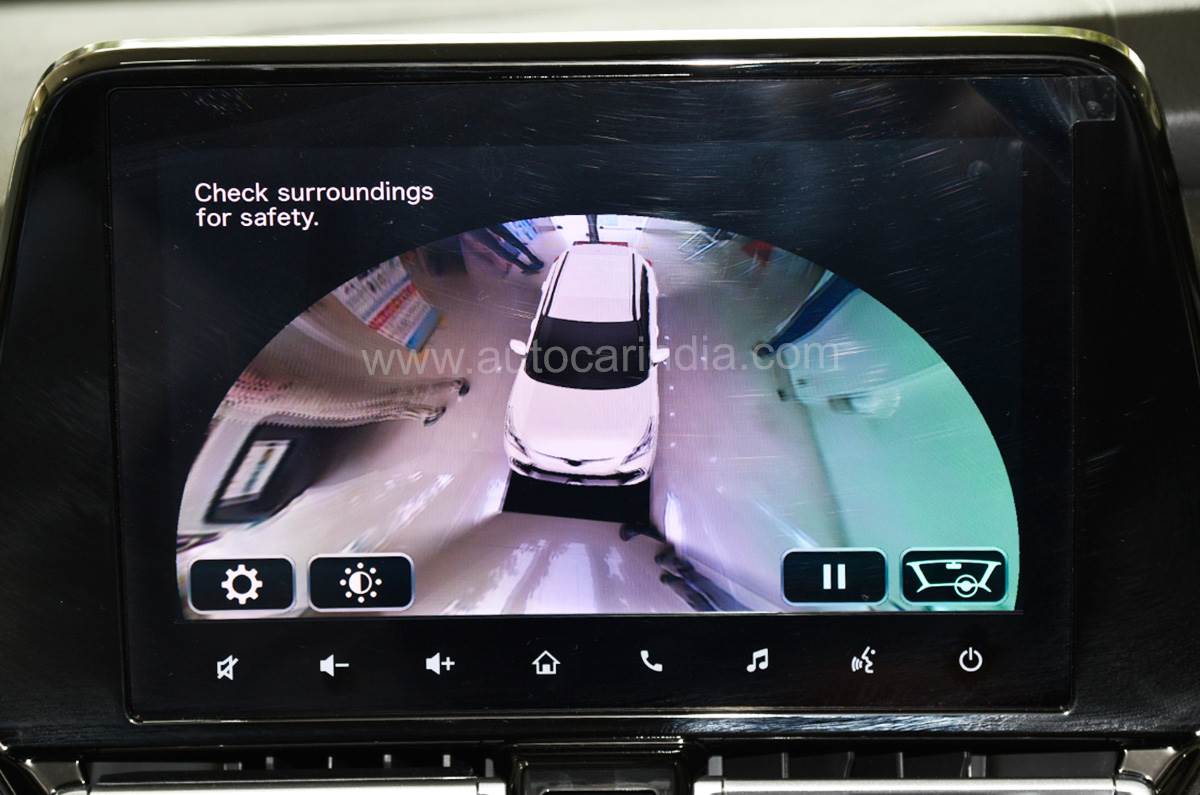 The Baleno and Glanza haven’t been crash tested by Global NCAP as yet, but do comply with latest Indian crash test norms. There’s also some comfort in knowing that the cars use more high strength and ultra-high strength steel in their construction, and the safety suite is much more comprehensive now, with six airbags on the Glanza’s G and V variants, standard fit ISOFIX child seat mounts and ESC and hill hold control on select variants.

2022 Toyota Glanza: what engine does it get? 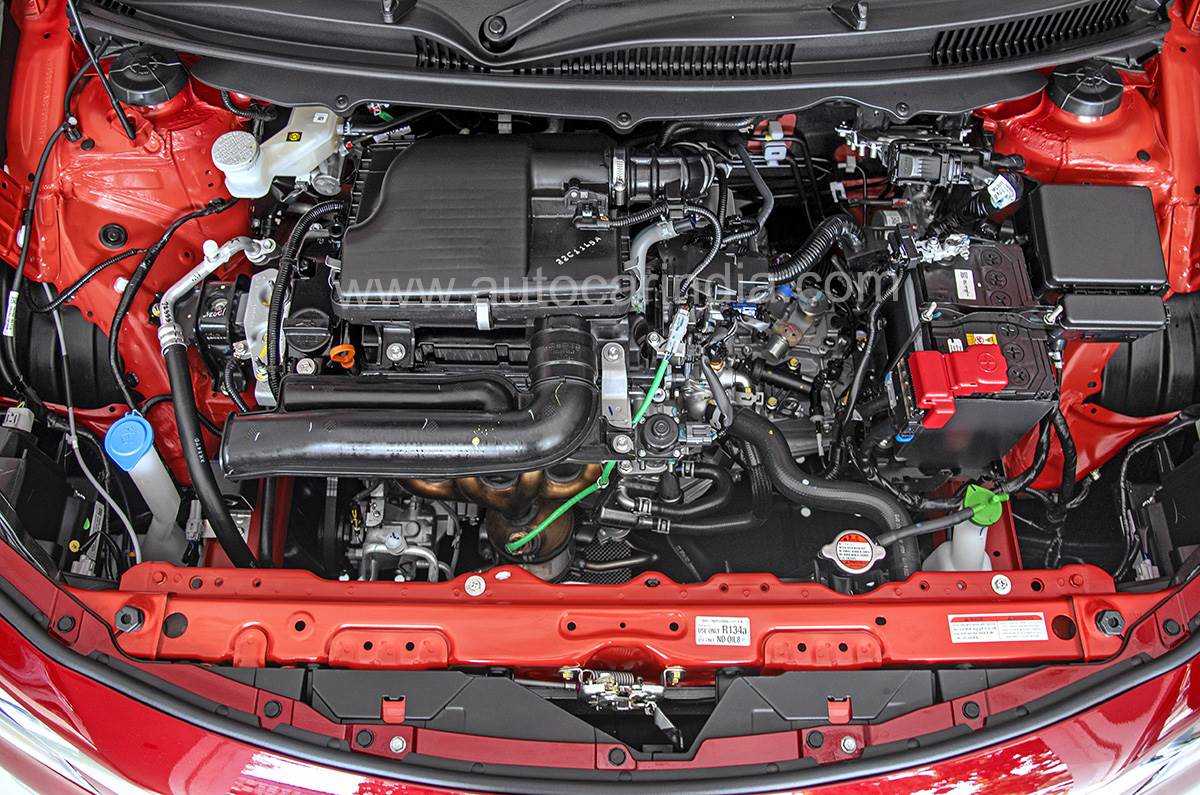 Under the bonnet, there are no surprises. The Glanza gets Suzuki’s K12N petrol engine which is a 90hp, 113Nm, 1.2-litre, four-cylinder unit, paired to either a 5-speed manual or a 5-speed AMT – the latter being a first for Toyota in India. Both versions score really well on economy and there’s no diesel engine on offer. You can read our review of the 2022 Baleno to get an idea of what the Glanza would be like to drive.

2022 Toyota Glanza: how does its price compare to the Baleno?

With the generation update, the Glanza also comes with a wider variant list. There’s four trims for the manual and three for the AMT, with the Glanza’s E, S, G and V, corresponding to the Baleno’s Sigma, Delta, Zeta and Alpha trims. Prices for the Glanza start at Rs 6.39 lakh (ex-showroom, India) for the base E manual version and tops off at Rs 9.69 lakh for the V AMT. 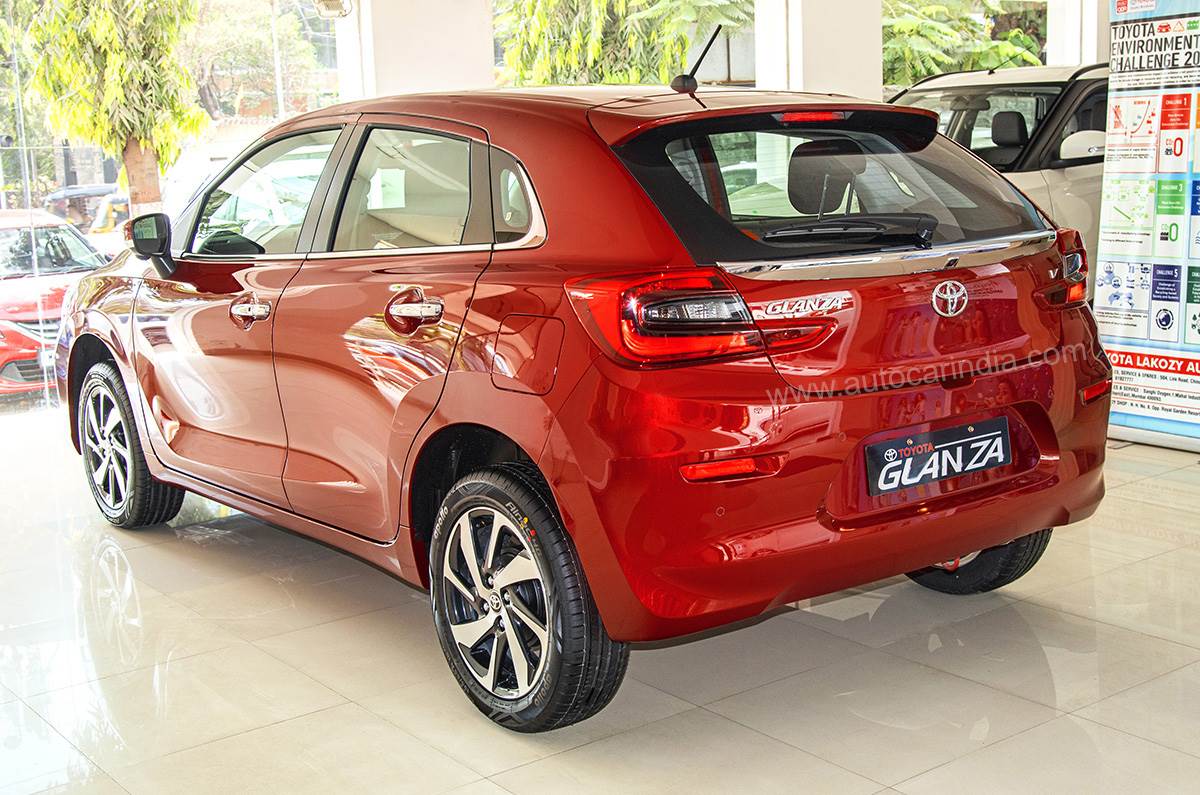 Now,  coming to the matter of which one to pick between the Glanza and Baleno. Let’s leave aside the matter of looks and talk other differences. As introductory prices go, the Glanza is between Rs 4,000-Rs 20,000 pricier than a comparable Baleno variant. On the other hand, the Glanza does go one up with its three years/1,00,000km standard warranty as against the Baleno that comes with a standard two year/40,000km warranty. Buyers with lots of running will also be drawn to the Glanza’s more generous extended warranty with a five year/2,20,000km program on offer for about Rs 20,000-24,000. Depending on the variant, you can enhance the Baleno’s warranty to five years or 1,00,000km for Rs 11,000-16,000.

Maruti Suzuki does have way more touch points across India and you are genuinely never too far from a Maruti Suzuki service station. Toyota, meanwhile, has another take to the convenience angle with express service offerings that include periodic maintenance in 60 minutes.

But, more than anything else, what could be the deciding factor for many buyers are the waiting periods. The Baleno, which just crossed the 50,000 bookings mark, already has a waiting period of four-eight weeks. Certain variants of the Glanza are in stock and dealers we spoke to informed us that the maximum waiting period at the moment is four weeks.