The carmaker originally revealed prices for the Defender 90 last year; available with a choice of 2.0-litre and 3.0-litre engines; deliveries yet to begin. 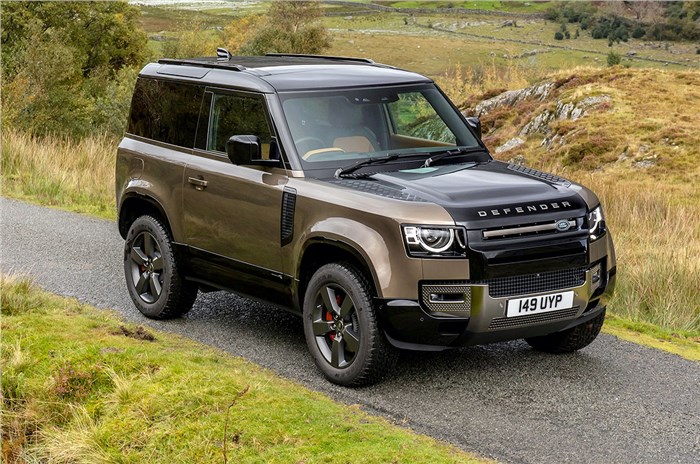 Jaguar Land Rover has announced that the new Land Rover Defender 90 is now on sale in India. Prices for the luxury SUV start at Rs 76.57 lakh (ex-showroom, India) for the Base 2.0-litre petrol and go up till Rs 1.12 crore for the 3.0-litre diesel Defender X.

The short-wheelbase, three-door version of the reborn Defender, the Defender 90, measures in at 4,583mm in length and has a wheelbase of 2,587mm – down about 435mm in length and wheelbase compared to the 110. Unlike the 110, which features three rows of seats, the 90 can be had as a 5-seater as standard, with a front jump seat also available as an option.

The Defender 90 is available in three derivatives – standard, X-Dynamic and Defender X. The difference between the standard Defender and X-Dynamic is mainly down to the cosmetics, while the range-topping Defender X not only gets cosmetic differences but also comes packed with more off-road focused tech.

The Defender 90 is available with three engine options, with all variants equipped with four-wheel drive. The entry-level unit is a 2.0-litre turbo-petrol developing 300hp and 400Nm of torque. The second is a larger 3.0-litre, six-cylinder turbo-petrol that puts out a stronger 400hp and 550Nm. The third engine option is the sole diesel on offer – a 3.0-litre, six-cylinder unit good for 300hp and 650Nm. An 8-speed automatic gearbox is standard.

The Defender 90 has no direct rivals in the market, but will likely compete with the Jeep Wrangler as a niche 4x4 offering.