India-spec Civic will come with lane-watch camera, a sunroof, a 7.0-inch touchscreen infotainment system, a digital MID and more; to be offered in one fully-loaded variant. 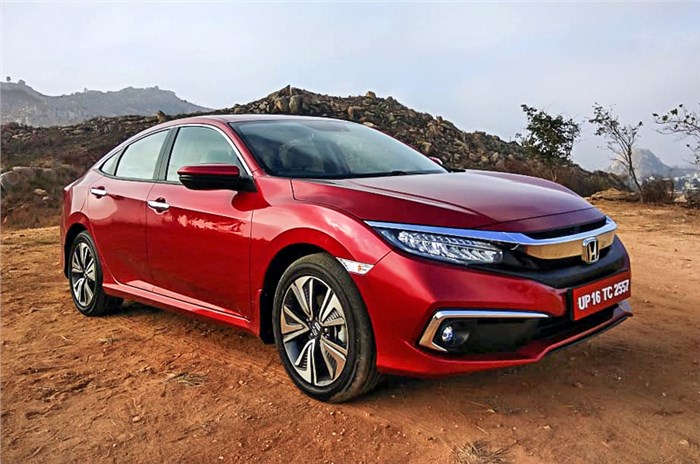 While the all-new, 10th-gen Honda Civic will launch in India in early March, details of the new executive sedan, particularly its features, have been leaked online. The documents show that the 2019 Honda Civic will launch in a single full-loaded variant and two engine-gearbox combinations – a 141hp, 1.8-litre naturally aspirated petrol and a 120hp, 1.6-litre diesel engine.

As we had reported earlier when the new Civic was spotted testing in our country, the exterior of the executive sedan sports LED headlamps, daytime running lamps and tail-lamps. Additional information revealed includes chrome garnish on the fog lamp surround, grill, door handles and the window line; 17-inch alloy wheels in a new design and turn indicators on the front fender.

The inside of the new Civic is a far better place to be than the eight-gen model, which was on sale in India between 2006 and 2012. The cabin features ivory leather upholstery and a dual-tone dashboard and door panels, making it look quite premium. There are chrome touches on the leather wrapped steering wheel – which houses buttons for the infotainment system and cruise control – the centre console and around the front and rear AC vents.

Equipment levels on the new Honda Civic seem to be at par with its rivals. Features like dual-zone climate control, a powered sunroof, a 7.0-inch touchscreen infotainment display (that is Android Auto and Apple CarPlay compatible), an eight-way power adjustable driver’s seat and a smart key (which can be used to turn the engine on and off, operate the sunroof and power windows and open the boot) are standard. Other kit on the new Civic include push-button start, automatic wipers and a fully-digital 7.0-inch MID in the instrument cluster that displays information including access to a connected smartphone’s phone book, call history and music, along with average fuel efficiency and the distance to empty meter. The instrument cluster also has displays for a seat-belt reminder and a door opening alert.

The 2019 Honda Civic’s safety kit is a definite step up from the previous model, with a segment-first lane-keeping assist on offer. Six airbags, ABS with EBD, stability control and Agile Handling Assist (which uses the brakes on individual wheels during cornering), hill-start assist, an electric parking brake with an auto-hold function, a reverse camera, a walk-away auto-lock feature and Isofix child-seat mounts on the rear seats. The model that is on its way to India has earned a five-star rating in ASEAN NCAP’s crash tests.

An interesting point to note is that the lane-watch camera and the digital instrument cluster are shared with the recently launched Honda CR-V.