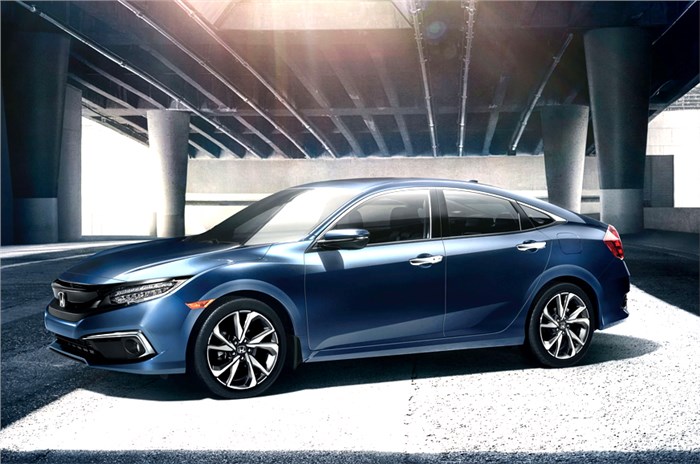 Ever since Honda unveiled it at the 2018 Auto Expo in Delhi and declared it as its third launch for FY18-19, scores of potential sedan buyers have been eagerly awaiting the arrival of the all-new Honda Civic. Marking the return of a nameplate India grew fond of a decade ago, the new Civic comes as a breath of fresh air at a time when the market is dominated by SUVs of all sizes. It’s set to be launched in the first half of March, and now, we’ve got our hands on the new Honda Civic’s fuel efficiency figures.

On the ARAI test cycle, the 2019 Honda Civic petrol returns 16.5kpl, while the Civic diesel returns 26.8kpl. The new Honda Civic petrol will only get a CVT with paddle shifters and three drive modes (Eco, Drive and Sport), while the Civic diesel will only get a 6-speed manual gearbox. The 1.8-litre petrol engine’s figures – 141hp and 174Nm – mean that while it isn’t the most powerful in its class, the Civic petrol can match the best in the segment on the fuel efficiency front.

Among the new Honda Civic’s rivals are the Skoda Octavia, Hyundai Elantra and Toyota Corolla Altis. In petrol-automatic guise, the Octavia (180hp, 250Nm) and Elantra (152hp, 192Nm) are more powerful, but also not as efficient, with the Octavia returning 15.1kpl and the Elantra returning 14.6kpl. The Corolla Altis mirrors the Honda Civic’s power figures (140hp, 173Nm), and unsurprisingly, has a near-identical efficiency figure of 16.7kpl.

What’s more remarkable is the Honda Civic’s fuel efficiency with the diesel engine. Powered by a 1.6-litre ‘Earth Dreams’ turbo-diesel engine making 120hp and 300Nm, the Honda Civic diesel’s fuel efficiency figure is a truly impressive 26.8kpl, which not only makes it more efficient than all its rivals by a significant margin, but also more efficient than the smaller, lighter Honda City diesel, which returns 25.6kpl. This will make the Civic diesel one of the most efficient cars in Honda’s India line-up, not too far behind the Amaze, which returns 27.4kpl.

As for its diesel-manual rivals, the Octavia (143hp, 320Nm) and Elantra (128hp, 260Nm) once again beat the Honda Civic diesel on the power front, but aren’t anywhere near as fuel-efficient. The official figure for the Hyundai Elantra is 22.54kpl, and 21kpl for the Octavia. The Corolla Altis, meanwhile, returns 21.3kpl, and lags behind considerably on the power front, with just 88hp and 205Nm from its 1.4-litre diesel engine.

Think the Civic diesel’s fuel efficiency figure will be a big draw for potential buyers? Would you have liked to see a manual gearbox being offered with the petrol engine, and an automatic option with the diesel engine? Let us know in the comments.