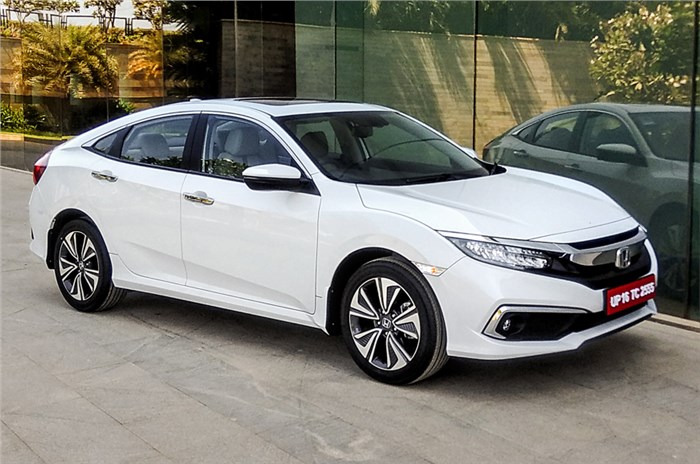 At the 2018 Delhi Auto Expo, the car headlining the Honda stand was the second-generation Amaze. Parked next to it was the latest generation of a sedan that captured the heart of the Indian buyer many, many years back. It was the all-new Civic, making its return to India after a prolonged hiatus. The company had then confirmed the Civic would be one of three new cars it’d launch in the financial year 2018-19, and true to its word, after the Amaze and the new CR-V, the new Honda Civic launch will take place on March 7, 2019. Bookings for the new Honda Civic are now unofficially open, with most dealers accepting Rs 1 lakh as the booking amount.

What we’re getting isn’t the Civic that was displayed at the 2018 Auto Expo, but a facelifted version of it. Changes to the 2019 Civic's exterior are subtle. There's a front ‘wing’ finished in chrome, a reworked, more angular front bumper with chrome accents for the fog lamp housings and a chrome strip for the rear bumper. Rounding off the list of cosmetic updates is a new design for the alloy wheels.

As for equipment levels on the new Honda Civic, features such as dual-zone climate control, a powered sunroof, a 7.0-inch touchscreen infotainment system (with Android Auto and Apple CarPlay compatibility), an eight-way power adjustable driver’s seat and a smart key (which can be used to turn the engine on and off, operate the sunroof and power windows and open the boot) are standard. Also part of the features list are push-button start, automatic wipers and a 7.0-inch digital display for the instrument cluster.

The 2019 Honda Civic’s safety kit is a definite step up from the previous model, with a segment-first lane-watch camera system on offer. Six airbags, ABS with EBD, stability control and Agile Handling Assist (which uses the brakes on individual wheels during cornering), hill-start assist, an electric parking brake with an auto-hold function, a reverse camera, a walk-away auto-lock feature and Isofix child-seat mounts on the rear seats. It’s also worth mentioning that the Civic has earned a five-star rating in the ASEAN NCAP crash tests.

For India, Honda is offering two engine options - a 1.8-litre, 141hp petrol engine, along with the 1.6-litre Earth Dreams diesel engine, making 120hp and 300Nm – the same engine that powers the CR-V.  However, the petrol engine only gets a CVT, while the diesel is only available with a six-speed manual gearbox. Fuel efficiency for the Civic petrol is pegged at 16.5kpl, and an impressive 26.8kpl for the Civic diesel.

The 2019 Honda Civic is expected to be priced between Rs 18-22 lakh, a price point at which it’ll go on to rival the likes of the Skoda Octavia, Toyota Corolla Altis and Hyundai Elantra.

What do you think would be the right price range for the Honda Civic facelift? Let us know in the comments.