While the diesel version of the Tata Nexon is the better of the two, is it good enough to take the fight to the hot-selling Maruti Vitara Brezza? 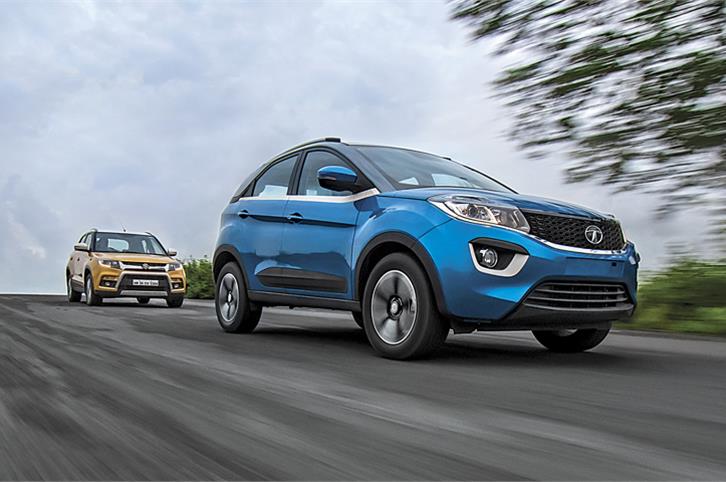 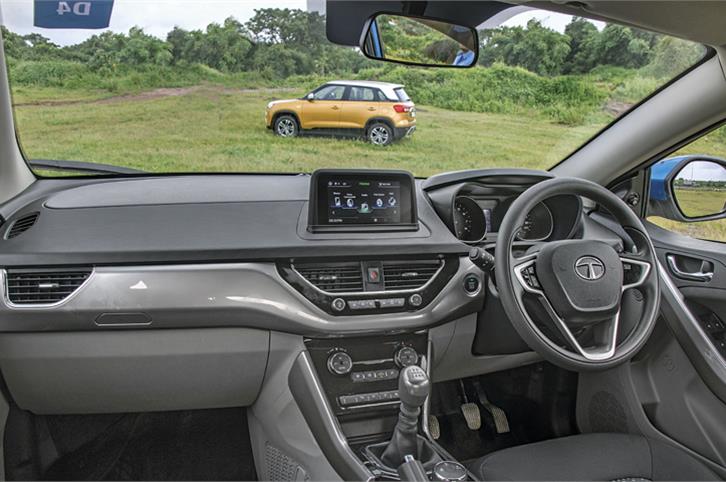 Nexon’s dash looks modern and cabin has a premium air about it. High-set ‘floating’ centre screen is easy to read. 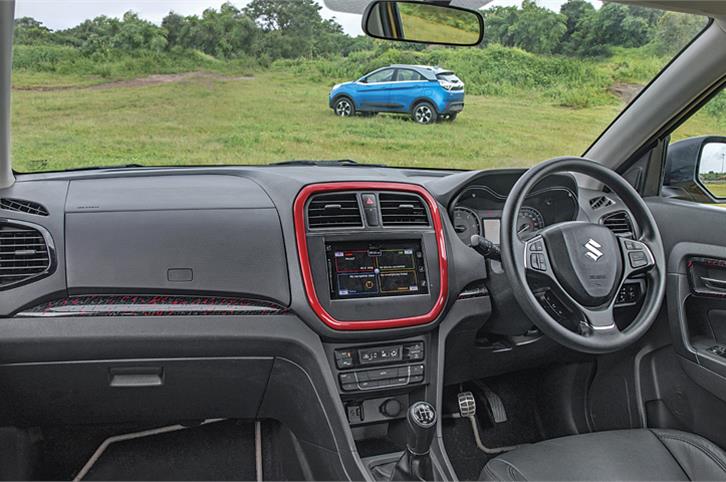 Brezza feels more SUV-like from behind the wheel. Dashboard is neat and functional but lacks flair. 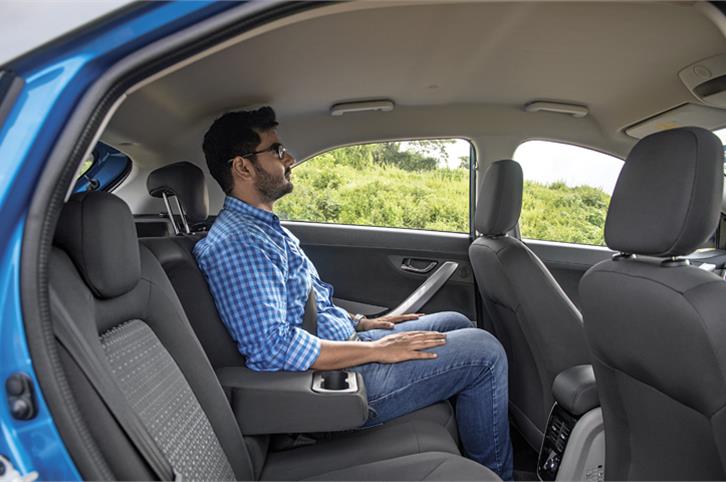 The Nexon has the comfier rear seats.

With its striking looks, powerful diesel engine and the likelihood of an inviting price tag, the Tata Nexon makes for an enticing proposition. But is it the best diesel compact SUV you can buy? The answer lies in how well it fares against the yellow model in the picture above – the Maruti Vitara Brezza. The Brezza has been a remarkable sales success since its launch last year and we found it to be a more complete package than the Ford EcoSport, the original compact SUV wonder, when we brought the two together. Incidentally, we’d have liked to feature the EcoSport as well, but with a comprehensive facelift coming in the next few months,
Ford opted to fight the battle some other day.

So as things stand, the Vitara Brezza is the model to beat. Does the level-headed Brezza hold on to its position or could the Nexon bring about a disruption in the compact SUV segment?

LIVING SPACE
There are no two ways about it – it’s the Nexon that’s the looker here. Its bold design gives it a genuine star appeal that few cars this side of Rs 10 lakh can hope to match. When you step inside too, you’ll like what you see. The dashboard looks modern and the general ambience inside is premium. Other things to like include the comfy front seats, the high position of the centre screen and the fact that the main touch points like the steering wheel and gear lever are nicely finished. What you’ll also appreciate is that each of the doors have a usable bottle holder and that the glovebox is really huge. But the Nexon hasits share of quirks too. For instance, the centre storage bay is too deep and narrow to access comfortably on the go, the USB/aux inputs are hard to reach and the useful umbrella holders in the front doors can hold only slim umbrellas. The thick A-pillars also obstruct visibility at crossroads.

Standing beside the hip Nexon, the Brezza looks decidedly middle-aged. Sure, Maruti offers accessories aplenty to jazz up the appearance, but the Brezza is just styled too simply for its own good. Like the exteriors, its interiors won’t make you go ‘wow’ either. Yes, the dash layout is uncluttered but the design lacks flair. However, a key difference between the Nexon and the Brezza is that the latter gives a greater feeling of being in an SUV. Its more upright A-pillars, larger glass area and generally better view out help give that impression. The Brezza also has an edge in practicality, with dual gloveboxes, a larger centre storage bay and more space for items such as your mobile phone and wallet. But for all its practicality, the Maruti also has fewer feel-good bits. You’ll also find more hard and scratchy plastics in the Brezza’s cabin than you would in the Nexon, though, it’s the Maruti that boasts the more consistent panel fit.

Rear-seat passengers are well catered to in both models but there are some clear differences here as well. While the rear section of the Brezza’s cabin feels airier and offers more width to seat three, thigh support is average and the middle-seat backrest can prove to be a bit firm. In contrast, you sit lower on the Nexon’s rear seats and don’t get as good a view out. But the way the outer seats are contoured makes them really comfy; even a middle passenger will find the comfort better here, despite lesser shoulder room. The Nexon also offers marginally more kneeroom in the back.

Both SUVs come with 60:40 split-and-fold rear seats, though only the Brezza’s sit flush with the boot floor when folded. Also, while the Nexon has the larger boot on paper (350 litres vs 328 litres), the Brezza’s is better shaped and also a little bit easier to load luggage into.

FEATURE PERFECT
The SUVs offer quite a bit in terms of equipment. Top-spec versions of both models get dual airbags, ABS, steering-mounted buttons, auto climate control, rear-view camera, and Bluetooth audio streaming and telephone functions. Like the Brezza, the Nexon also gets keyless go but with the cool addition of an Activity Key, which is a wristband that doubles up as a key, doing away with the need to carry the physical fob. The Nexon also goes one up on the Brezza with its rear air con vents and dynamic guidelines for its reversing camera. The Brezza, meanwhile, is unique here for offering cruise control, and auto wipers and headlights. Both models do boast touchscreen infotainment systems. But it’s the Brezza’s larger 7.0-inch touchscreen that is slicker than the Nexon’s 6.5-inch unit that functions with a bit of lag. At present, the Brezza offers Apple CarPlay and the Nexon comes with Android Auto, but the models will offer both projection standards in the coming months. Where the Nexon trumps the Brezza is in sound quality. Its eight-speaker setup delivers solid punch.

MOVING ON
Do a brochure-to-brochure comparison of what these SUVs offer in the engine department and you’ll find it’s the Nexon with the larger, more powerful and torquier engine. The Nexon’s 1.5-litre diesel engine makes 110hp at 3,750rpm and 260Nm of torque at 1,500-2,750rpm. The Brezza’s 1.3 on the other hand, produces 90hp at 4,000rpm and 200Nm at 1,750rpm. The Nexon also uses a six-speed gearbox, while the Brezza makes do with a five-speeder. Oh, and the Tata also gets three drive modes that alter the engine’s characteristics.

If you spend most of your time behind the wheel in city traffic, you’ll like the Nexon, so long as you keep it in City or Sport drive modes. The engine offers great drivability and pulls cleanly from as low as 1,000rpm. What’s also nice is engine noise levels remain low throughout. On the Nexon, there’s no sudden rush of power but it’s easy to mistake the linearity for lack of poke. Look beyond the 0-100kph time and you’ll note it’s actually the calm and composed Nexon that is quicker through the gears. But when you are in the flow of things, you’ll miss the mid-range punch that you get in other turbo-diesels, Brezza included. The Nexon does make for a relaxed cruiser though, with the sixth gear doing its bit to keep revs (and noise levels) low.

In contrast to the Nexon’s engine that gives its best in the bottom end, the Brezza’s unit feels most alive in the latter half of its rev range. There’s a very distinct step up in power at 2,000rpm, after which the Brezza’s diesel pulls with gusto to 5,000rpm and beyond. In fact, in its powerband, the Maruti can become fairly exciting to drive. Extend the engine, though, and you will also be forced to contend with its loud and industrial note. What also marks the Brezza’s engine down is its performance in town. Under 2,000rpm, it feels lethargic and you’ll have to work the gearbox (shifts require a bit of a push) to get the revs back up. The mediocre bottom-end just takes away from the whole experience.

THE RIDE STUFF
On the suspension torture tests that are Mumbai’s roads, the Nexon surprised us with how well it managed to soften the blow of the happenings beneath. It handles broken roads really well, with minimal shock entering the cabin. The impressive wheel travel and 209mm of ground clearance also came handy when the going got really tough. While the Brezza’s 198mm of ground clearance doesn’t limit it in any way, we did find ride quality to be noticeably firmer on the same stretches of road. Low-speed ride is relatively jiggly and the suspension makes more noise too.

Drivers will also like the Nexon’s steering better as it works with a lovely fluidity and weighs up in a predictable manner. The Nexon diesel feels sure-footed at high speeds, and even body roll in corners is never to the point of being disconcerting. You can carry higher cornering speeds in the Brezza (it remains flatter at high speeds) and turn-in is quick. Enthusiasts, however, won’t like the slack at the steering in dead centre position.

AND THE ANSWER MY FRIEND
There’s a reason why the Vitara Brezza has sold as much as it has. The Maruti name issynonymous with reliability, great fuel efficiency and a stress-free ownership experience, and the Brezza offered all of the above in a shape buyers wanted. On top of that, it is spacious, practical and well equipped. Unfortunately, the Brezza is lacking in emotion and the outdated diesel engine is hard to overlook.

The sexy Nexon might not be the model to worry the Brezza’s position at the top of the sales charts, or give you the same peace of mind as a Maruti would, but all said and done, it is the better product. Sure, it lacks a bit in finesse and does trail the Brezza in some areas, but with its nicer engine, better ride and ample feel-good bits, it backs up its unquestionable desirability with some solid virtues. The Tata also has the advantage of keener pricing. The top-spec Nexon Revotorq XZ+ costs Rs 9.45 lakh(ex-showroom, Delhi) which makes it more affordable than the Vitara Brezza ZDI+ that is priced at Rs 9.69 lakh (9.91 lakh for the dual tone roof version).  In all, it is the Nexon that appeals to both heart and head, and is the one we’d pick.