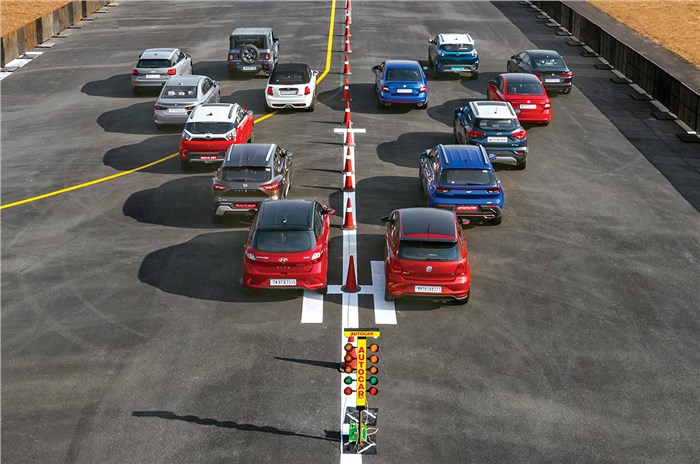 In this edition of Autocar India’s quarter-mile racing series, we line up some exciting head-to-head contests. We take you through the races. 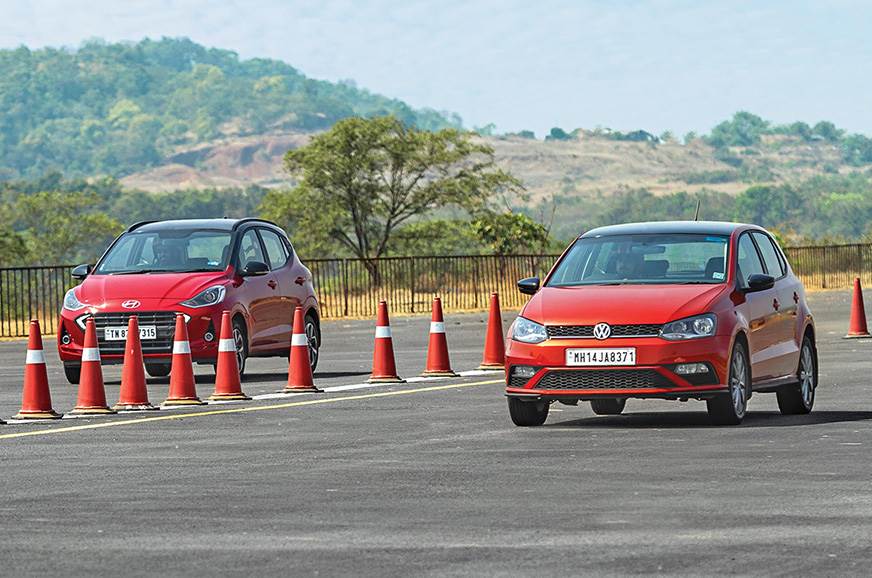 Small turbo-petrol hatchbacks with manual gearboxes are a recipe for fun. And the two cars we have here have clocked sub-10sec 0-100kph timings. But the way these put down their performance is a lot different, as demonstrated during these races. The Polo TSI puts down its power a lot more cleanly and performs best when launched around 2,500rpm with controlled wheelspin. And once its turbo starts singing, it pulls forward in an energetic manner. The Nios requires a lot more skill to extract the best out of it, due to a rather sticky clutch, which causes a bit of a delay between shifts, and its skinny 175mm tyres that struggle for grip, thus losing precious time in the drag race. At the end, the 110hp Polo was victorious, with its best run being 16.367sec for the quarter-mile, while the 100hp Nios Turbo’s best was 17.1sec after multiple attempts. Click here to watch the video. 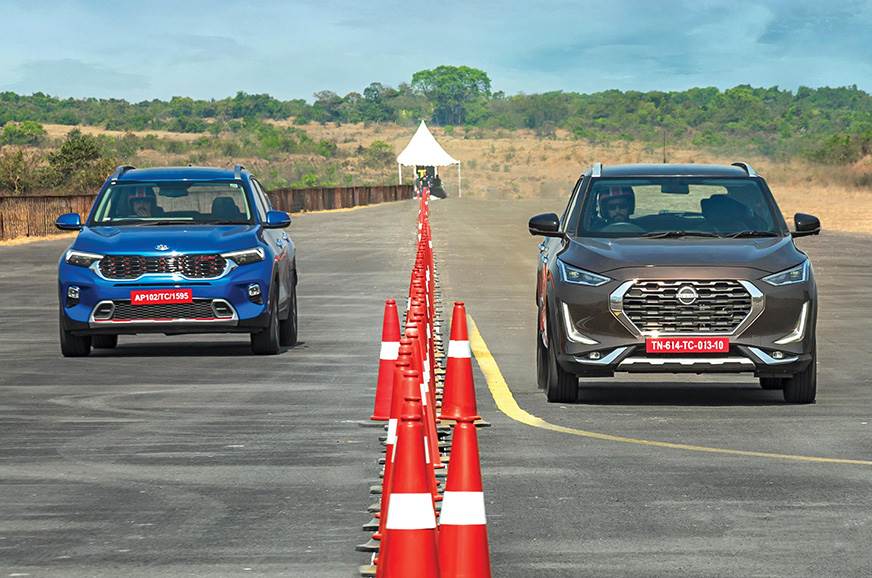 Automatic compact SUVs are certainly very convenient but which is the quickest type of transmission – CVT or a DCT? We pit the Nissan Magnite CVT and Kia Sonet DCT against each other to find out. Both are turbo-petrols, and they have clocked similar times in our tests. What’s also similar between them is that neither can be launched aggressively. The Magnite leaps off-the-line due to a more responsive transmission, and paired to its strong engine, it maintains its lead all throughout the race. The Sonet’s DCT in comparison isn’t nearly as responsive, and there’s a momentary pause before it gets going. With 20hp more than the Nissan and a new-age dual-clutch transmission, the Sonet did seem to have the upper hand on paper, however, the Magnite recorded the quicker quarter-mile time. Clickhere to watch the video. 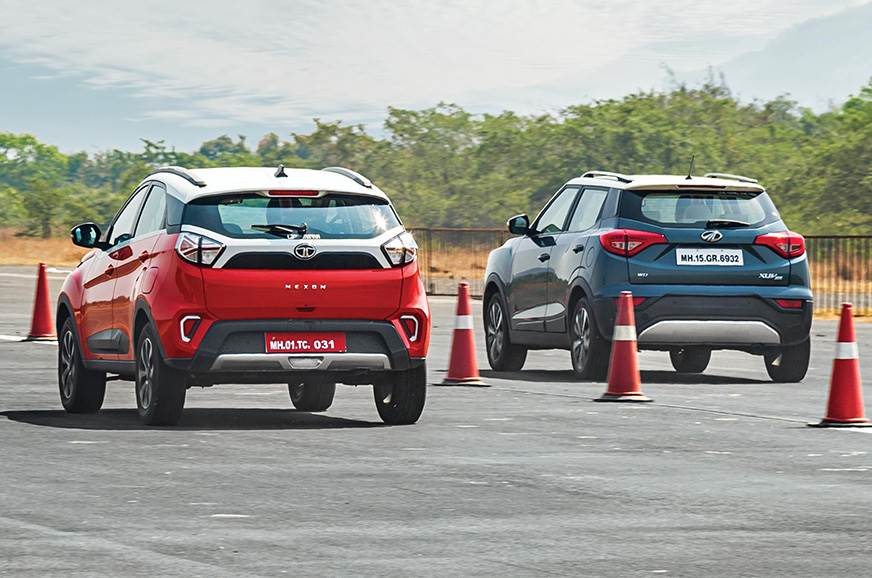 If there was an online popularity contest, these two would have probably shared the win. And there’s a lot that’s common between them – they use 1.5-litre diesel engines, they both get 6-speed manual transmissions and they’ve performed exceptionally well in crash tests, not that we were going to test that last bit. Another similarity is just how tricky these are to launch, and they both tend to bog down despite hard launch attempts. The real surprise, however, was that, once on the move, there’s very little to tell them apart as their performance is evenly matched and both accelerate impressively through the gears. The race was so close that the XUV300 clipped the finish line just 0.181sec before the Nexon. At the end though, the famous line from the movie The Fast and The Furious sums up this race really nicely – “it doesn’t matter if you win by an inch or a mile, winning is winning.”Click here to watch the video. 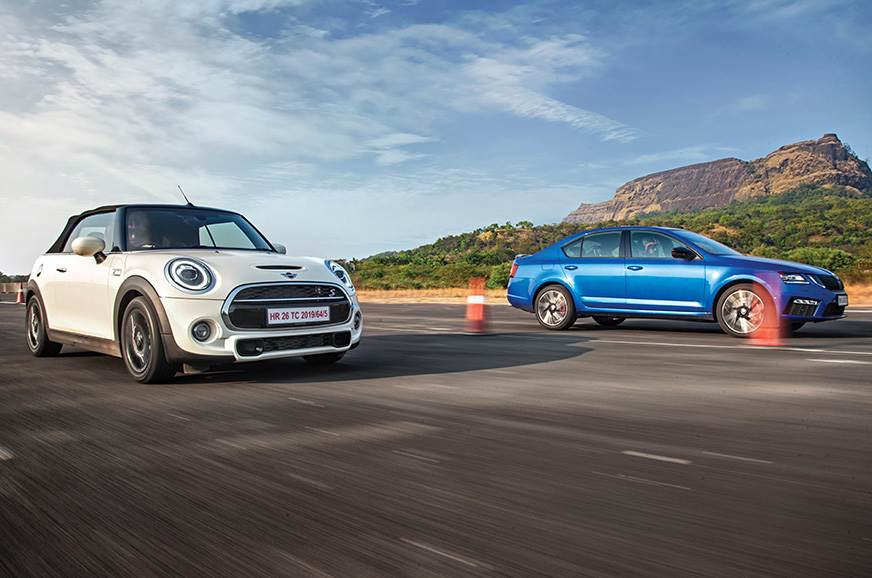 Here are two of the sportiest front-wheel-drive cars available in the market. In the white corner is the 192hp Mini Cooper S Convertible and in the blue corner there’s the elusive Skoda Octavia RS245, which as its name suggests makes 245hp. Both cars have launch control systems, however, the Mini scampers into the lead on account of a slicker launch and its weight advantage. It also holds its ground till around 100kph, after which the RS strong-arms the little convertible hatchback with its horsepower advantage and dominates this race from thereon. Clickhere to watch the video. 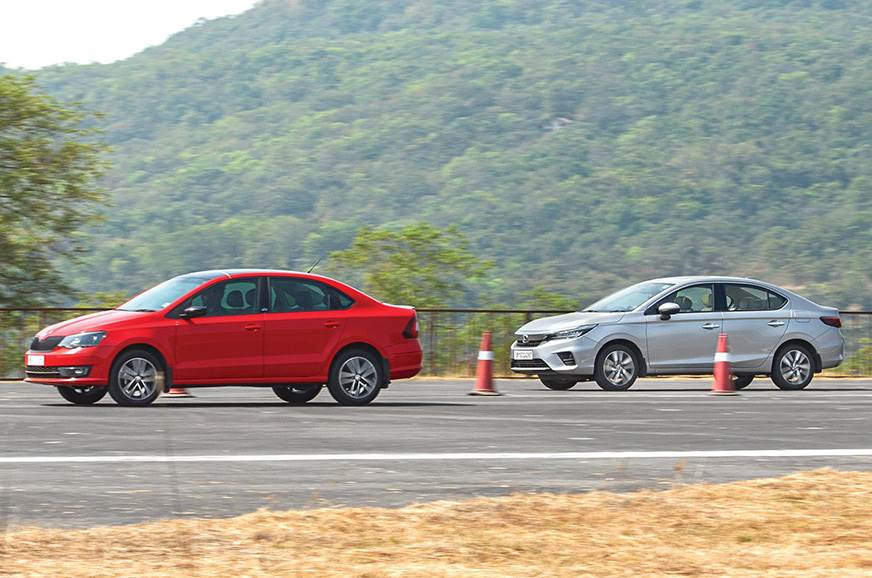 Which one’s better – a larger, naturally aspirated petrol engine or a smaller-capacity turbo-petrol unit? To find out, we pit two midsize sedans, the Honda City and the Skoda Rapid TSI against each other. Both cars have 6-speed manual gearboxes and have clocked a whisker over 10 seconds in our 0-100kph tests. The difference on the drag strip, however, was a lot more exaggerated than the numbers speak. Even though both cars get off the line with equal gusto, the TSI starts pulling ahead, owing to its higher torque output, and continues to widen the gap till it crosses the finish line. And even though the extremely rev-happy VTEC is an absolute gem of an engine that loves to be spun till 7,000rpm, it simply doesn’t have enough grunt to keep pace with the Skoda. At the end of the race, boasting of a 0.403sec lead, the smaller capacity turbo-petrol is the one that’s victorious. Clickhere to watch the video.

A Tale Of Two Citys 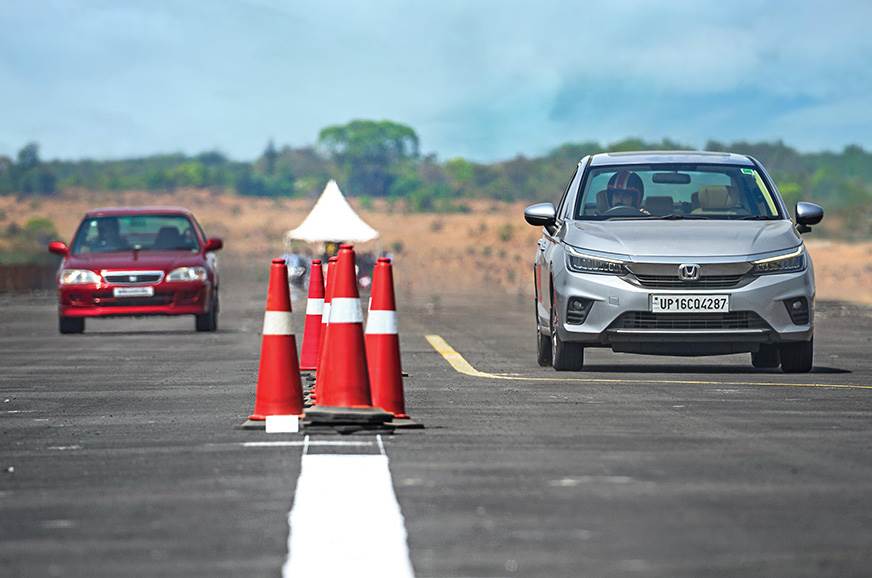 Around 23 years ago, the Honda City made its debut in India, and almost immediately built quite a reputation among driving enthusiasts, who swear by Honda’s high-revving naturally aspirated VTEC petrol engine till date. But just how much of a step-up is today’s City, compared to the first-generation model? We get our hands on a 21-year-old City VTEC, which developed 107hp back in the days. Despite its age, it launched in an energetic manner, and the engine spun all the way to its redline just as freely as it did back then. The new car though is thoroughly modern, makes 121hp and has six gears to play with, and it puts down its power a lot more cleanly, so it wasn’t a surprise that it won. But what is surprising is that the old City ended up being merely a second slower than the new one, which is a commendable feat in itself. Clickhere to watch the video. 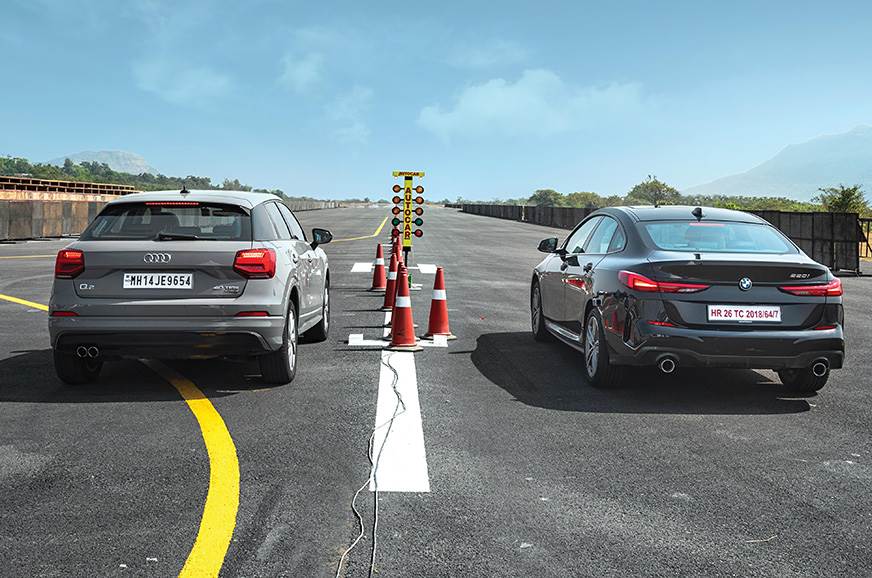 These are two unique offerings in the entry-level luxury space – one’s a sedan, the other is a compact SUV. Both use 190hp, 2.0-litre turbo-petrol engines. The front-wheel-drive BMW has launch control, but the Q2’s brilliant quattro all-wheel drive helps the Audi put down its power better and take the lead. The 220i does reel the Audi in closer to the finish line due to its stronger top-end performance, but the Q2 clinches the win with a quarter-mile time of 14.951sec, versus the 220i’s 15.211sec. 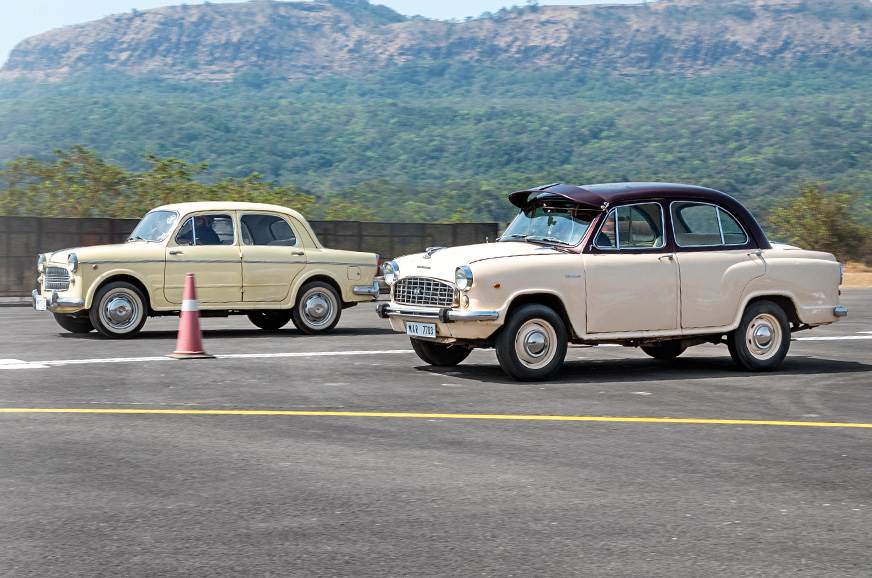 Just for fun, we put the two Indian stalwarts against each other on a drag strip to add another dimension to a debate that’s ongoing amongst Indian petrolheads for decades now – Fiat or Ambassador. The Fiat 1100 in question uses a 40-year-old rally-prepped engine, with a high-lift cam, larger pistons and a high compression head. The MK4 Ambassador, on the other hand, is in pristine, factory condition. Their respective owners were behind the wheel with their foots welded to the floor, equally determined to clinch the win. While the lightweight Fiat 1100 bagged the lead, it was the Ambassador with its power and displacement advantage that eventually crossed the finish line first. Clocking times of over 24 seconds, these two are by far the slowest cars we have had at the Autocar Drag Day, but seeing these compete on the 402m drag strip was truly a sight to behold. Clickhere to watch the video.

Talk Of The Town 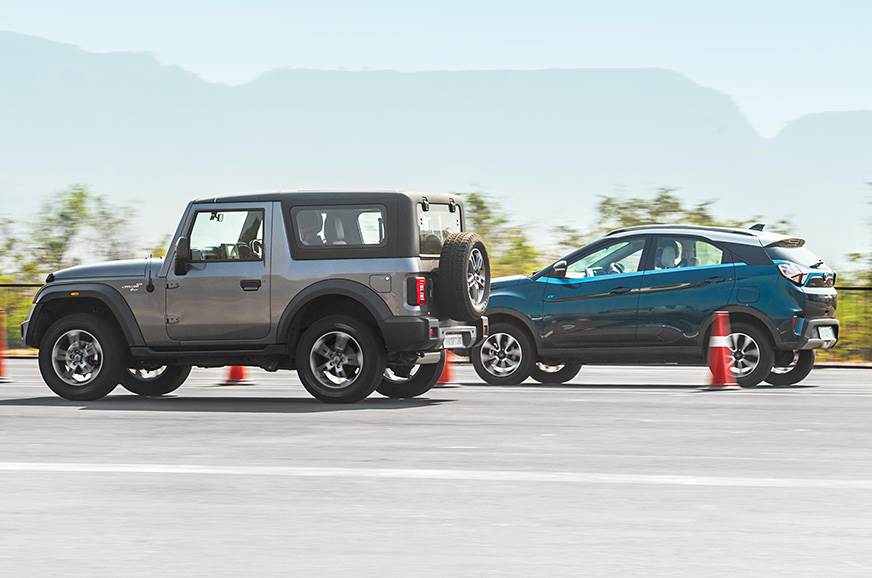 Quite literally, the only common factor between these two is their price. One’s a gas-guzzling four-wheel-drive off-roader, and the other is a green, all-electric family car. It’s common knowledge that electric cars generate max torque right from the get-go, so one would imagine that the Nexon EV would be quicker off the line, but the Thar surprised us. This petrol-automatic off-roader hurled itself into the lead as a result of the sheer volume of fuel being dumped into its cylinders under full throttle. With its strong performance, the Mahindra maintained its lead till around the halfway mark, after which the Nexon EV whizzed passed in silence. The EV’s continuous delivery of max torque across the board and its more aerodynamic shape led to its victory. This is a race that no one asked for, but ended up being one of the most exciting races of the event. Click here to watch the video.