The Mercedes-powered VJM11 will evolve considerably over the next month. 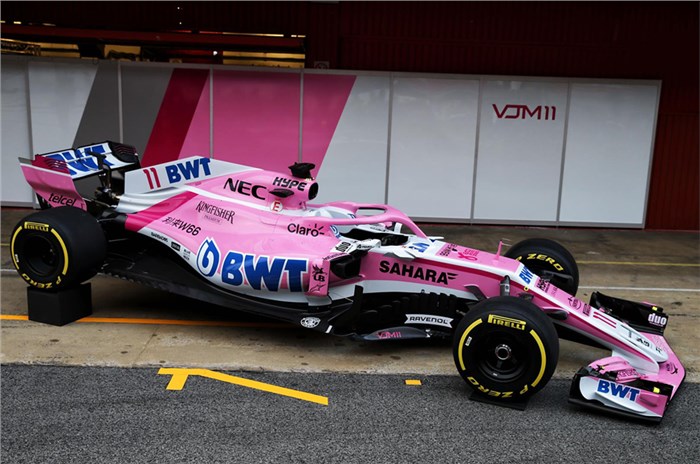 Force India revealed its 2018 Formula 1 contender ahead of the first pre-season test at Barcelona. Like its predecessor, the new VJM11 has a pink livery in deference to sponsor BWT - although there is now more white on the nosecone, engine cover, rear wing and around the cockpit.

Development driver Nikita Mazepin will be at the wheel for the Mercedes-powered car's first run. Race drivers Esteban Ocon and Sergio Perez will then take turns in the car later in the week. Reserve driver Nicholas Latifi was due to drive as well but tweeted on Monday morning that he "a serious infection put me in hospital last week and I'm now recovering at home".

The shape of the VJM11 will evolve considerably over the next month, with Technical Director Andrew Green explaining: “The DNA of the car is still very much that of last year’s car. We took the decision, quite a while ago, that the launch specification of the 2018 car would be based around our understanding of the 2017 car, but with all new structures required by the regulations in place. It is a starting point, a good reference from which to introduce changes quite quickly; it gives our aerodynamics department more time to develop a car for the first race in Australia, rather than having to release parts early for testing.”

Ocon and Perez will then have two days apiece in the car for the second test, which begins on March 6, 2018.

Force India has finished fourth in the constructors' championship for the last two seasons. The team has insisted that it is not considering any offers to sell the team following recent speculation linking it with an energy drinks company.