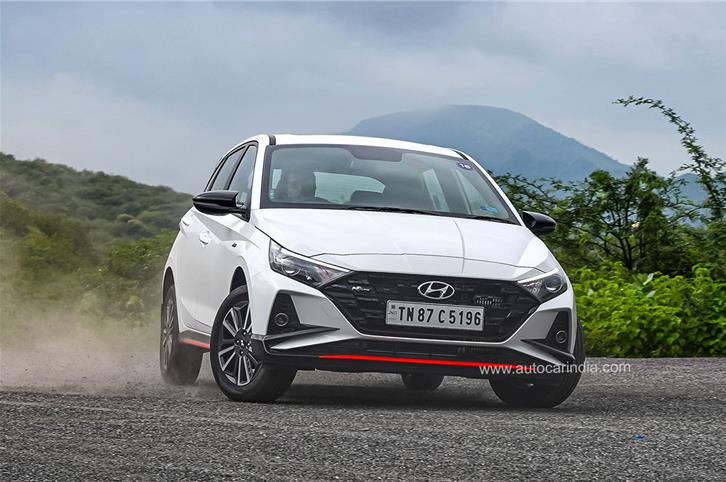 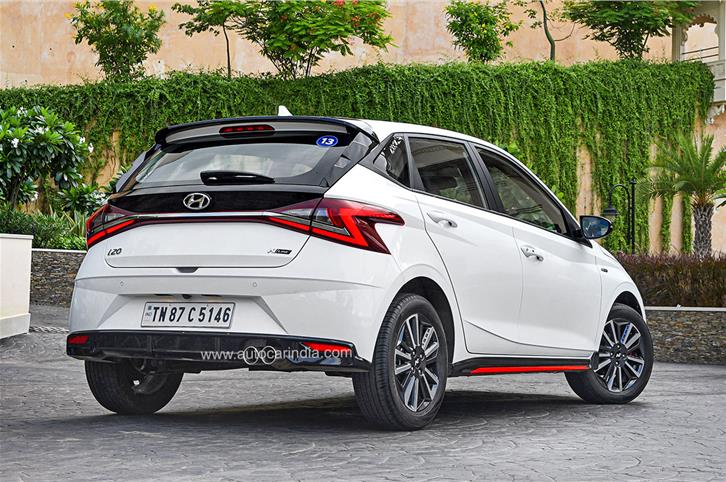 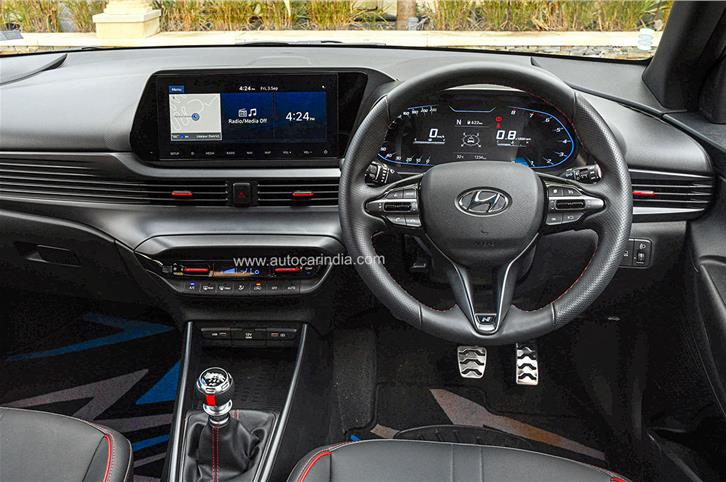 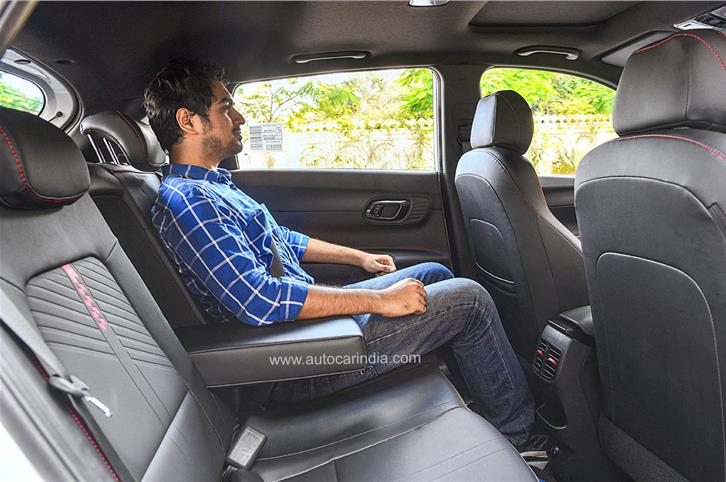 The i20 Turbo now gets the company’s sporty N Line treatment, does that make it more exciting?

The i20’s 1.0-litre direct injection turbo-petrol motor offers a nice sporty driving option for those who seek it and now with the N line, Hyundai wants to take the excitement up a notch. The i20 N Line also signals the beginning of Hyundai’s N performance division in India and we will soon see more N Line models with the possibility of full-blown N performance cars coming in the future.

So, what does ‘N’ represent? The N division, established in 2019, is Hyundai’s performance brand akin to M by BMW and AMG by Mercedes. The company says the letter ‘N’ stands for Namyang, the company’s headquarters in South Korea where the car is designed and for Nurburgring, the race track where Hyundai develops and fine tunes these models.

Under the N umbrella Hyundai has full-blown N cars, which have bigger powertrains, fully redone suspension systems and other race enhancements for virtually every area like the steering, gearbox, brakes and differential. The N Line – which is what we have – are models that mainly come fitted with sporty styling enhancements, along with some light performance upgrades to areas like the brakes and suspension.

The i20 N Line has a markup of Rs 50,000-1,00,000 over comparable variants of the i20 and shares the standard cars 120hp, 1.0-litre turbo-petrol engine, as well as the seven-speed dual-clutch automatic transmission (DCT) and the six-speed intelligent manual transmission (iMT). It is priced between Rs 9.84-11.75 lakh (ex-showroom).

What is the i20 N Line like to drive?

Let’s get straight to the heart of the matter. Besides the obvious go faster styling bits, the i20 N Line features three crucial mechanical upgrades over the standard i20, and the good news is that these do enhance its sportiness. The first among these upgrades are its dampers, which are thirty percent stiffer than the standard car’s and enable the N Line to tackle corners in a flatter, more athletic manner and reduce body roll. What’s nice is that the stiffness does not take out a lot from the comfort and the ride does not feel overtly stiff while dealing with bad roads and potholes. The car’s highway manners are much nicer too, and it feels even more sure-footed at high speeds. 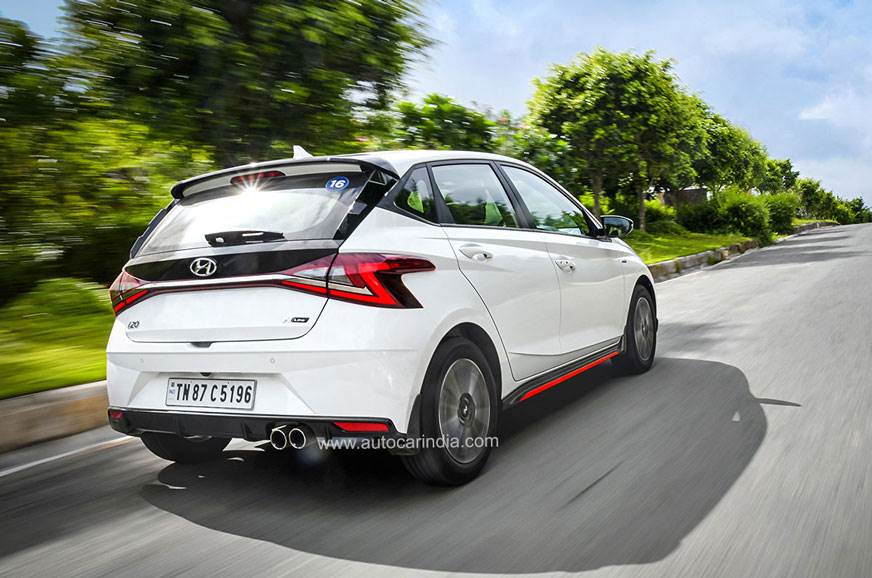 The second change is its steering feel, which is a lot heavier than the regular car. The on-centre feel is nicer and the vagueness from the i20’s steering has been eliminated. The added weight certainly ups its engagement levels by making it a lot sharper to point, thus infusing a greater degree of driver confidence.

The third area of enhancement is the addition of rear disc brakes. Not that the regular version’s brakes were lacking, but having discs at all four corners feels more reassuring. On the whole, all these enhancements made to the already capable chassis of the standard i20, have improved its driving dynamics making the i20 N Line a genuine driver’s delight and one of the nicest driving hatchbacks around. 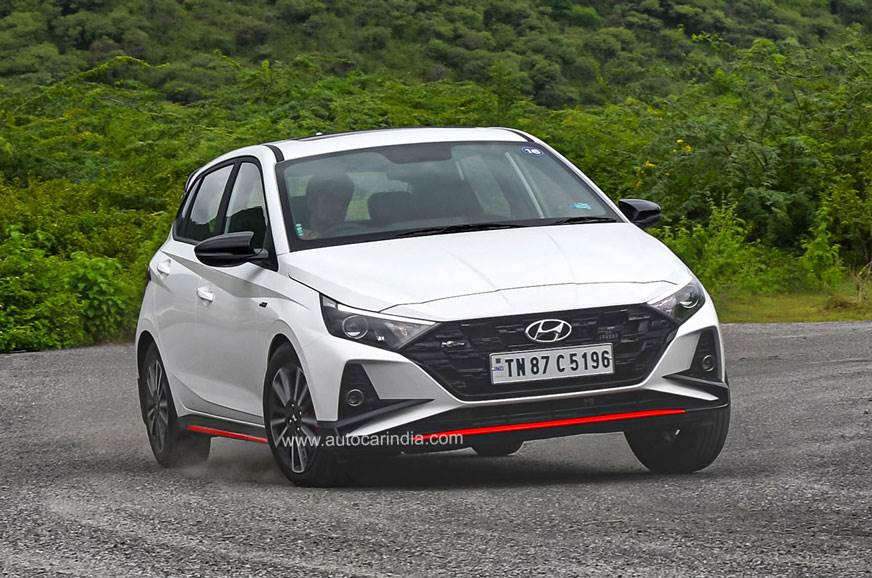 So good is the N Line’s driving prowess, that it eggs you to drive harder and try to extract more from the motor. The turbo-petrol engine is carried over from the regular car, unchanged, and while in standard guise it does the job quite well, in the N Line, it feels like it could have some more power, due to the capable N Line chassis. And where this motor lets you down is in its delayed power delivery below 2,000rpm, which can get annoying at low speeds, leading to sluggish off-the-line responses.

The rest however is fine as the engine retains its healthy mid-range performance and is rev-happy. So it will effortlessly spin past 6,000rpm. And when you drive with a heavy foot, the new twin-tipped muffler emits a raspy note, particularly on the outside.

Paired to this motor is the same 7-speed dual-clutch transmission (DCT) and six-speed iMT (semi-automated manual transmission) from the regular car and we really feel Hyundai missed the opportunity to offer a proper manual.

The DCT is smooth in its operation, and comes across as a well-sorted gearbox in most scenarios. Straight-line performance is strong and Hyundai claims a 0-100kph time of 9.90 seconds, identical to the standard version, as the N Line’s 10kg weight gain over the standard car is negligible.

If you’ve experienced the erstwhile Volkswagen Polo GT’s dual-clutch automatic transmission, you would feel that the Hyundai’s feels slower in comparison, especially while taking manual control via paddleshifters. There’s a Sport mode that holds gears a bit longer than ‘D’, but on a winding uphill climb, you can get caught between its short second and tall third gear ratio. Because of its widely-spaced (lower) gear ratios, it often loses steam and breaks momentum; and in such scenarios its weak off-boost performance is further amplified. 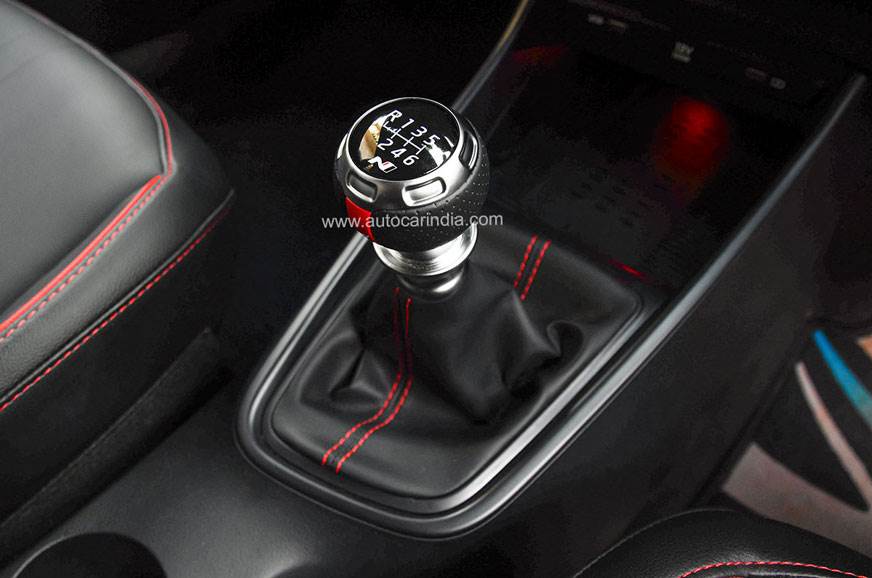 Shifting focus to the iMT, this six-speeder gets a proper manual shifter minus a clutch pedal. This smooth-slotting transmission is a convenient compromise for those seeking freedom from a clutch pedal in crawling traffic, while still wanting to row through gears manually. What’s nice is that the engine feels more responsive with the iMT and because of the better-spaced gear ratios and the fact that you can hold onto gears, it is a lot more enjoyable on winding hilly roads. For all its merits, however, the iMT isn’t a transmission that’ll allow quick shifts, and because it lacks a clutch, it doesn’t allow for exhilarating off-the-line launches. But between the two, this is definitely a better option. Expect 0-100kph sprint times in the region of 11 seconds for both, DCT and iMT, similar to what we achieved in our tests with the regular car.

What are the other N Line specific changes?

As for the exterior, the i20 N Line gets ample enhancements. The front bumper gets minor tweaks which look a bit more aggressive and its chin, finished in red, looks distinctive, as does the subtle red strip on the sideskirts. On the car with the Fiery Red paint shade, silver highlights replace the red treatment. Other changes include a new all-black front grille which sports an interesting chequered flag-inspired design. Spicing up its side profile are black mirror housings, new diamond-cut 16-inch alloys and red front brake calipers. The rear gets a new bumper, twin muffler tips, as well as a roof spoiler with side wings finished in black. And just to ensure you don’t mistake it for the standard i20, Hyundai has slapped ‘N Line’ badges on the front grille, side fenders and tailgate. 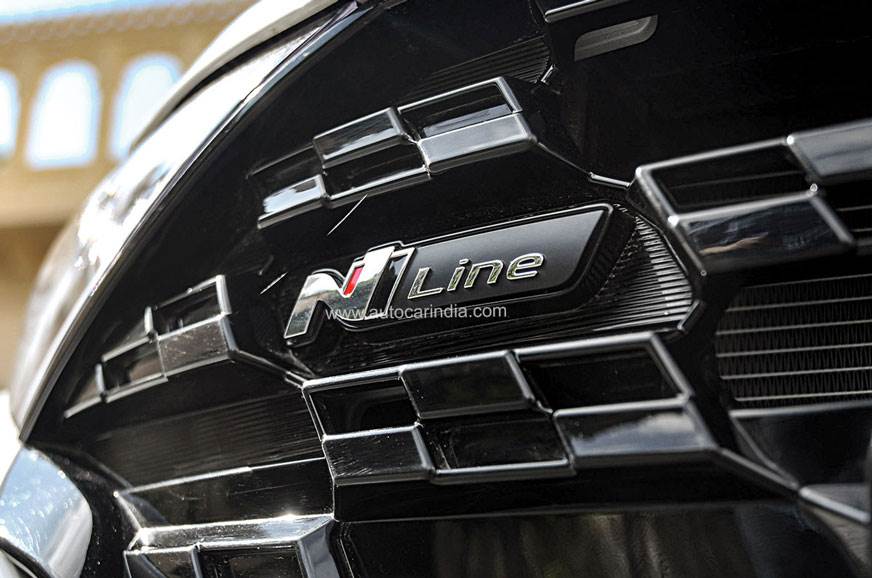 On the inside there are a few low-rent plastics but the N Line tweaks do uplift the cabin. It features splashes of red, irrespective of the body shade. The seats feature a very sporty red piping and the ‘N Line’ branding, as does the new steering which feels superb to grip. Then there are some red highlights on the air vents, door handles and gear lever. Speaking of which, the iMT’s shift lever is so good, it will easily pass muster in a much more expensive sportscar. Continuing the red theme on the inside are new red ambient lights too. On the whole, the seats are comfortable and space, storage and practicality are aplenty, 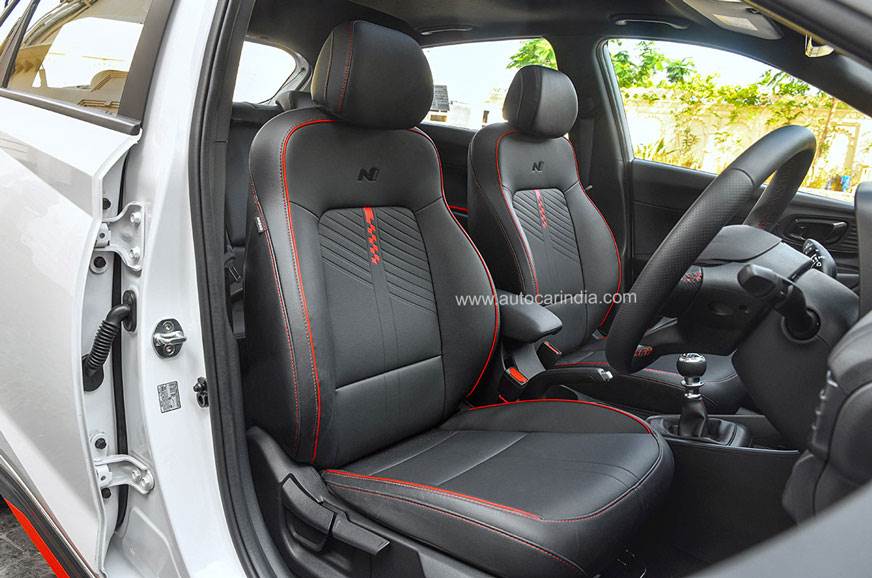 Is the N Line better equipped than the regular i20?

What really grabs headlines is the base N6 iMT variant which is extremely well equipped and priced competitively at 9.84 lakh ex-showroom. This variant easily justifies the Rs 1 lakh premium over the Sportz variant i20 turbo iMT. The N6 gets you a lot; including the body kit, diamond-cut alloys, front and rear disc brakes, ESP and a sunroof. Interestingly, even though this variant gets a smaller 8-inch touchscreen (compared to the 10-inch unit in the top-spec N8 variant), this new-generation unit gets wireless Android Auto and Apple CarPlay while the top-spec gets a wired connectivity. 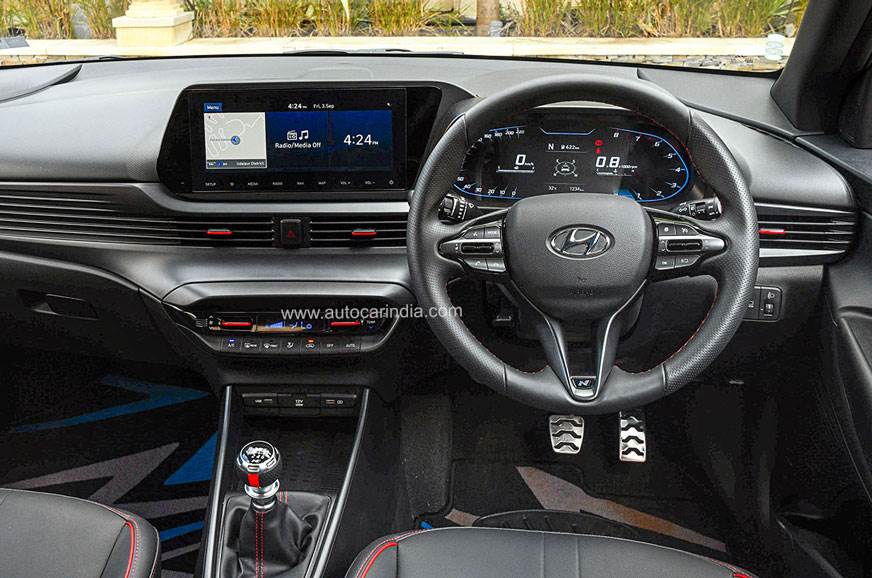 The top-spec N8 variant is loaded to the gills with 6 airbags, Bose audio system, LED headlamps and a lot more. It also gets new connectivity features via the Bluelink smartphone app taking the count to 58. Among other functions, it features voice command to operate the sunroof and driver’s side window, as well as over-the-air map updates (16 updates in 8 years). The N8 variant priced at Rs 50,000 more for the DCT and Rs 95,000 for the iMT than the Asta O variant of the regular car, isn’t as good value as the N6 variant in terms of features, due to fewer additions over comparable i20 variants. 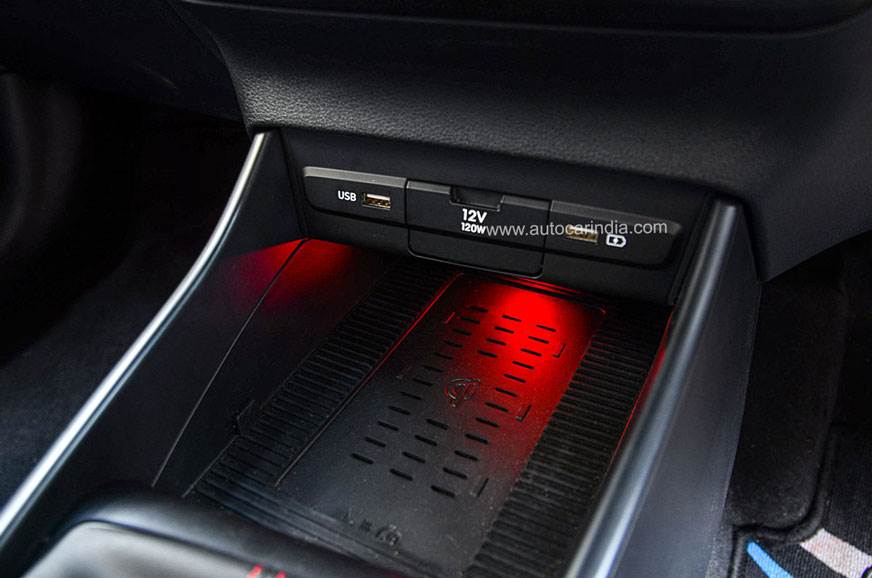 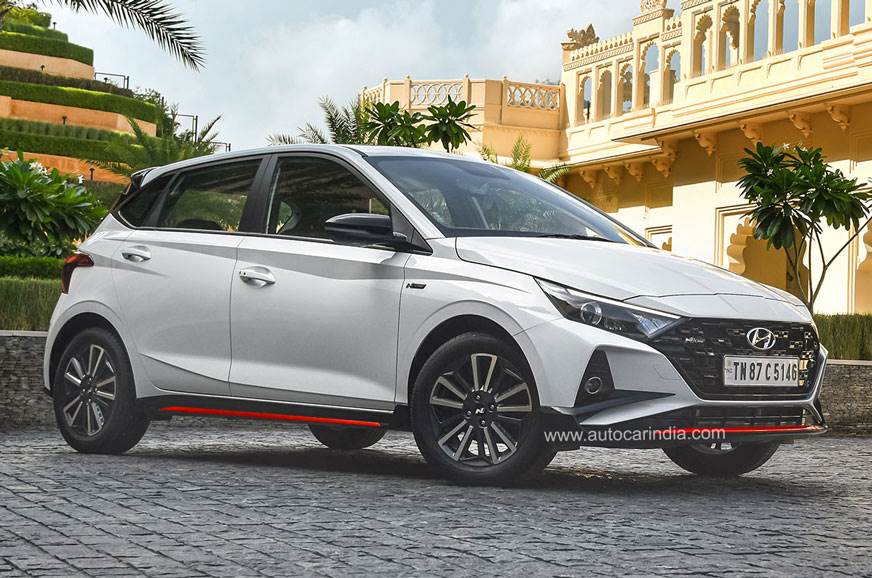 While the i20 is expensive to begin with, the good news is that the step-up for the N Line is only marginal and is an honest attempt to transform a regular hatchback, into an exciting sporty proposition. Sure, a three-pedal manual gearbox setup would have added a greater degree of driver engagement, and the engine’s performance should have been enhanced to match its dynamic ability, which is one of the best around. But the small cosmetic and mechanical tweaks have upped this hatchback’s desirability and sportiness several notches. And with a racy persona complementing the i20’s strengths like a spacious interior and class-leading features, what you get is a very appealing package. One that can satisfy both driving enthusiasts and family hatchback shoppers alike.