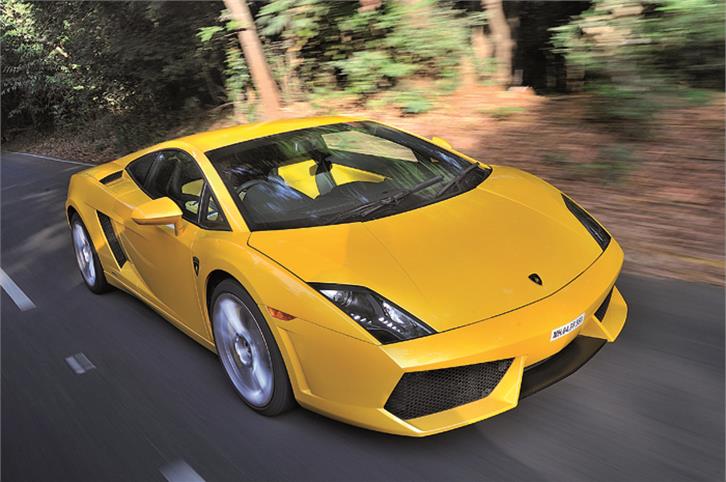 The 550-2 is the first series production rear-wheel-drive Lambo since the Diablo SV, so maybe there's a bit of that old devil in there. 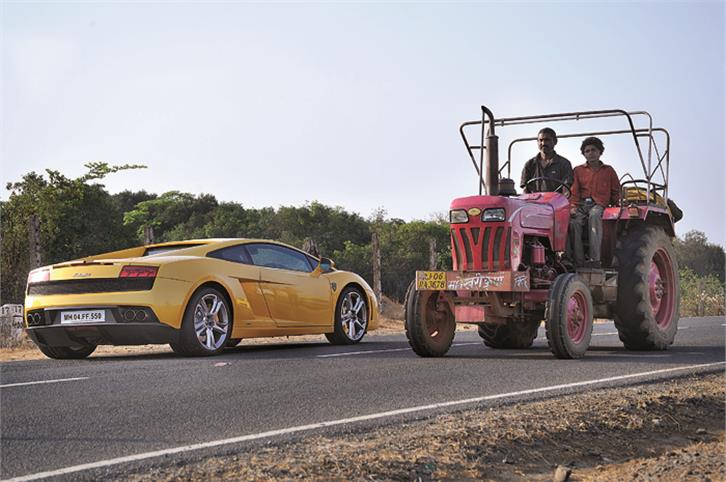 It may not have the same ground clearence, but the Gallarad 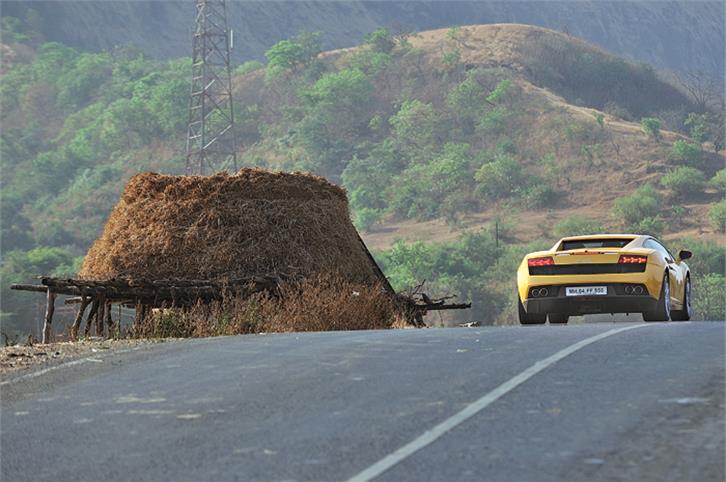 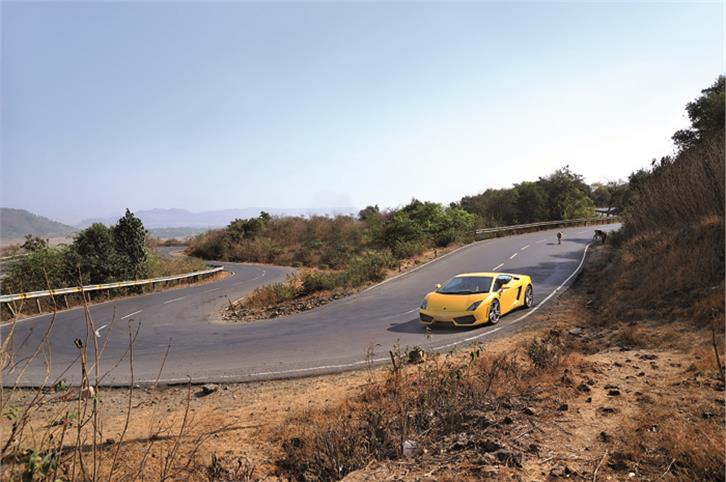 Is the rear-wheel-drive Lamborghini Gallardo LP550- as nice as its all-wheel-drive sibling? We go to Lonavala to find out.

Of course you can use a Lamborghini Gallardo in India.  All you need to do is find a stretch of tarmac 4.1sec long – that’s all the time it takes for this LP 550-2 to bully its way to 100kph. 200kph? It’s a mere 8.4sec more. Sure, hitting its 320kph top speed might be a bit more of a challenge, but then again, it’s not top speed that’s important here. What’s important is that there is 542bhp in a car that weighs the same as a Renault Fluence. It means each one of the V10’s horses has to move just 2.5kg. It means an extraordinary day ahead at the wheel of a bright yellow switchblade.

So here I am, sitting about two inches off dry, grippy tarmac, steeply raked windscreen ahead, legs uncomfortably offset to the left to reach the pedals, and looking at the spaghetti strand of road that leads to Aamby Valley City near Lonavala, Maharashtra.

There are no fancy buttons to wake the V10, just an ex-Audi key to twist, and with that action comes a brief burst of high-frequency starter wail, the engine catches with a naughty thrrrrump of revs, and then settles to an even idle.

Pull the right paddle and give it some throttle – the Gallardo seems inappropriately meek at first. With the six-speed, single-clutch e-gear transmission in Auto, it feels no more an animal than a hopped-up Audi, except that you’re sitting low enough to see the underside of an Audi. The engine is quiet, the gears shift smoothly and the V10 is buttery smooth.

It’s a good thing we picked a weekday to come here. Lonavala on a weekend is like the Kumbh Mela at full volume. Helmet-less bikers, Taveras loaded with loaded people, the waterfall dancing brigade, they’re all there. Today though, there’s not a soul, and we have 24km of pristine tarmac to tear up and down on. The road is narrow, and it still is public thoroughfare, so we will have to exercise restraint.

Ha! That’s like asking Metallica to tone it down. With a V10 growling away inches behind your spine, an exhaust note that sounds as full bodied as Sophia Loren, restraint is the last thing you will exercise. And that’s because at 4000rpm, the until-now-subdued exhaust note hardens and gives you your morning hit of adrenaline as the 5.2-litre direct-injection V10 tears to its 8200rpm rev limiter in first. It gets there so quick, you need to be on high alert not to run it against that limiter. Tug the right paddle for second. There’s a deliberate pause and that robotised clutch thumps back in with all the gentleness of The Hulk patting you on the back.

The thing is, this hill road doesn’t have straights long enough to allow you more than a bit of third gear. But even this is enough to get a feel of the ferocity of the V10. For starters, you don’t want to get too brave in a Gallardo the first time out. So its corner, downshift, turn in, feed the brute with a bit more throttle than the last corner, feel around, push a bit harder through each turn and see what happens as you approach the limits of its Pirelli P-Zeros.

This Gallardo is the first series-production rear-wheel-drive Lamborghini since the Diablo SV, so maybe there is a bit of that old devil in here. We have to find out.

But the steering feels curiously inert around the straight-ahead position, and it only wakes up when you really push it hard. It is nowhere as sharp or as quick as say, a Ferrari 458, and that’s a disappointment. Still, there’s plenty of grip from the fat 295/30 R19 rear tyres and when you enter a corner too hot, understeer sets in. Gently lifting off the throttle will tuck it back in line.

Push harder and it becomes obvious that the LP 550-2 is not as foolproof as the regular all-wheel-drive LP560-4, but neither is it a complete handful. There’s good front-end bite and clear communication through the steering of the grip available. And when you deliberately give it a bootful (with the ESP off) the rear breaks away progressively and with nice balance. So, if you happen to drive the Aamby Valley road one of these days and notice perfect black parabolic lines through the first section of road, you know exactly where they came from.

Photo shoot done and Pirellis scrubbed, it’s time to head back to the expressway and on towards Vashi, Navi Mumbai, where a flatbed truck awaits to take it back home.

We’re lucky here as well – there’s not too much traffic today and the expressway’s expanse is a better setting to let the Lambo’s 542 horses and 55kgm of torque run riot.

Actually, riot isn’t the correct word – it simply doesn’t do enough justice to what really happens. The first two gears are short and chosen for brutal acceleration. Not brutal in an Aventador sort of way obviously, but plenty enough to give your passenger a mild stroke.

It’s in third gear that the rush ◊ ∆ gets truly terrifying because the engine stays in its wide powerband (all the way from around 3500rpm to 8200rpm) providing sustained, truly startling thrust, manic top end and all. It’s the kind of car that will sneak past 220kph if you don’t pay attention and ease up to 250kph without batting an eyelid.

And then we get to the Bhatan tunnel. As a place to exercise the baby Lambo’s 10-cylinder throat, not much comes close. So we slow down, drop the windows, downshift to first, run through
the gears and emerge into daylight in what must have sounded like Pavarotti to the lone, cowering Wagon R we passed.

We’re almost at the outskirts of Panvel now and there are two issues that need mentioning – the first is with the brakes. They feel spongy – there’s no bite initially as the pedal travels through some free play. And then they bite, suddenly, making them hard to modulate. Once past this initial nothingness though, stopping power is tremendous and you do get used to it after some time. The other issue is with the stiff spring rates. When you’re really going for it, the car gets kicked around quite a bit so you can never relax. In fact, it almost feels like it’s alive and telling you not to take it for granted.

It is when we exit the expressway that I discover another side to the Gallardo. It feels compact and surprisingly easy to manage among jostling taxis – the wide rear view mirrors and the rear window give you a reasonably clear view of who’s chasing you with a camera phone. It doesn’t feel intimidating and is rather easy to drive in tight traffic too. If only the ride wasn’t so firm – the lumpy tarmac on the highway leading to Vashi really tosses you around.

Which brings us to its ground clearance – it isn’t as bad as it looks. The front suspension has a raise function that lifts the car’s nose to clear speedbreakers and bad roads, and the short wheelbase helps too. We didn’t scrape the bottom, not even on the massive speed bumps that lie just before the Vashi creek bridge.

What’s also surprising is how well-built and solid this Gallardo feels, right from the thunk you get when you shut the conventional doors. The interiors are really high quality, and this is not surprising when you notice how much Audi there is in here. The air-con console is a straight lift, as is the audio system. This isn’t an entirely bad thing simply because it makes the cabin an easy to use, allowing you to get on with driving, rather than worrying about where a switch is and if it will work.

And, despite its yellow paint and sharp looks, the Gallardo didn’t attract half as much attention as the Aventador. Sure, necks whip around and bikers tend to overtake you looking backwards, but we never got mobbed the way we did in the bigger Lambo. This may be because the Gallardo has been around in some form or the other for almost ten years. In my opinion, this diminished attention is a good thing simply because you don’t have to fight your way out of traffic lights and parking spots.

The estimated post-budget price of the Gallardo LP 550-2 is Rs 2.4 Crore (ex-showroom, Delhi), which is Rs 15 lakh cheaper than the LP 560-4. Should you pick one over its four-wheel drive sibling? Well, the 560-4 feels more planted and offers extraordinary all-weather traction, and you can see the sense in that, given the state of our roads and our unpredictable weather.

What this rear-wheel-drive car offersis a combination of more feelsome controls, better balance and greater exhilaration and that makes it extra special. Also, it may not be as precise or refined a weapon as its direct rival from Ferrari, but what the LP 550-2 lacks in ultimate accuracy, it makes up for by serving up spades of old-school thrill. And it is Rs 70 lakh cheaper than the Ferrari.