Volkswagen Virtus production commences ahead of May launch

The new VW midsize sedan will come with either a 1.0-litre or a 1.5-litre turbo-petrol engine; to be manufactured at VW’s Chakan facility in Pune. 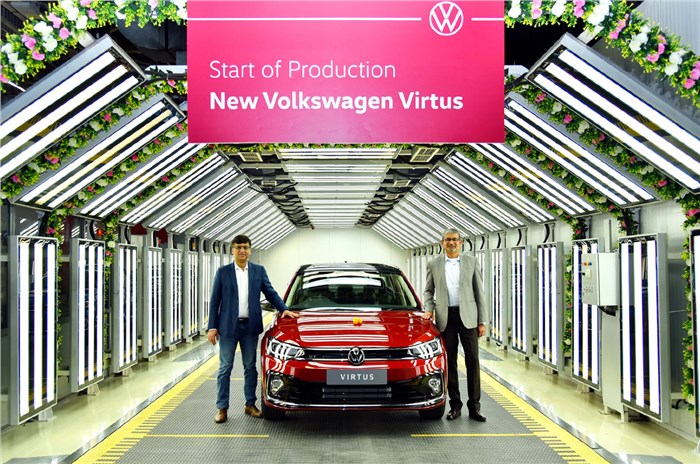 Volkswagen India has announced that it has started production of the upcoming Virtus sedan at its Chakan plant in Maharashtra. The midsize sedan will go on sale in India in May.

The Virtus will be available with two engine options and will rival other midsize sedans like the Maruti Ciaz.

The Virtus is based on the same MQB A0 IN platform as the Skoda Slavia. Like its Skoda sibling, as well as the Taigun, the Virtus will come with two turbo-petrol engine options – the 1.0-litre, three-cylinder TSI unit that makes 115hp and 175Nm and the 1.5-litre, four cylinder TSI unit that develops 150hp and 250Nm.

There will be two gearbox options available on the 1.0 TSI variant – a 6-speed manual and a 6-speed torque converter automatic. The 1.5 TSI will only come with a 7-speed DCT gearbox.

Fully-kitted Virtus will get a 10-inch touchscreen infotainment system, an 8.0-inch digital instrument cluster, wireless phone charging, connected car tech, ventilated front seats, a sunroof, ambient lighting, a cooled glovebox, and auto headlamps and wipers. On the safety front, higher variants of the car will get a tyre pressure monitor, six airbags, ESC and hill-hold control. The GT variant will get red detailing on the dashboard, red stitching, and aluminium pedals for a sporty appeal.

Volkswagen started accepting bookings for the Virtus on March 8, with its launch slated for sometime in May 2022. Once launched, it will compete with its sibling, the Skoda Slavia, as well as other midsize sedans like the Honda City, Hyundai Verna and Maruti Ciaz.