The filter can reportedly neutralise viruses (including the SARS-CoV family) and bacteria. 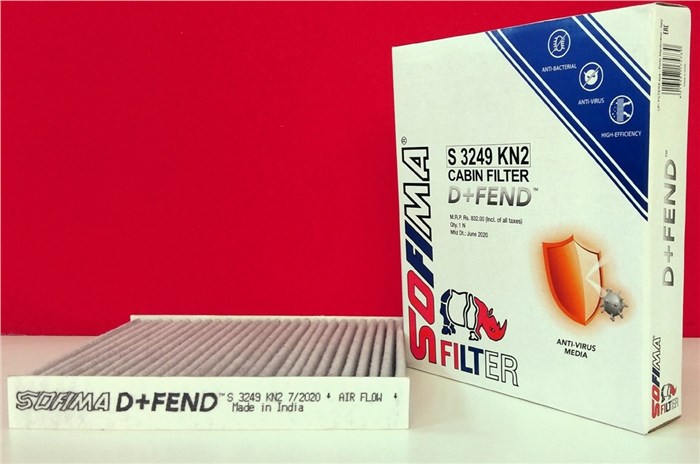 UFI Filters, an Italian automotive component manufacturer, has launched an anti-virus cabin air filter for popular passenger vehicle models in India under the ‘Sofima D+fend’ brand. The product is said to be effective in neutralising bacteria as well as viruses, including the SARS-CoV-2 virus which has wreaked havoc in the past few months. The product has been launched at a time when the need for personal mobility and sanitisation has been increasingly gaining prominence.

How does the Sofima D+fend anti-virus cabin air filter work?

The bespoke filter is essentially meant to replace the original cabin air filter that is a part of the vehicle’s HVAC (heating, ventilation and air conditioning) system and as such, doesn’t require any special fitments. The filter is composed of fibres coated with silver and copper ions. The company states that “while copper ions destroy the cell barrier of viruses and bacteria, silver ions penetrate the nucleus, neutralising them outright.”

The component maker reports that the specialised filter has managed a “kill rate of 99.5 percent” for viruses from the SARS-CoV family as well as influenza A, H1N1, H3N2 and H7N9 in laboratory tests. A “kill rate of 99.9 percent” has been achieved for bacteria such as E.coli in lab conditions. Furthermore, UFI’s new filter is said to have a filtration efficiency of more than 95 percent for aerosol particles, with dimensions equal to 0.3 microns (a micron is a millionth of a metre, for reference). However, with the product having recently hit the market, real world efficacy still remains to be seen.

Which car models is it available for?

The Sofima D+fend filter has been introduced for 21 popular models of passenger vehicles in India including the Maruti Suzuki Swift, Dzire, Vitara Brezza, Ciaz, Mahindra XUV500, Toyota Innova, Fortuner, Honda Amaze, Ford EcoSport, Renault Duster and more. Responding to a media query during the launch event, the company’s management stated that the list of eligible vehicles will grow to 50 models by the year’s end.

For now, UFI has launched the product as an aftermarket add-on to cater to a large number of existing car owners, but the company’s top brass has said that it is also in talks with leading automakers for the specialised cabin filter to serve as original equipment in their vehicles at some point.

How much does it cost?

The D+fend filter is being manufactured at the company’s plant in Bahadurgarh, Haryana. Owing to local production, the company has stated that the product is expected to cost a premium of just 25 percent over a vehicle’s original cabin filter. Prospective buyers will be interested to know that the anti-virus filter is available through the company’s 119 dealerships across India.