A mild refresh of the hatchback and sedan sees the addition of a larger 7.0-inch touchscreen and more equipment; prices bumped up by Rs 10,000-30,000. 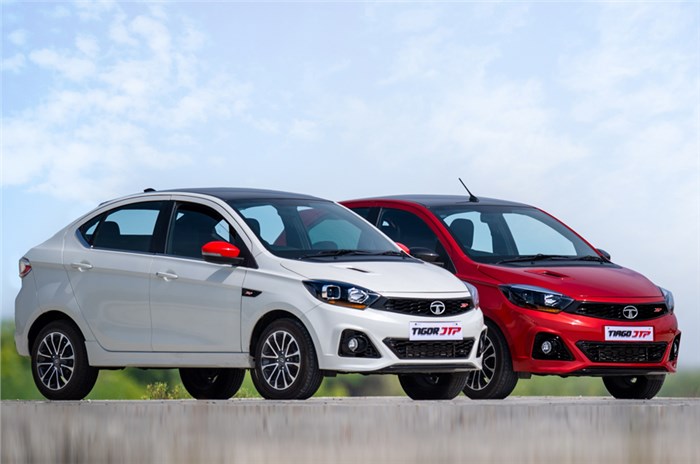 Tata Motors has introduced a mild update to the Tiago and Tigor JTP twins, with the performance hatch and sedan now priced at Rs 6.69 lakh and Rs 7.59 lakh (ex-showroom, Delhi), respectively. This marks an increase of Rs 30,000 for the hot hatch and Rs 10,000 for the Tigor JTP in the asking rates; they had made their market debuts in October last year. The refresh sees the addition of some much needed equipment that was given a miss on the original models.

To start off, the hotter Tiago and Tigor do away with the earlier 5.0-inch infotainment display in favour of a larger 7.0-inch touchscreen unit with Apple CarPlay and Android Auto. Additionally, the electrically adjustable wing mirrors get a convenient power folding function. The Tigor JTP’s automatic climate control feature can now be found on its hatchback sibling too.

Both models, which were previously equipped with only a driver seat-belt reminder, also gain a co-driver seat-belt warning and a high-speed alert system. In terms of equipment levels then, the JTP duo now matches the top-spec versions of the standard Tiago and Tigor.

Except these modifications, the sporty hatchback and sedan continue unaltered, though the latter does now get a shark fin antenna finished in black. Projector headlamps, side skirts, a roof-mounted spoiler, diamond cut alloy wheels, contrast paint shade and custom seat upholstery remain part of the standard kit. Safety is taken care of by essentials such as dual airbags, ABS, EBD and rear parking sensors.

There are no mechanical changes under the hood. The souped-up versions of the regular Tiago and Tigor continue to be powered by the same 1.2-litre, three-cylinder turbocharged petrol engine capable of churning out 114hp and 150Nm of peak torque. Transmission duties are handled by a 5-speed manual gearbox.

While the JTP twins aren’t exactly hot-selling models, the recent bout of updates should certainly work in their favour. In related news, Tata Motors is said to have plans to expand its partnership with Coimbatore-based Jayem Automotives, with a JTP version of its Nexon compact SUV in the works.

Its official! All-electric Tata Nexon EV in the works