Along with adding the new features, Tata has also hiked the prices of the two SUVs.

Tata has announced that it will add more features to the Harrier and Safari SUVs, essentially ones from the Jet edition models. Alongside this, Tata has also hiked the prices of the two SUVs.

As mentioned, many of the features that were introduced with the Jet Editions of the two SUVs will be available from XMS variants onwards on the Harrier and Safari.

The Harrier now gets USB Type C ports in the front row for all variants, while XZ and above will get them in the second row as well. The XZS variants and higher also get enhanced ESP, which includes panic brake alert, after-impact braking and driver doze-off alert. The XZ+ variants get the electronic parking brake, disc brakes on all four wheels, wireless charger and enhanced features for iRA, including smartwatch app connectivity, feature usage analytics, monthly health report, auto and manual DTC check and drive analytics.

The Safari also gains the same new features as the Harrier, except for the all-wheel disc brakes which it already came with; the Gold Edition only gets enhanced features for iRA. However, the comfort head restraints from the Jet Edition are only added to the XZ+ variants.

Tata has also increased the prices its entire line-up, including that of the Harrier and Safari, receiveing an average hike of 0.9 percent.

Here is a detailed break up of the Tata Harrier's prices:

Here is a detailed break up of the Tata Safari's prices:

Discounts of up to Rs 65,000 on Tata Safari, Harrier, Altroz, Tigor, Tiago in November 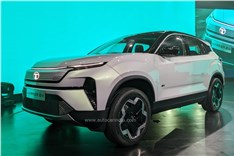