India's first all-electric compact SUV, the Tata Nexon EV is said to have a range of over 300km on a full charge; bookings open tomorrow for the EV that's expected to be priced between Rs 15-17 lakh. 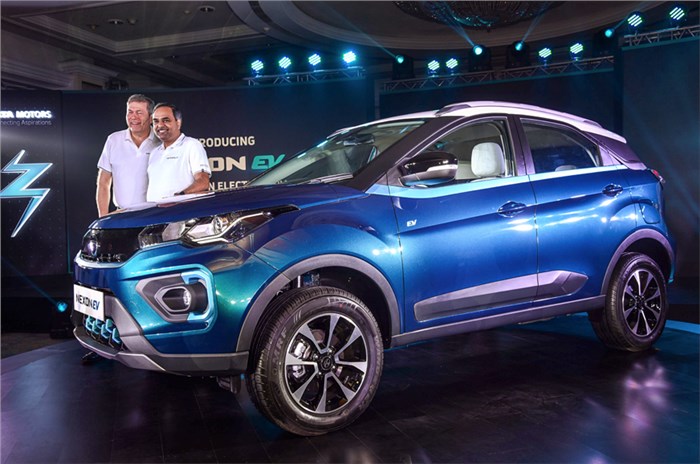 Bringing an end to a long-drawn teaser campaign, the Tata Nexon EV has finally made its world premiere today in Mumbai, ahead of its early-2020 launch. Bookings for Tata's upcoming electric compact SUV offering will open tomorrow for Rs 21,000.

Previewing the styling of the Nexon facelift (also due early next year), the Nexon EV has a number of design touches that help distinguish it from the ICE Nexon. Size-wise, the EV is almost identical to the standard Nexon. The Nexon EV will be offered with a unique paint option called Electric Teal – which was previewed on the Tata Altroz EV at the 2019 Geneva motor show – and will have blue highlights on the outside.

Said blue highlights will also be visible on the inside – around the 7.0-inch digital instrument cluster and on the centre console. Interestingly, the gear selector on the Nexon EV is a dial. There are over 30 connectivity features on offer (including remote commands, and alerts like instructions and tow-away warnings) with the Nexon EV that are accessible via a smartphone application as well as through the car's infotainment system.

Making use of Tata's new Ziptron EV technology, the Nexon EV gets a 30.2kWh lithium-ion battery pack that powers an electric motor capable of 95kW (129hp) and 245Nm of torque. In terms of performance, Tata claims the EV will hit 60kph in 4.6sec and 100kph in 9.9sec from standstill. While the exact range was not disclosed, the carmaker did say than on the Modified Indian Driving Cycle (MIDC), the Tata Nexon EV's range will be over 300km on a full charge. This would give it a running cost of less than Re 1/kilometre which the company claims is about 1/5 times the cost of an IC engine car. Tata says they've tested the powertrain over 1 million kilometres.

Like most EVs being introduced in India, the battery of the Nexon e-SUV comes with an IP67 rating. The company also claims an AIS-48 nail-penetration rating – which is valid for not just the pack and modules but also valid at an individual cell level. The battery is placed underneath and Tata says that it hasn’t pushed up the floor, thus keeping the seating position the same as the regular Nexon. The electric compact SUV's ground clearance, however, is marginally lower at 205mm, against the regular car's 209mm.

The Nexon EV does get fast-charging capability, and using a DC fast charger (compatible with CCS2) can take it from 0-80 percent charge in just 1hr. However, using a standard 15A AC charger, it will take between 8-9hr to reach a full charge. The Nexon EV also gets a hill-assist (both ascent and descent) function and an energy regeneration function to replenish the battery when the compact SUV is coasting; and the company says that it has been perfectly tuned to Indian traffic conditions so as to maximise charging potential. Tata is also offering an eight-year/1,60,000km warranty on the Nexon EV's battery and motor.

As with the standard Nexon, the electric version gets dual front airbags and Isofix child seat mounts.

The Nexon won’t be the only EV in our market upon launch, currently there is the Mahindra eVerito, Tata Tigor EV and the Hyundai Kona Electric available to retail customers, however the Nexon EV will kick-start a range of long-range EVs that will come in below the Rs 20 lakh mark.

MG will bring the ZS EV in January 2020, and Mahindra, too, is working on the eKUV and the eXUV300. Meanwhile, Maruti has its electric Wagon R under development and Renault is expected to bring an electrified version of the Kwid to the market soon.