Tata Harrier: All you need to know

The Harrier SUV will launch in January next year with a single engine-gearbox combination; to rival the Hyundai Creta and Jeep Compass. 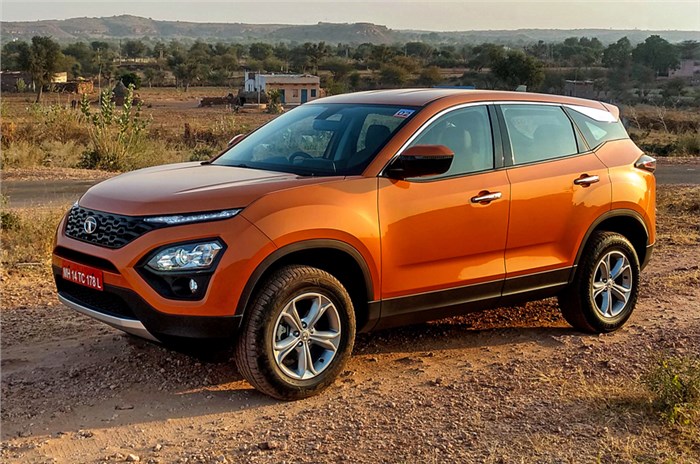 Tata has been releasing teasers and images of its new Harrier SUV for a while now and during its media drive event, has announced more details about its upcoming five-seat SUV.

Based on our exclusive report on the Harrier’s size, the Tata is bigger than its rivals by a good margin. As the Harrier shares its platform with the rather large (for this segment) Land Rover Discovery Sport, it is nearly the same size as its British counterpart, and as such dwarfs a large selection of its competition. The five-seat SUV measures 4,598mm in length, 1,894mm in width, 1,706mm in height and has a wheelbase that is 2,741mm long. The ground clearance is pegged at 205mm. The Harrier boasts a fuel tank capacity of 50 litres and tips the scales at 1,675kg, which makes it a bit heavier than its rivals, though its 235/70 R16-235/65 R17 tyres are at par (with a spare wheel that is 235/70 R16).

The Harrier shares its transversely-mounted 2.0-litre diesel engine and 6-speed manual gearbox with the Jeep Compass. However, in the Harrier, this motor will make 140hp and 350Nm compared to the Compass’ 173hp/350Nm powerplant. At launch, this will be the only powertrain option, though a Hyundai-sourced six-speed automatic and a petrol engine will join the lineup at a later date. For more on why Tata chose this setup for the Harrier, check out: Tata Harrier: 5 development secrets.

While the Harrier’s platform and powertrain are shared with capable off-roaders, it is interesting that Tata will not offer four-wheel-drive with the model, at least for now. However, it will get a Land Rover-like Terrain Response controller with multiple modes (Normal, Wet and Rough) for the ESP system. A few teasers also showed the Harrier being tested in tough conditions. This means that the Harrier will be more capable off the beaten path than its front-wheel-drive rivals. Additionally the model will also come with Tata’s Multi Drive 2.0 that comprises of Eco, City and Sport modes.

While it shares it underpinnings with the Discovery Sport, the Harrier comes with an independent front suspension with McPherson struts at the front and gets a semi-independent twist blade setup at the rear.

Braking duties on the Harrier are carried out by discs up front and drums at the back.

On the features front, Tata will equip the Harrier with plenty of goodies, including a unique twin-screen setup. The 8.8-inch infotainment display and the 7.0-inch digital MID will share info with each other. Both screens will be able to display information such as turn-by-turn navigation, music and other infotainment data. The brand has teased more equipment confirming the Harrier will get a JBL sound system, a cooled storage space under the front centre armrest and puddle lamps. However, the model will not be offered with a sunroof, which is a feature that many Indian buyers look for in this segment. The model sports an 8-way adjustable driver’s seat, four-way adjustable passenger front seat, a 60:40 split, folding rear seat. The Harrier has a 425-litre boot, and folding the rear seats takes that up to 810 litres.

The Harrier’s infotainment system consists of an 8.8-inch touchscreen display with nine JBL speakers, which includes four tweeters and a sub-woofer, along with an amplifier. The system comes with Android Auto as standard, while Apple CarPlay will be introduced later. The SUV also comes with 2.4-ampere fast charging ports at the front and at the back.

On the outside, kit that the Harrier gets includes xenon HID headlamps, LED tail-lamps, front fog lamps and LED DRLs.

Tata has equipped the Harrier with a decent amount of safety kit that includes six airbags (driver, front passenger, seat side and curtain) and ABS with EBD, along with corner stability control, hill-hold and hill descent control, a roll-over mitigation system and hydraulic brake assist. It also gets Isofix child seat mounts at the rear.

Based on its expected Rs 16-21 lakh on-road price tag, the Harrier will have plenty of rivals spanning more than one segment of SUVs. This selection starts with the Hyundai Creta (top-spec diesel-manual retails at Rs 15.10 lakh ex-showroom, Delhi) and goes all the way to the Jeep Compass (with a Rs 21.13 lakh ex-showroom, India price tag for the 4x2 diesel).