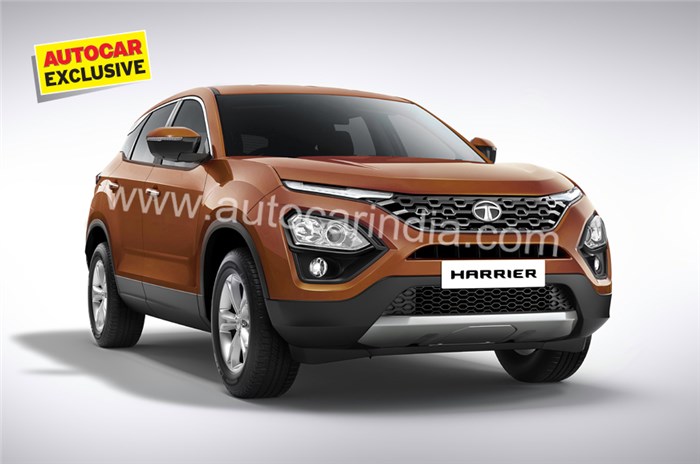 We exclusively bring you the length, width, height, weight and more of the new Tata Harrier. We compare the new SUV to rivals including the Hyundai Creta, Jeep Compass and XUV500, on paper.

Tata’s all-new Harrier is one of the most awaited launches of 2019. Scheduled to be revealed in full next month and arrive in showrooms by January next year, a number of facts about the Tata’s five-seat SUV have been confirmed: as it features the brand’s Impact design 2.0 language, it’ll be a looker; it’ll have a 140hp, 2.0-litre diesel engine and 6-speed manual gearbox sourced from FCA; and it’s underpinnings are shared with the Land Rover Discovery Sport.

Now, we can exclusively reveal the Tata Harrier’s dimensions:

Interestingly, the Harrier is a tad larger than the H5X concept it is based on, though the 22-inch wheels that came on the concept have, quite understandably, been scaled down. A bit too scaled down in fact. The production version of the Harrier will come with only 16- and 17-inch wheels to accommodate higher profile tyres in the interest of ride comfort.

What this essentially means for Tata is that it is bringing a much larger SUV for its price bracket. To put this into perspective, let’s take a look at its rivals: the Hyundai Creta, Jeep’s Compass and Mahindra’s XUV500.

Compared to the Hyundai, the Tata is 328mm longer, 114mm wider, 84mm taller and has a wheelbase that is 151mm longer. The Compass is also smaller than the Harrier by a decent margin. The former is 203mm shorter in length, 76mm narrower, 74mm shorter in height and has a wheelbase that is 105mm shorter too. The Mahindra, despite having seating for seven, is also slightly smaller – its wheelbase is 41mm less, its length is 13mm less and its width is 4mm less, though it stands 71mm taller than the Tata. This bodes well for the Harrier’s interior space, with the numbers showing that it could be class-leading.

As the Harrier is larger than its competition, it does take a penalty in the weight department. The Creta is the lightest of the lot, while the XUV500 is the heaviest. However, the Mahindra and the Jeep come with an all-wheel-drive system that does add to their respective kerb weights, a feature that the Harrier will not get in the near term.

Despite Tata promising class-leading wheel sizes on the Harrier thanks to its Impact Design 2.0 philosophy, based on the table, it is on par with its rivals. The tyres on the Tata are thicker than average though. The XUV500 has the largest tyres and wheels here while the Hyundai’s are the smallest in comparison.

As the Harrier will only be available in a diesel-manual combination at launch, we have only considered the same versions for its rivals. We had reported earlier that the Harrier and Compass diesel share the same engine and gearbox. However, the Compass has it in a 173hp/350Nm state of tune while the Harrier is expected in a lower 140hp/350Nm state of tune. The Hyundai’s motor is the smallest of the lot, which reflects in its output figures as well. The XUV500 may have the largest capacity motor, which is reflected by its higher torque figure, though the Compass is the most powerful SUV here. All the models on this comparison come with a 6-speed manual transmission as standard.

A point to note: the Creta is also available with a 1.6-litre petrol-manual and petrol-automatic, a 1.6-litre diesel-automatic and a 1.4-litre diesel-manual. The Compass also comes with 1.4-litre petrol-manual and automatic options, while the XUV500 gets the option of a 6-speed automatic on its diesel motor, along with a petrol-automatic combo. Tata has no immediate plans to introduce a petrol-powered Harrier, a point that gives its competition a leg up in terms of options.

Based on its estimated price, the Harrier directly takes on the Creta and XUV500 while undercutting the Compass by a significant margin. More technical details, the features list and further info about the Harrier will be revealed closer to its official unveil, but so far, it seems like Tata’s new SUV has what it takes to go head-to-head with its rivals.

SCOOP! No AWD for Tata Harrier