Previewing a brand-new rival to the Hyundai Creta and Kia Seltos, first exterior sketches of the Skoda Vision IN concept confirm it will borrow styling cues from the Kamiq sold abroad. 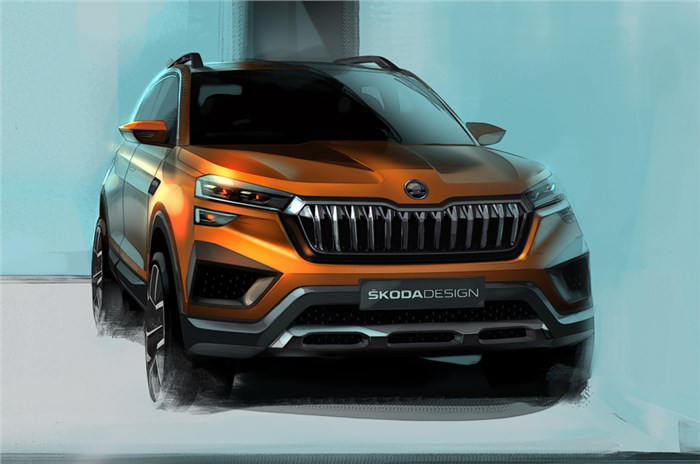 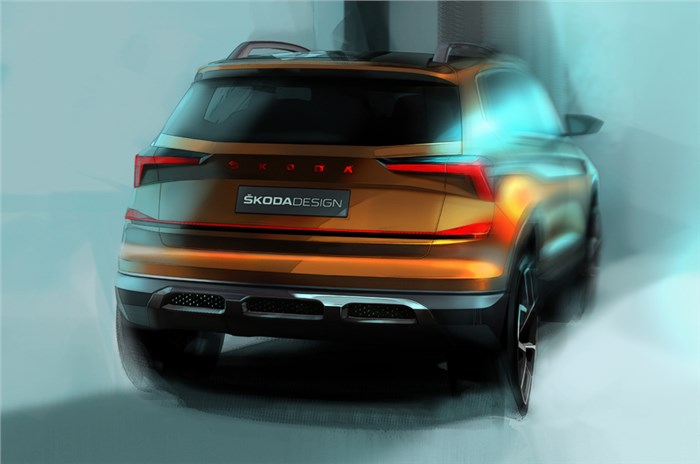 In less than a month from now, we will see Skoda's upcoming midsize SUV for India in concept form. But before that happens, we now bring you first exterior sketches of the Skoda Vision IN concept, which gives us our first peek at the design language of what is set to become a key new model in the carmaker's India line-up.

The first exterior sketch provides a glimpse of the Skoda Vision IN’s face – it echoes the design of the Kamiq sold abroad, but has a bolder, more upright nose, with the trademark chrome-embellished Skoda grille flanked by split projector headlights and the angular bumper featuring large air intakes and a three-slot skid plate. Also visible is the plastic cladding all around, prominent roof rails and large alloy wheels befitting a concept.

At the back, too, the Skoda Vision IN has a lot in common with the Kamiq in terms of design, with its crystal-like LED tail-lights, but sports an additional light strip that spans the width of the SUV as well as a three-slot skid plate, similar to the one at the front.

Skoda had previously revealed that the Vision IN SUV concept measures in at 4.26m in length – roughly the same length as the Brazil-spec Volkswagen T-Cross and the current-gen Hyundai Creta.

The interior sketch Skoda shared in December 2019 confirmed the presence of a number of elements that are now becoming standard across all new Skoda models. Taking centre stage inside the Vision IN is a large free-standing touchscreen infotainment system, and right next to it is the Virtual Cockpit digital instrumentation. Also expected on the production version of the Skoda Vision IN are automatic climate control, a panoramic sunroof, rear AC vents, two USB charging ports at the rear, drive modes, ambient lighting and more.

Skoda's upcoming midsize SUV will be the first model based on the India-specific MQB A0 IN platform. What we can also tell you is the production-spec Skoda Vision IN SUV will have a 2,651mm-long wheelbase, and will have plenty of space for rear seat passengers.

Zac Hollis, director of sales, service and marketing, Skoda Auto India, has confirmed that the production-spec Skoda Vision IN SUV’s India launch will take place sometime between April-June 2021. By the time it arrives, the Skoda Vision IN will go up against the next-gen Hyundai Creta, Kia Seltos, MG Hector, new Mahindra XUV500 and Maruti Suzuki’s upcoming midsize SUV.

What do you think of the exterior design sketches of the Skoda Vision IN? Let us know in the comments.

Skoda Vision IN concept to be unveiled on February 3