New Tata model will slot below the Nexon in compact SUV portfolio; India launch slated for later this year. 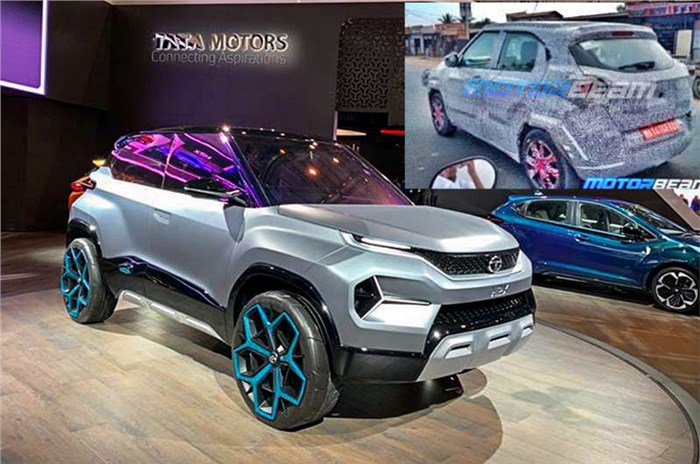 Tata Motors has begun road tests of the production version of its new micro SUV based on the H2X concept. The model is expected to see a world premier at the upcoming Auto Expo 2020. The production-spec H2X micro SUV from Tata will sit below the Nexon in the brand’s India line-up. A first set of spy shots have emerged online, that giving us a hint on what to expect from the new Tata micro SUV.

First up, the vehicle looks quite similar to the concept as far as the silhouette and design cues go. It features a prominent squared-off look with an upright stance; it's less rounded and clearly looks more butch than the Nexon. This new SUV, codename X445, will be the second model based on the automaker's ALFA platform – the first being the Altroz hatchback that will launch on January 22, 2020. The H2X concept had multiple styling bits similar to the H5X concept that spawned the Harrier SUV. Going by these spy shots, the production-spec micro SUV could follow suit.

When launched, the Tata micro SUV will be positioned below the Nexon but above the Kwid. As far as dimensions go, the H2X concept was 3,840mm long, 1,822mm wide and 1,635mm long along with a 2,450mm wheelbase, making it slightly bigger than both the Kwid and the S-Presso but closer to the Mahindra KUV100. The test mule spied looks like a top-spec version replete with alloy wheels that could be at least 15-inchers, and a rear washer and wiper. On the inside, expect the H2X-based micro-SUV to share bits like seats and other switchgear from the current Tata offerings like the Tiago and the Tigor – including the full-digital instrument cluster and the infotainment screen. The concept featured a huge glass roof, but it remains to be seen whether the production-spec micro SUV gets a sunroof.

Under the hood, the new Tata Micro SUV will most likely come with a BS6 compliant 1.2-litre three cylinder petrol engine that sees duty on the Tiago. We expect this engine to be sold with either a 5-speed manual gearbox or an AMT.

Market launch for the new Tata micro SUV could still be some time away as the company is currently gearing up to introduce the Altroz (on January 22) facelifts for the Tiago, Tigor and the Nexon including the Nexon EV. Additionally, the company will also unveil the seven-seat Gravitas SUV and the Tata Harrier automatic with a panoramic sunroof at the 2020 Auto Expo.