Ferrari claims "class-leading levels of driver engagement" without any loss in performance over the coupe version. 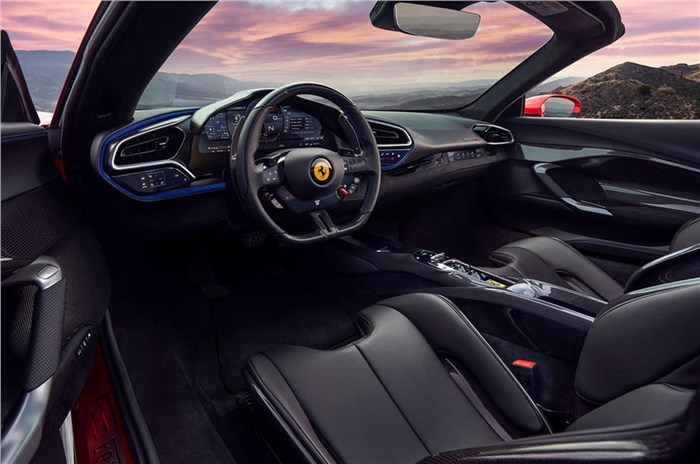 Ferrari has taken the wraps off the new 296 GTS – an open-top version of the firm's new mid-engined hybrid supercar, the 296 GTB. The new Ferrari 296 GTS is one of two new models Maranello will reveal this year, with the highly anticipated Ferrari Purosangue SUV due in the coming months to complete the line-up.

In keeping with Ferrari tradition, the differences between the hardtop Ferrari 296 GTB and its convertible sibling are minimal and limited chiefly to subtle styling revisions to accommodate the opening roof.

So, silhouette-wise, the two cars are nearly identical, but the retractable hardtop – a similar set-up to that used by the Ferrari SF90 Spider – is stowed in a new bay inside the engine compartment, behind the seats.

This means that the 296's rear deck has been reworked, with re-sculptured buttresses and a more prominent step between the roof and the distinctive 'aero bridge' that spans the width of the car. There is also a new window at the bottom of the engine cover, and the rear screen is adjustable to ensure cabin comfort at high speeds with the roof down.

The overall effect of the subtle makeover gives "an extremely compact cabin effortlessly integrated with the wings and flanks".

Aerodynamic efficiency and downforce are on a par, too – with Ferrari engineers taking care to ensure the airflow impact of the wing and buttresses is replicated – and there is still an active rear spoiler stowed in the tail, which increases downforce at speed.

The roof itself takes just 14 seconds to open or close at speeds of up to 45kph, splitting into two sections that fold over the front of the engine – "thus maintaining the engine bay's thermal dissipation characteristics and the balance of the overall design".

The GTB's powertrain is carried over wholesale, with the 664hp, 3.0-litre twin-turbocharged V6 paired with a rear-mounted, 166hp electric motor to take the total output to 830hp and 740Nm.

While an India launch as not been officially announced as of now, we expect Ferrari to open order books for the 296 GTS in the near future. Meanwhile, the 296 GTB coupe is soon expected to be in showrooms in India by mid-2022.