Does this updated Modificato version help cement the Portofino’s place in the Ferrari range? 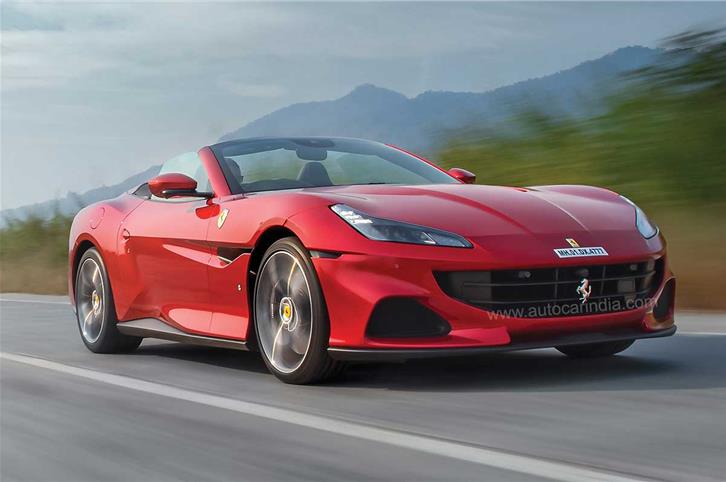 The Ferrari Portofino was recently supplanted by the Roma as the ‘baby’ of the range, but things have not always been so cut and dry for the entry-level convertible. You see, despite being a phenomenal car and a great Ferrari (just ask anyone who’s driven one), it is also burdened with being too many things to too many people. It has to be a comfy and practical GT, a 2+2 seater (barely, admittedly), a svelte coupé, as well as a drop-top, and it has to have the latest tech and luxury to compete with the best in the game. Its forebear, the California, though a commercial success, wasn’t met with the same sort of universal acclaim from critics as most Ferraris are, and a legacy like that tends to linger. Above all this, the Portofino has to feel like a proper Ferrari, and it’s in this last area where the car we’re driving today – the Portofino M – comes in.

M stands for Modificato, which translates rather un-sexily to ‘modified’. So, technically, this is a mid-life update for the Portofino, something Ferrari doesn’t do with its other model lines anymore. Don’t, whatever you do, call it a facelift, however, because that would not do justice to the amount of engineering that’s gone into it. Yes, there have been some visual updates too, but as you might expect, most of them are functional. There are bigger, angrier air intakes in the front bumper, new vents in the bonnet, and at the rear, a larger, more aggressive diffuser. That last bit was a function of performance too, because to meet new emissions regulations, the Portofino had to be fit with Gasoline Particulate Filters (GPFs) which tend to dull the noise the car makes. To counter this, Ferrari reprofiled the exhaust and simply deleted the silencers, so now it’s louder than ever! And this also freed up space at the rear for that bigger diffuser. To these eyes, it’s still not the prettiest Ferrari, but it certainly looks more purposeful now. 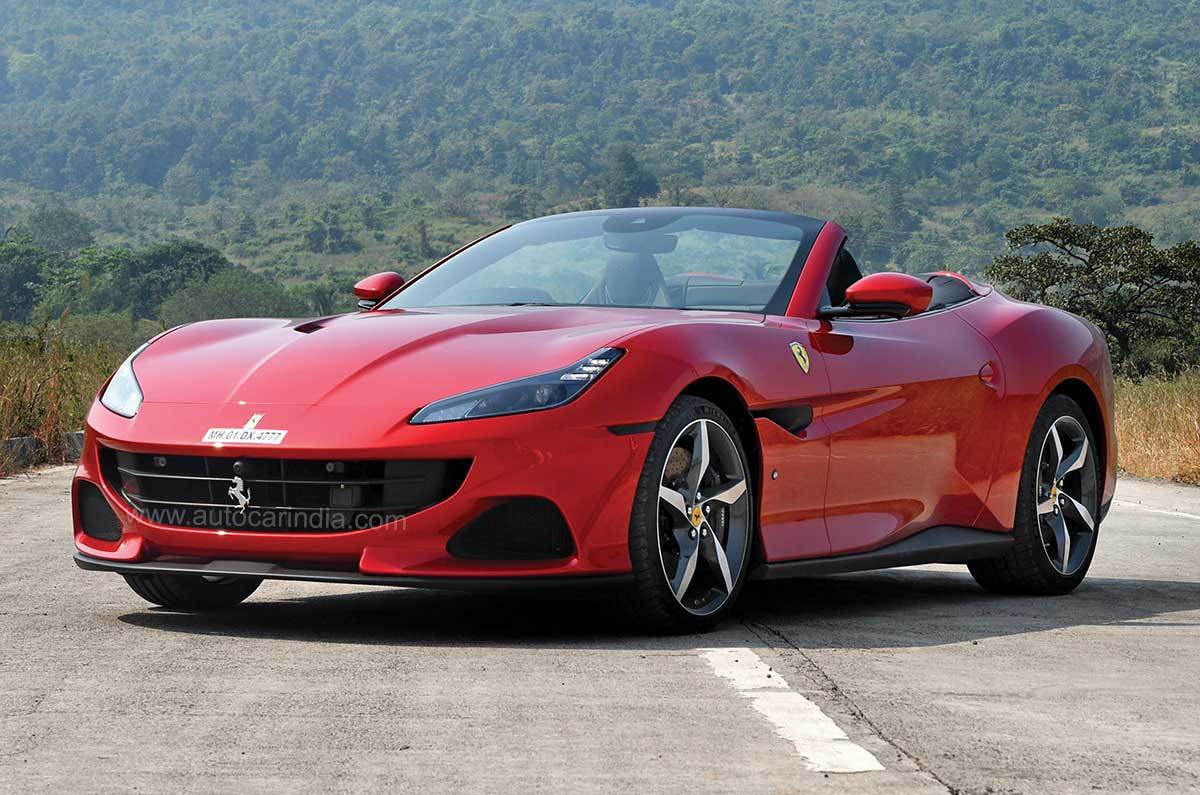 The meat of the mods is in the powertrain, however. The 3.9-litre twin-turbo V8, like in the Roma, puts out 20hp more, at 620hp and 760Nm, and this was achieved thanks to new cam profiles, and a new speed sensor for the turbochargers. The 7-speed dual-clutch auto has been ditched for an 8-speed unit, again from the Roma, and while the eighth ratio is taller to boost highway efficiency, it’s allowed Ferrari to shorten gears one through seven and stack them tighter for more aggressive acceleration. The biggest clue to the M’s new-found sporty intent is the Mannetino switch on the steering wheel, which now has five modes, including Race – previously deemed too serious for the cushy Portofino. 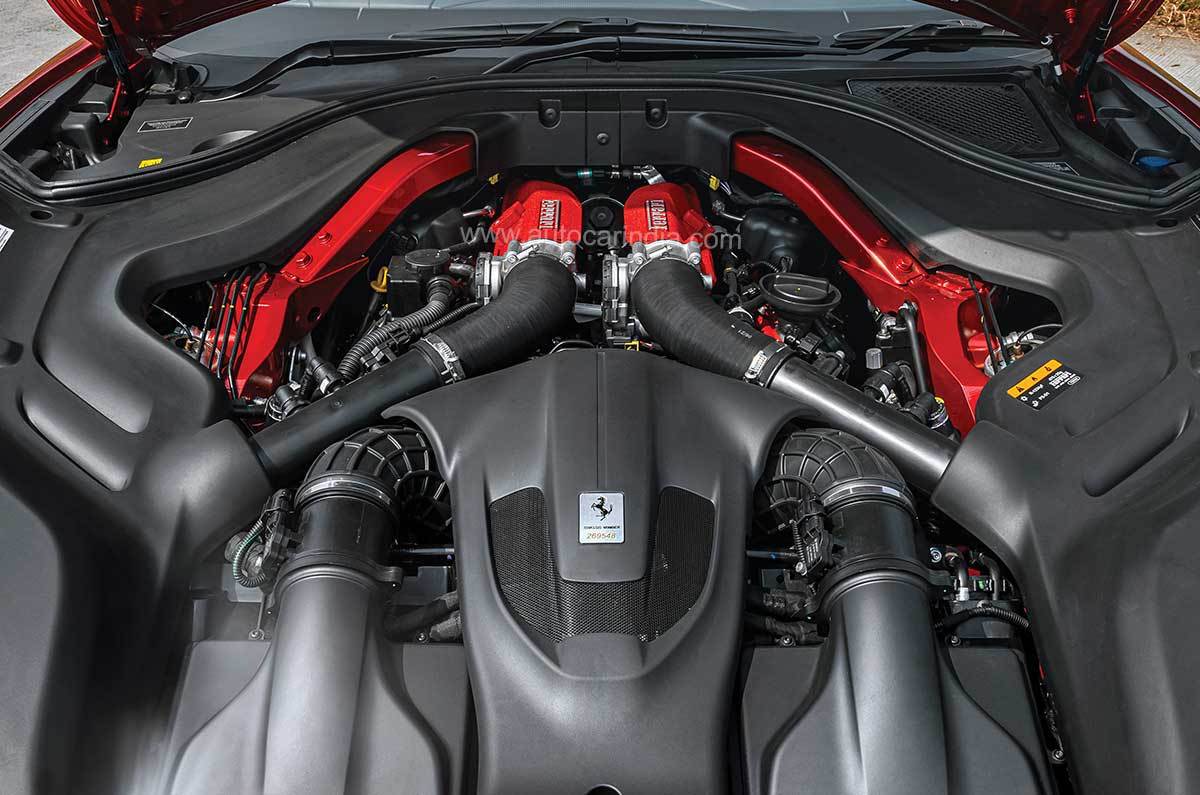 New cam profiles and faster turbo sensors have bumped power up to 620hp.

The inside hasn’t changed much – for better or for worse, depending on whom you ask. Ferraris have been evolving so fast that even this four-year-old interior is starting to look dated by the brand’s own standards. Personally, I prefer it to the newer stuff. I love that the tachometer is not a screen but a proud analogue dial in the centre, and that the steering wheel has real, solid buttons and switches, rather than haptic ones. I love that the AC vents are the beautiful, round, jet-turbine funnels that can be focussed directly on your face, and that clear, simple buttons operate the gearbox, not a gimmicky faux gated ‘shifter’. 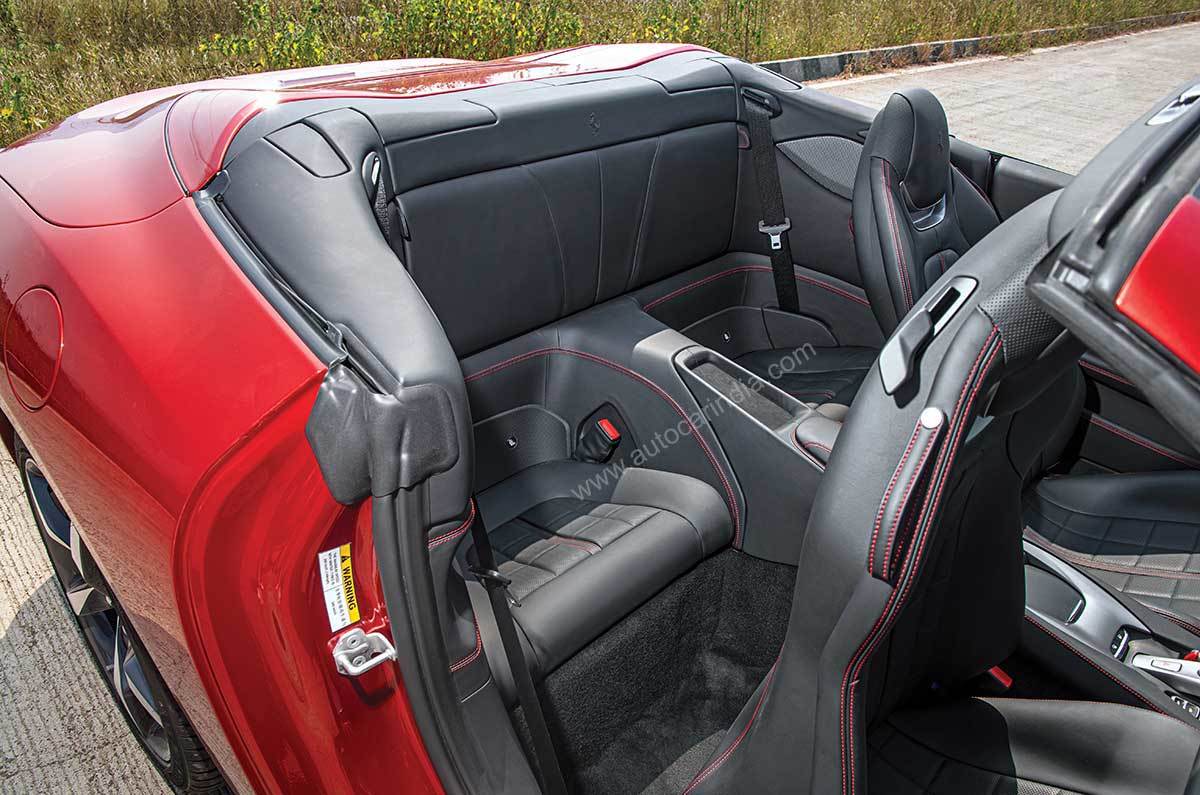 Yes, the touchscreen isn’t as quick or slick as you’d find in a car of German origin, but then Ferrari’s newer system is no better. They have at least updated the tech behind the screen, however, and the Portofino does its best to keep up with the Bentleys and Porsches of this world. Amongst other things, many of them optional, there’s a new suite of sensor-based ADAS tech, a surround-view camera, and the optional front passenger info screen is now touch operable. 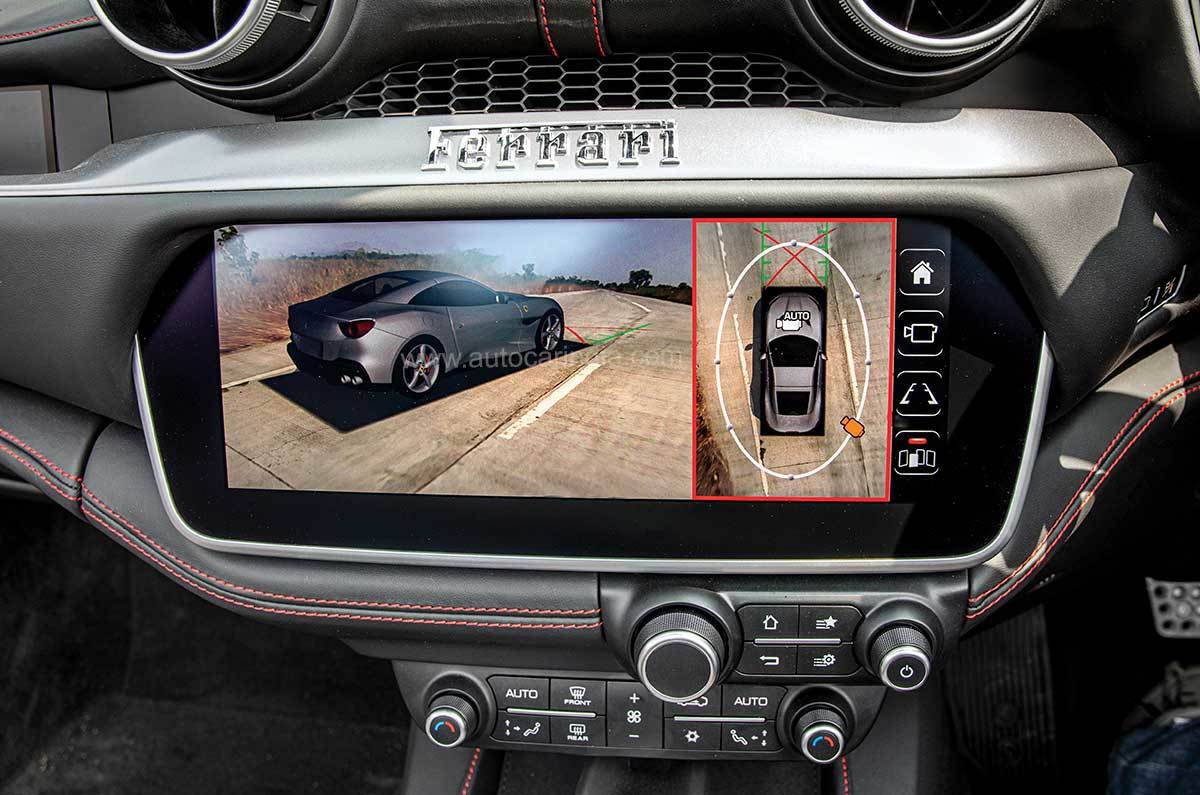 Touchscreen not quite as slick as rivals but is packed with features.

The joy of prodding that lozenge of a starter button on the steering wheel is something I’m definitely going to miss once it’s gone, but hopefully a Maranello V8 erupting to life is a sound we’ll continue to hear for decades to come. They were right; the new exhaust is louder, and the sense of occasion it creates allays any doubts you might’ve had of this being a ‘lesser’ Ferrari. ‘Clack’ goes the tall, column-mounted shift paddle into first, satisfying in a way few others are, and we’re off.

So far, so Portofino, and I’m beginning to wonder what the fuss was all about. In Comfort mode, we’re motoring along with the sort of ease and comfort that might shame a few luxury cars. The standard 20-inch wheels do nothing to change my mind, we’re not even in the ‘bumpy road’ setting, and there’s even enough ground clearance to get over an unexpected hump of gravel that had been excavated right in the middle of the highway. Suffice it to say, then, the grand touring credentials have carried over to the M unscathed, even in a very Indian context. You will, of course, have to treat exceptionally huge speed breakers with care – but the sort of care you’d show a sports sedan, not a supercar. 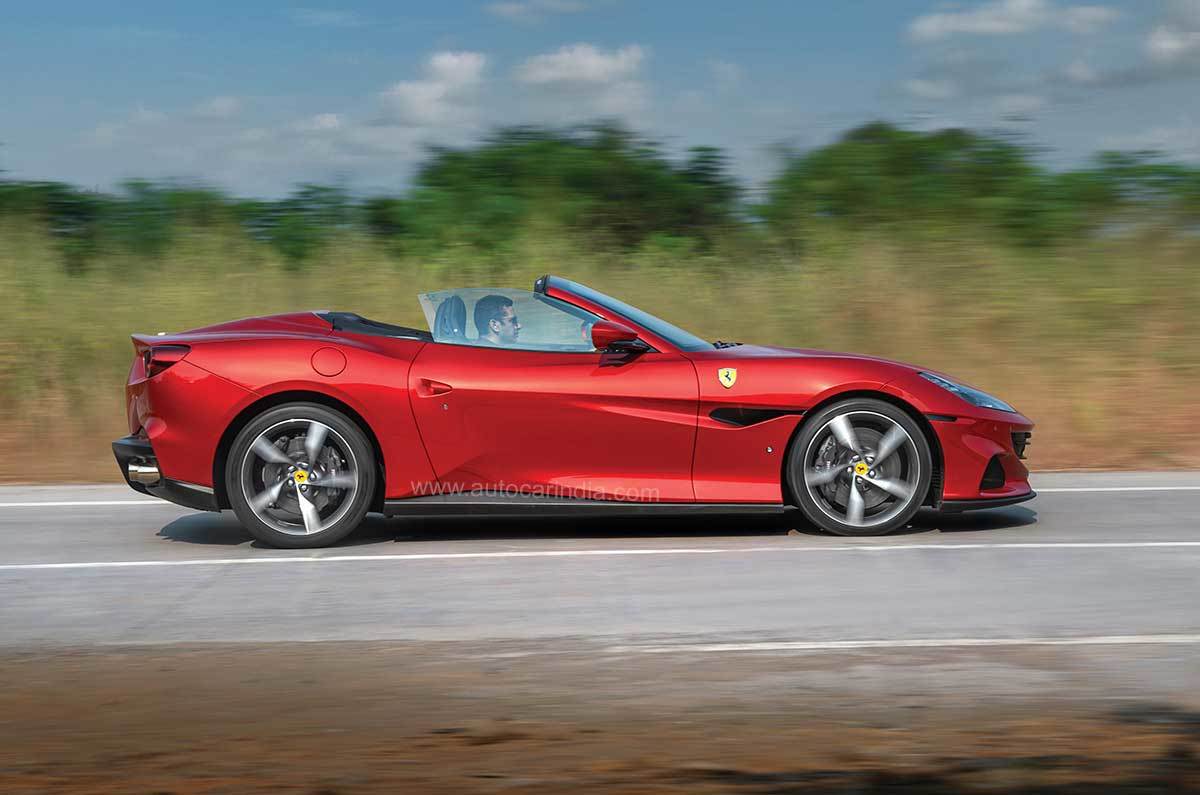 I’m still not convinced, so I think switching to Sport is in order and… there it is! I’m instantly goaded on to acquaint myself with those 20 new horses, and I’m pretty sure they live somewhere near the 7,500rpm redline! The sound, the acceleration, the chassis – it all comes together like a tightly orchestrated symphony. I ‘clack-clack-clack’ up the tighter ratios of the gearbox, the needle hitting the redline quicker than I can anticipate; there’s a rawness that just wasn’t present in the Portofino before. The shifts themselves are some of the quickest in the business, and the soulful V8 bellow that accompanies every pull of the left paddle will go down as one of the greatest noises to ever come out of a machine.

The brakes – carbon ceramic as standard, as is the Ferrari norm – are not the on/off switches they sometimes tend to be. The first few inches of pedal travel yield a gentle, progressive bite – perfect for slow driving or gentle cruising, but prod a little further and it’s like throwing an anchor out of a speeding powerboat; you’re hauled down to a standstill very rapidly. 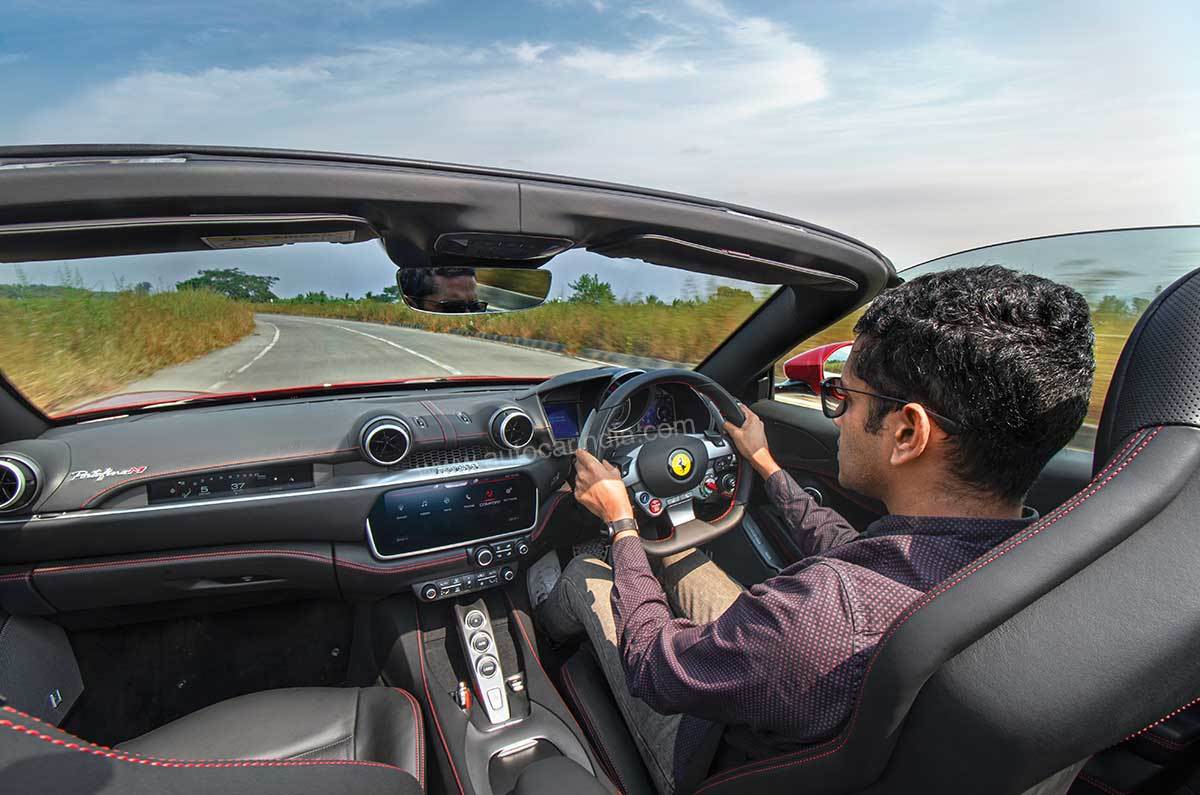 At first, that ultra-quick steering that’s defined Ferraris since the 458 Italia catches me off guard; maybe it’s a bit too much for a GT like this. But it’s so light and easy to get used to, and so rewarding once you do, you soon start to wonder why every car isn’t set up like this.

Even in this meekest of its various iterations, the engine is an absolute jewel. It sounds particularly enchanting here, with no roof between you and the exhaust pipes. On a prior visit to Maranello, I remember asking an engineer what credence he could put to Ferrari’s claim of having eliminated turbo lag altogether. With typical charming Italian nonchalance, all he said was, “Is not there.” I chuckled dismissively at it then, but I’m thinking of the chap right now. The Porsche 911’s 3.0 twin-turbo flat six is the only other engine I can think of that comes even close to a naturally aspirated feel, but this is on another level! 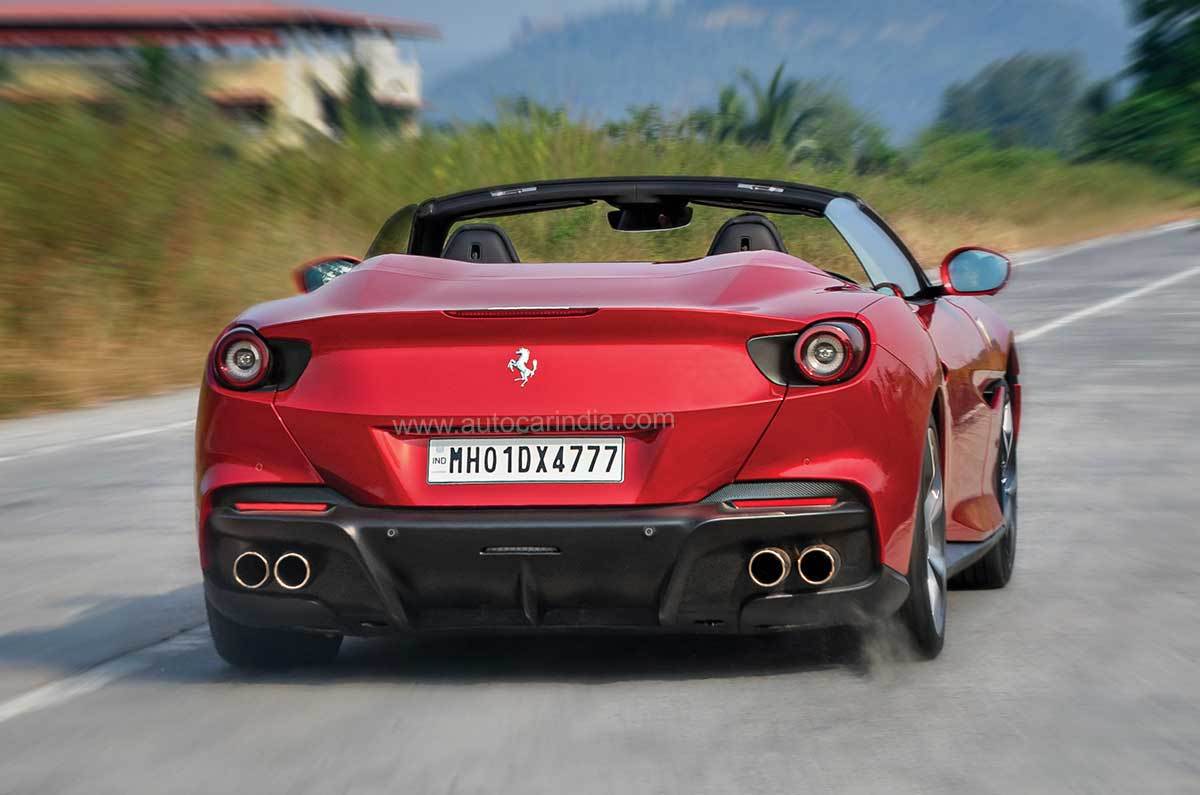 New exhaust does away with silencers, so it’s noticeably louder now.

Gurning like a fool as I am in Sport mode, I don’t even feel the urge to twist the Mannetino to its new Race setting. Besides, I doubt it would make too much of a difference on this public road. Race mode is less about the engine and more the chassis and its associated systems. It’s meant to let you measure your limits as a driver against the lofty limits of the car, with a comprehensive electronic safety net all but preventing you from going off. Perhaps someday on a racetrack somewhere, I’ll get the chance to experience it to its fullest, but not today.

Was there ever really any cause to doubt the Portofino? Okay, when you consider it’s nearly 100kg heavier than the Roma, thanks to the folding hard top and associated chassis strengthening, and that it’s deliberately set up to be friendly and usable, perhaps you can see why some ‘purists’ might be a little dismissive of it. But forget all that, because in practice, it truly delivers on the complex suite of expectations it’s been tasked with, and that makes it all the more impressive. This new M version subtly enhances the driving experience enough to silence any naysayers, with more power and a very entertaining exhaust note. The price has gone up a bit, of course, at Rs 4.04 crore (ex-showroom), before you start speccing it up. In the company of the sexy new Roma and the more engaging F8 Tributo, it will still not likely be every Ferrari buyer’s first choice, but as a car that does so many things, and now drives better too, it has most definitely earned an indelible spot in the pantheon of the Prancing Horse. 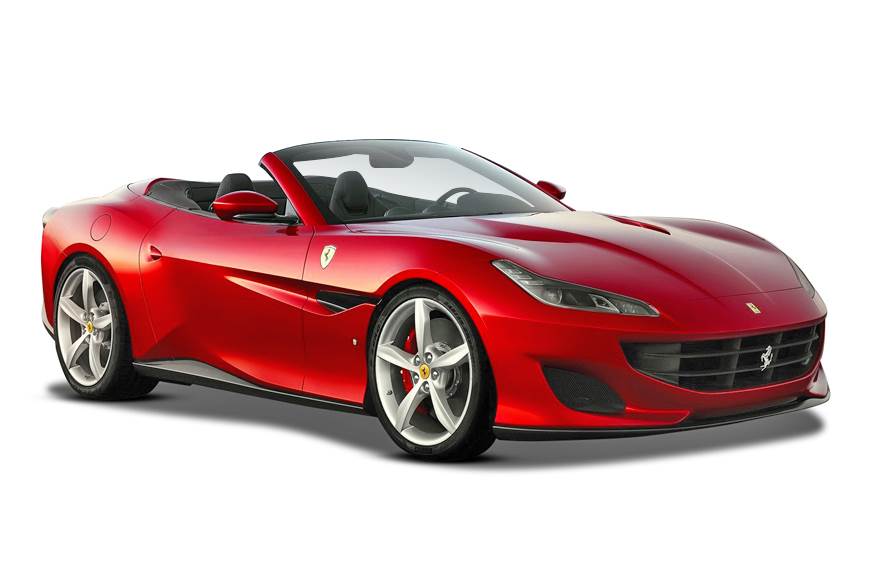 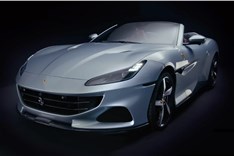 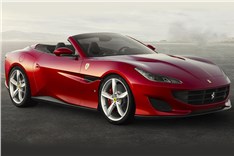