When it arrives in June, Hyundai’s all-new premium hatch has its work cut out for it. We’ve compiled all the facts and figures to see how it compares. 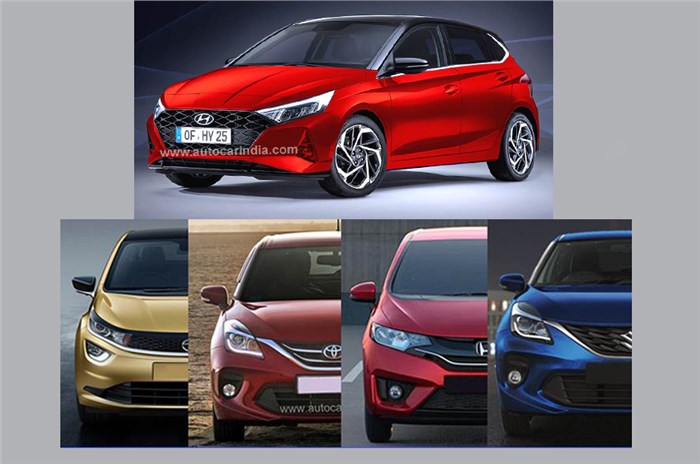 Hyundai’s all-new i20 has just been revealed for international markets, providing quite a few interesting details about the model that’ll launch in India in June 2020. When it does arrive in a Hyundai showroom near you, the third-gen Hyundai i20 will contend in this competitive premium hatchback segment against rivals old and new – from the recently launched Tata Altroz to the Maruti Suzuki Baleno, Honda Jazz and Toyota Glanza. Here’s how the next-gen Hyundai i20 compares against its rivals in terms of dimensions and features, as well as engine and gearbox options.

How does the next-gen i20 compare on size?

The new Hyundai i20 that will go on sale in India is expected to be nearly identical in size as the model revealed for international markets. As we reported earlier, the international-spec next-gen i20 is 5mm longer, 16mm wider and 24mm shorter in height than the current model, and has a wheelbase that’s 10mm longer. However, expect the India-spec model to be a bit shorter in overall length to qualify for tax sops for cars under four metres and a bit taller than the international car, as ground clearance will be higher. For reference, the current Euro-spec i20 is 50mm longer and 31mm shorter in height than the current India-spec i20.

While still ducking under the crucial four-metre mark in length, the next-gen Hyundai i20 will come with the longest wheelbase. This bodes well for the amount of legroom that will be on offer. The Honda Jazz will still have the largest boot, though it’ll hold just 3 litres worth of additional luggage. While the Tata Altroz will have the smallest wheelbase here it will also be the widest (just 5mm more than the i20). While it's likely that Hyundai will give the India-spec i20 smaller, ride-friendly 16-inch rims, it's the Jazz that'll standout with the smallest wheels among the lot. The Maruti Baleno and Toyota Glanza will not be among the largest or the smallest on any metric.

How does the next-gen i20 compare on features?

This is usually where Hyundai scores major points and the next-gen i20 will not be an exception. Compared to the outgoing model, the new i20 will get a much larger 10.25-inch touchscreen infotainment screen, ambient lighting and Hyundai’s BlueLink in-car connectivity tech. While the new international-spec Hyundai i20 will get safety kit like a satellite navigation-based adaptive cruise control system and collision monitoring systems, the India-spec model is expected to get a standard cruise control function that’s accessible via steering-mounted controls. Safety kit will be more or less the same as the current car, which is not a bad thing.

Based on what we expect, the new Hyundai i20’s features list will be among its trump cards, thank to the infotainment system, in-car connectivity tech and all-digital instrument cluster that will be on offer. All the premium hatchbacks do feature fabric seat upholstery and a single-zone automatic climate control system, but only the Altroz, Jazz and new i20 come with cruise control. In terms of features, the Maruti Baleno and Toyota Glanza seem to fall short comparatively.

How does the next-gen i20 compare on powertrains?

The international-spec i20 gets a whopping seven engine-gearbox options, all of which are petrol-powered. The next-gen i20 for India will borrow some of the Hyundai Venue’s BS6-compliant engine-gearbox options – the 83hp, 1.2-litre petrol with a 5-speed manual; the 120hp, 1.0-litre turbo-petrol with 6-speed manual and 7-speed dual-clutch automatic options; and a 1.5-litre diesel-manual that’s expected to put out about 90hp.

With the Baleno RS being discontinued, the new Hyundai i20 with the 1.0-litre turbo-petrol engine will be the most powerful premium hatchback. With a power output of 120hp, the i20 turbo will be the most powerful hatchback in the segment. As before, the Honda Jazz will continue to have the most powerful naturally aspirated engine, though with the least torque. The mild-hybrid Baleno and Glanza also have equivalent horsepower figures. The Altroz is the only model here that doesn’t get a petrol-automatic option, though there is a dual-clutch unit in the works. Unlike the current i20, which uses a CVT automatic mated to the 1.2 petrol engine, the new i20 will come with a dual-clutch automatic gearbox only with the 1.0 turbo-petrol.

While the international model gets a 48V mild-hybrid system, it will unlikely be introduced on the i20 in India. If this technology is provided, it’ll be the third premium hatchback – after the Maruti Baleno and Toyota Glanza – to get a mild-hybrid system.

Coming to the diesel engine options, the Maruti Baleno will not get a BS6-compliant unit, while the Toyota Glanza didn’t even get a diesel mill.

The Hyundai i20’s unit is similar to the Kia Seltos’ 1.5-litre four-cylinder engine, though without a variable geometry turbocharger. Hence, power and torque figures will be down on the Seltos’ 115hp and 250Nm. Still, overall output will be comparable to rivals – the Honda Jazz diesel will have the highest horsepower figure, while the new Hyundai i20 diesel is expected to have the highest torque figure. None of the models will have a diesel-automatic combination.

How will the next-gen i20 compare on price?

Even at this slightly higher price point, the next-gen Hyundai i20’s prices are expected to be quite competitive, at least for the entry-level variants. Higher-spec trims of the Altroz, Baleno and Glanza will undercut equivalent i20 variants, though the Honda Jazz is still expected to be among the priciest premium hatchbacks, especially with the upgrade to BS6-compliant engines.

While there is no doubt that this third-gen Hyundai i20 will be one of the Korean carmaker’s better selling model (just like the current model), it remains to be seen if it’ll be able to dethrone the current sales champion of the premium hatchback segment – Maruti Suzuki’s Baleno.