New HR-V will come with a coupe-SUV design; e-HEV powertrain to be shared with the City. 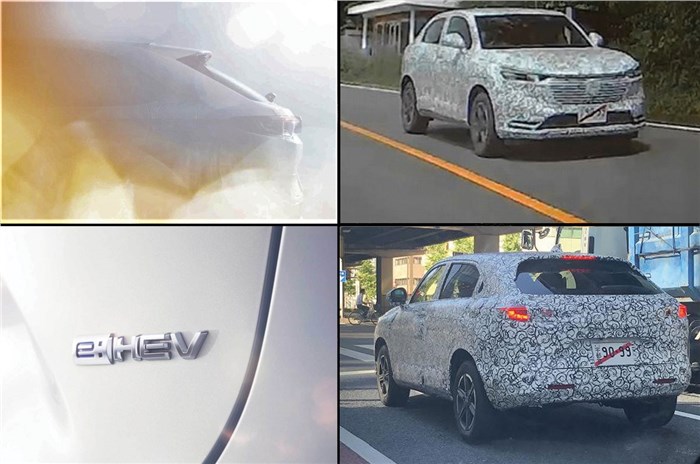 Honda is finally gearing up to introduce the second-generation of the popular HR-V SUV. The new Honda HR-V will see a world premiere sometime next month. The company has also released a first teaser image of the SUV, giving us a hint of its coupe-like styling.

New Honda HR-V: What we know so far

The new HR-V is being tested in Japan since quite some time and while the model was expected to be revealed by late 2020, we can today confirm that Honda will take the wraps off the second-gen SUV sometime around February 18, 2021. The new HR-V is crucial for Honda globally, as it will be the brand's contender in the competitive midsize SUV segment.

What else is known about the next-gen Honda HR-V?

As reported by us earlier, the new HR-V will share its underpinnings and a few interior bits with the latest-gen Jazz. Engine choices includes a 1.0-litre turbo petrol as well as an option with mild-hybrid tech that made its debut on the City e-HEV last year.  As far as design goes, the first teaser confirms that Honda will stick to a coupe-SUV design for the new HR-V as well.

Depending on the market, a number of midsize SUVs will rival the new Honda HR-V, including the Jeep Renegade, the updated Nissan Kicks, and the Toyota Corolla Cross.

Will the new Honda HR-V come to India?

The new Honda HR-V will first go on sale in Japan, followed by other markets like Europe. The company is expected to reveal a slightly different version of the same SUV for markets like North America.

As far as India goes, the outgoing Honda HR-V was slated for a market launch here, but the plan was cancelled. The SUV had a high level of import content, which meant Honda India would be at a disadvantage when it came to pricing, compared to the aggressively positioned, new competition from the Hyundai Creta and Kia Seltos.

There are currently no talks of Honda bringing the new HR-V to India anytime soon.