Upcoming SUV to be positioned below the Hyundai Kona in the brand’s European range. 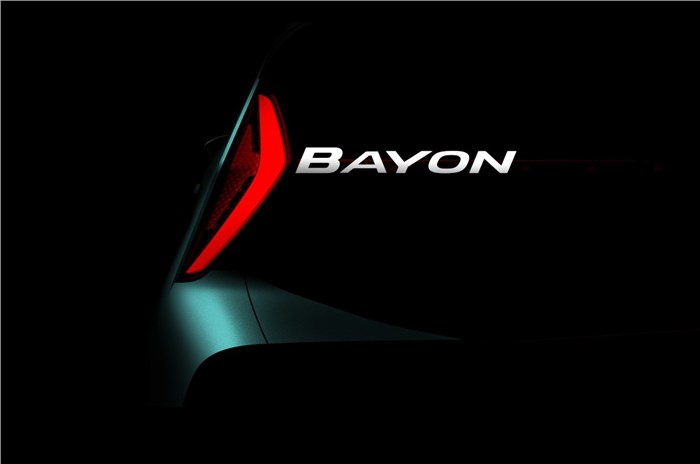 The Hyundai Bayon has been previewed in teaser images, providing a hint as to what the new small SUV will look like. This new model will be the entry point to Hyundai’s European range and sit below the Kona in the line-up.

Designed primarily for the European market, the SUV has been named Bayon in reference to the French city of Bayonne, a hub for outdoor sporting activities, which Hyundai says, highlights "the lifestyle character" of the new model.

The teaser image released shows the new SUV’s crescent-shaped LED tail-light and a bit of the rear end. Expect a chunky, off-road-inspired body kit in line with the SUV's activity aspirations and a tech-heavy interior with a raft of connectivity and advanced driver aids fitted as standard.

Spy shots of a small crossover testing had indicated that this new model was a beefed up i20, and the eventual replacement for the i20 Active on sale in markets abroad.

Given the model's size and positioning, it can be expected to share much of its mechanical make-up with the existing Hyundai and Kia models. It's likely that the Bayon will share its underpinnings with the Hyundai i20.

That would mean a petrol-only engine line-up comprising an 85hp naturally aspirated 1.2-litre four-cylinder, a 100hp mild-hybrid 1.0-litre turbo and a range-topping 120hp version of the same engine. 5- and 6-speed manual gearboxes would be available, as well as a 7-speed dual-clutch automatic.

In European markets, the Bayon will directly take on the likes of the Toyota Yaris Cross and the Ford Puma.

For markets like India and the USA, Hyundai already has the Venue as its smallest SUV offering. Although Hyundai India did have the i20 Active on sale earlier, considering the price and position of the Venue compact SUV, an India launch for the Bayon is unlikely.

However, Hyundai will introduce a three-row derivative of the Creta sometime next year. Additionally, an all-new micro-SUV from Hyundai is being developed for India that will sit below the Venue and will rival the upcoming Tata HBX.