The XM will be BMW’s most powerful production car in India, while the i7 will be the third model in the brand's electric line-up.

BMW India is lining up four new launches that will join its luxury segment in the coming months. The German carmaker’s iX electric SUV has been a sell out and the carmaker has also seen strong demand for the X7 SUV. However, the top tier of the luxury car segment in India is dominated by Mercedes-Benz, with its new S-Class, GLS and the recently launched EQS electric sedan making waves.

But BMW isn’t going to be left far behind. The all-new 7 Series, the new i7 electric sedan, the facelifted X7 and even the XM super-SUV are all lined up for launch in quick succession. Here, we take a close look at each of these upcoming BMWs in India.

The X7 is the only car in this lot that will be a facelift, but it brings with it a fundamental change in styling. Unveiled in April this year, the X7 facelift gets a completely redesigned front fascia while also debuting the brand’s new split headlamp design. The interior also sees a major update with BMW’s latest curved infotainment screen that comprises a 12.3-inch digital instrument cluster and a 14.9-inch touchscreen – running the latest iDrive 8 software.

In India, the X7 will be offered in xDrive 40i and xDrive 30d guise. The former gets a 380hp, inline six-cylinder petrol engine, while the latter uses a 352hp, inline six-cylinder diesel engine – up by 40hp and 87hp over their current spec in India, respectively. Both the engines are coupled with 48V mild-hybrid tech and come mated to an 8-speed automatic gearbox with all-wheel drive as standard.

The XM is only the second bespoke BMW Motorsport product since the mid-engined M1 supercar of the late 1970s. Unveiled just earlier last month, the XM is the first M model with a plug-in hybrid powertrain – it combines a twin-turbo 483hp, 4.4-litre V8 engine with mild-hybrid tech. A single electric motor is bolted inside the 8-speed automatic gearbox that further produces 194hp, for a total power output of 653hp. Torque figure stands at 800Nm combined, and it can even be run in pure EV mode with a range of up to 80km.

Sized similarly to the X7, the XM sure looks radical and will divide opinions on its styling. The interior, however, has a familiar BMW layout, although the rear seating area has been devised as an ‘M Lounge’, placing more of an overt focus on occupant comfort than any M car before it. It also gets the latest iDrive 8 system with the widest range of driver assistance systems ever installed in a BMW vehicle.

The latest 7 Series is now in its seventh generation and is based on BMW’s CLAR platform. Unsurprisingly, the new 7 Series adopts the new family look that debuted with the X7 facelift, and, although polarising, the new design is driven largely by customer feedback from markets such as China and the USA. The interior has also been completely redesigned with the new hidden AC vents, curved screen infotainment system, touchscreens on rear door pads, automatic doors and a new crystal-like effect for the dashboard. The biggest highlight has to be the optional roof-mounted 31.3-inch, 8K 'cinema' screen.

It also gets a plethora of powertrain options including mild-hybrid petrol and diesel engines, and even a plug-in hybrid petrol. India is likely to get a 299hp, 3.0-litre inline-six diesel (730d), the 380hp, 3.0-litre inline-six petrol (740i) and the 543hp, 4.4-litre twin-turbo V8 engine (M760i) – replacing the 609hp, 6.6-litre V12 engine on the outgoing 7 Series. All these engines come with 48V mild-hybrid tech and all-wheel drive as standard. Notably, the new 7 Series does not have a short wheelbase version and comes in long wheelbase guise as standard.

The new i7 sedan is essentially an all-electric version of the ICE-powered 7 Series – just as the all-electric i4 that’s on sale in India is based on the ICE-powered 4 Series. The new i7 is underpinned by the same CLAR architecture as the 7 Series and looks near identical to the regular sedan save for the electric blue highlights on the outside and a prominent ‘i’ badging on the grille to mark it out as the all-electric model. The interior is also largely the same, including the rear cinema screen.

The i7 draws its power from a 101.7kWh lithium-ion battery mounted within the floor pan that gives it a claimed range of 590-625km on the WLTP test cycle. In xDrive 60 spec, which is the version that’s expected to come to India, the i7 produces a combined output of 544hp from two electric motors mounted on each axle. BMW claims the i7 can be charged with speeds up to 195kW on compatible DC chargers, where a 6-minute charge can add 100km to the range. 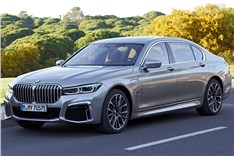 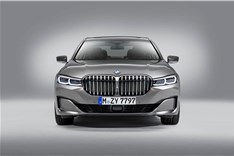 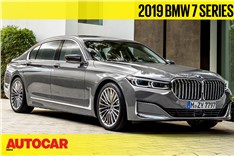