BMW i4 review: Will lure you away from petrol, diesel luxury sedans

The 3 Series-sized, 5 Series-priced all-electric BMW promises much. Does it deliver? 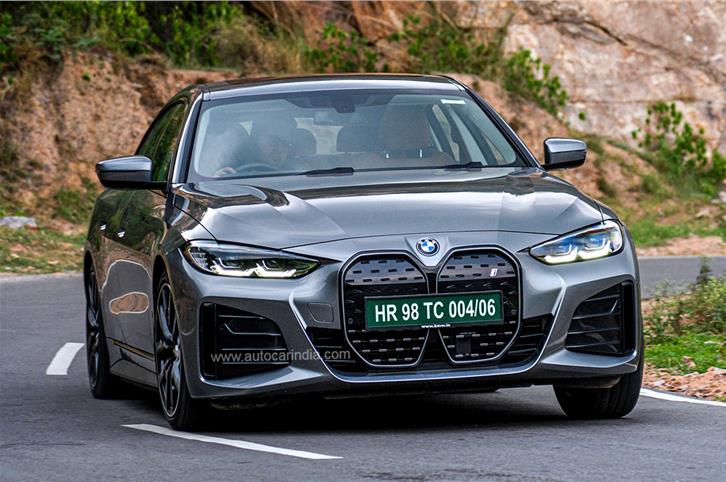 Our first look preview of the very interesting all-electric BMW i4 in the June 2022 issue of the Autocar India magazine ended on a ‘to be continued…’ note. The i4 has the classic BMW ingredients of a low slung form – strong motor and rear-wheel drive – but a verdict couldn’t be delivered without a proper drive. Having driven it now, I can tell you the news is good.

First, a quick recap of the car and its key details. The i4 is the all-electric derivative of the 4 Series Gran Coupe (not sold in India), which itself is the four-door coupe derivative of the 3 Series we’re familiar with. India gets the i4 in eDrive40 form with a rear-mounted motor driving the rear wheels. This electrically excited synchronous motor produces a strong 340hp and 430Nm, enabling a claimed 0-100kph time of 5.7sec. The motor draws power from an 83.9kWh lithium-ion battery pack under the floor. Said battery pack enables a range of 590km on the WLTP cycle, which is the highest among EVs on sale in India at the moment. But let’s not get lost in facts and figures. Let’s talk driving feel.

BMW i4: driving and performance

Of course, what gets you first in an i4 is engine sound, or the lack of it. A synthesised note on ‘ignition’ tells you it’s all systems go, aside from which the i4 is so quiet inside, it makes a 320d sound utilitarian. Ambient noises are also kept out well, and on the move you’ll hear just some tyre noise. And it’s not just quiet, but soothing to drive too, thanks to a smooth build of power, pleasant weight at the steering and nicely tuned regen braking. You can shuffle between the different levels of regen with B mode (selectable via the gear lever), unlocking strongest retardation and single-pedal driving. What also gets my attention is ride comfort. 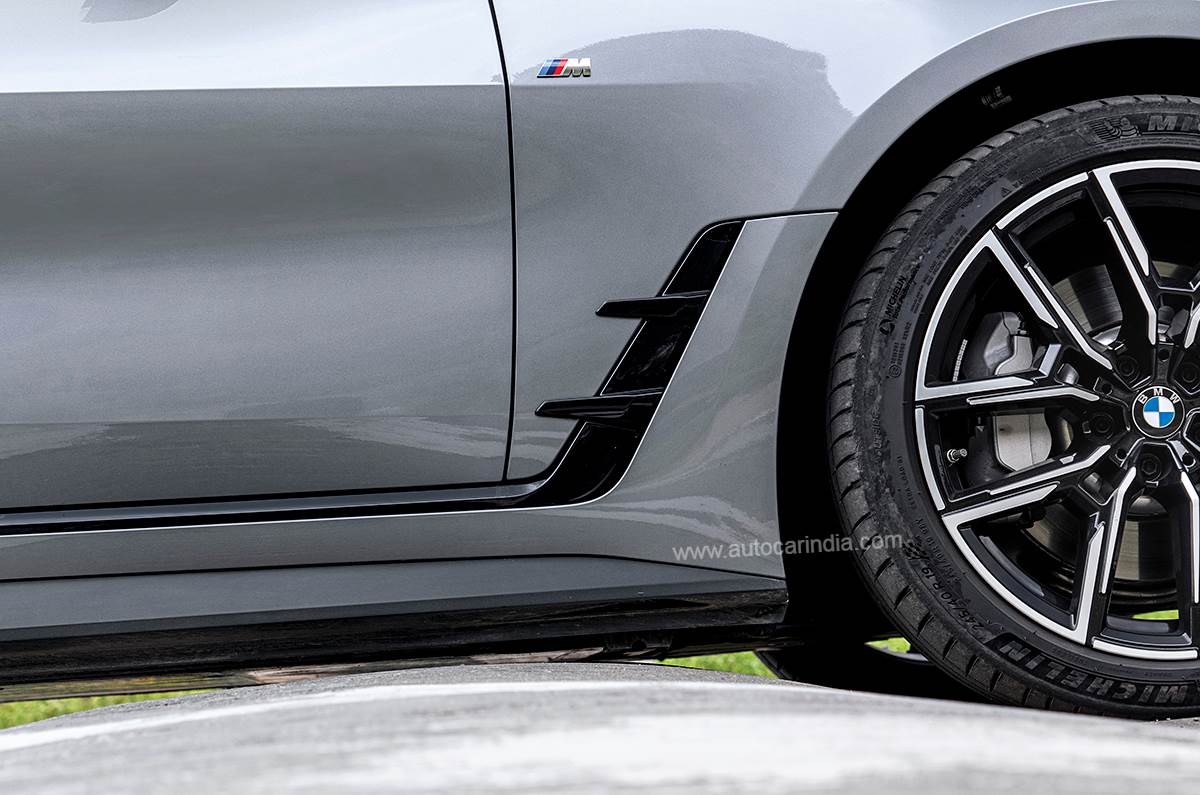 Damping is really well judged and the tyres round off the bumps ably. Trouble is, there’s only a sportscar-like 125mm of ground clearance and that means a slow crawl and deft manoeuvring on the large speed breakers and broken stretches on my route. The i4 does get a rear axle air suspension, but ride height can’t be altered.

It’s on the empty, winding section of road outside city limits that the i4 gets to exhibit its sporty side. Exploratory dabs on the accelerator result in an EV-typical immediate response, but what helps work a rhythm with the car is that all the power feels usable. The i4 eDrive40 isn’t overendowed and that’s a good thing. There’s a progression to throttle response that feels natural and you’ll appreciate that the i4 gives its all only when you want it to. Make no mistake though, because the i4 is brisk and the ready power is exciting. 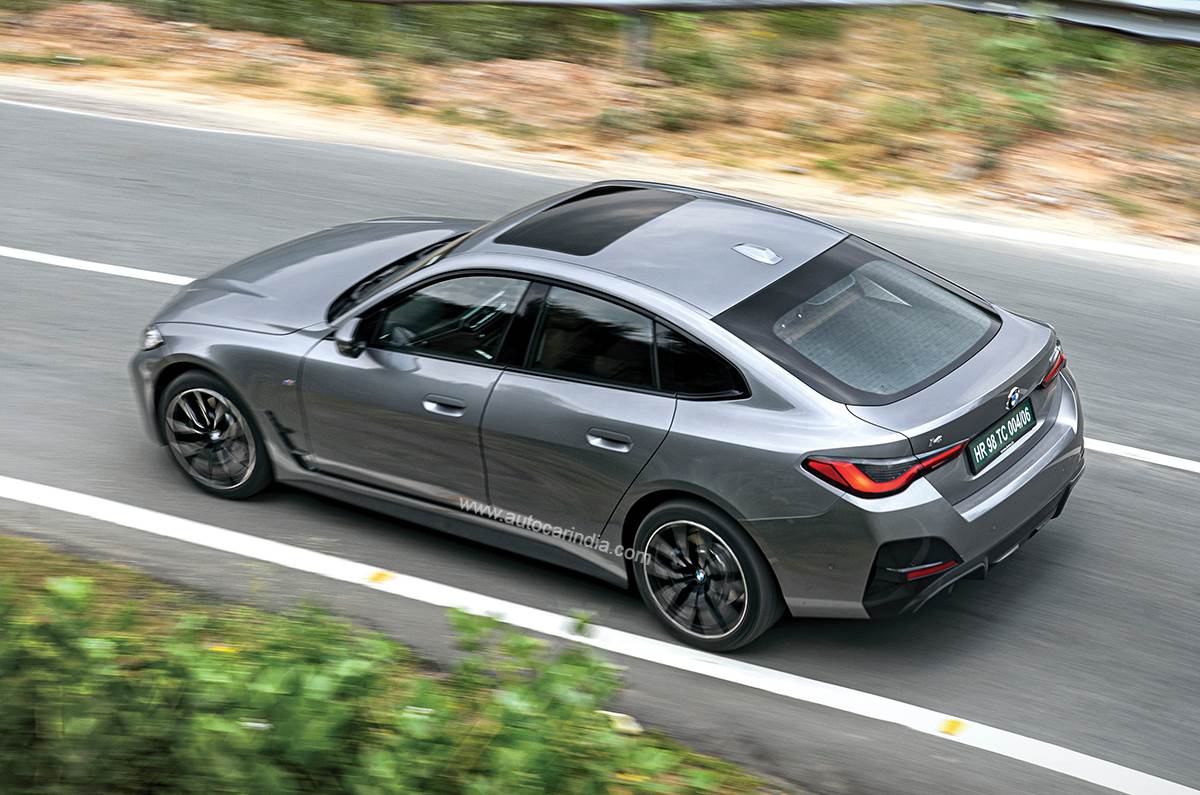 Ample range means you can make it to and enjoy your favourite driving roads.

The other happy takeaway is that the i4 handles like a BMW should. It weighs 500kg more than a 330i, so my apprehensions weren’t unfounded. Sure, it’s not as pointy as BMW’s finest, but the i4 feels agile, turns in keenly and successfully masks its weight around corners. The low position of the heavy battery has a role to play here, granting the i4 a lower centre of gravity than a 3 Series. 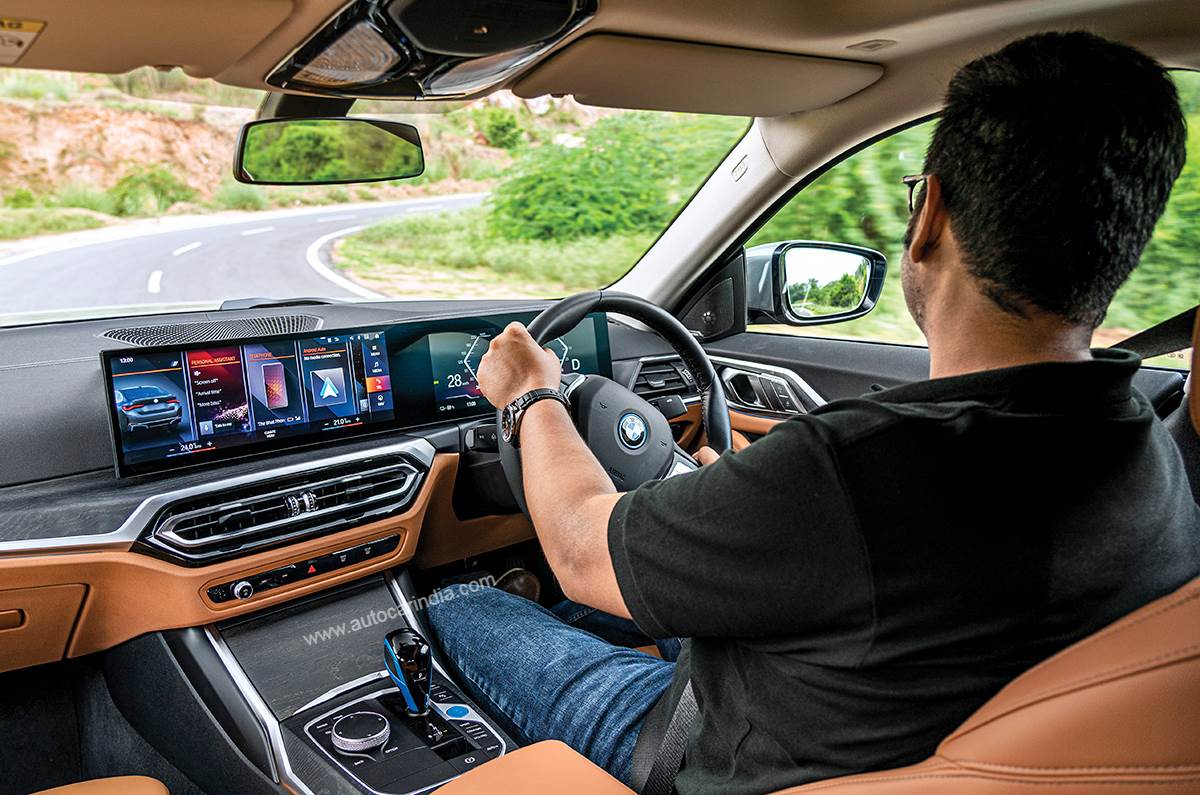 Cabin has much in common with 3 Series. Low set seating is sporty.

There’s great feel and connect at the steering too, and keen drivers will really take to the on-throttle adjustability that only rear-wheel drive gets you. And with regen, steering and motor modes, you can fine-tune the experience to your liking. The i4 isn’t just fun to drive as electric cars go. It’s fun to drive. Period. 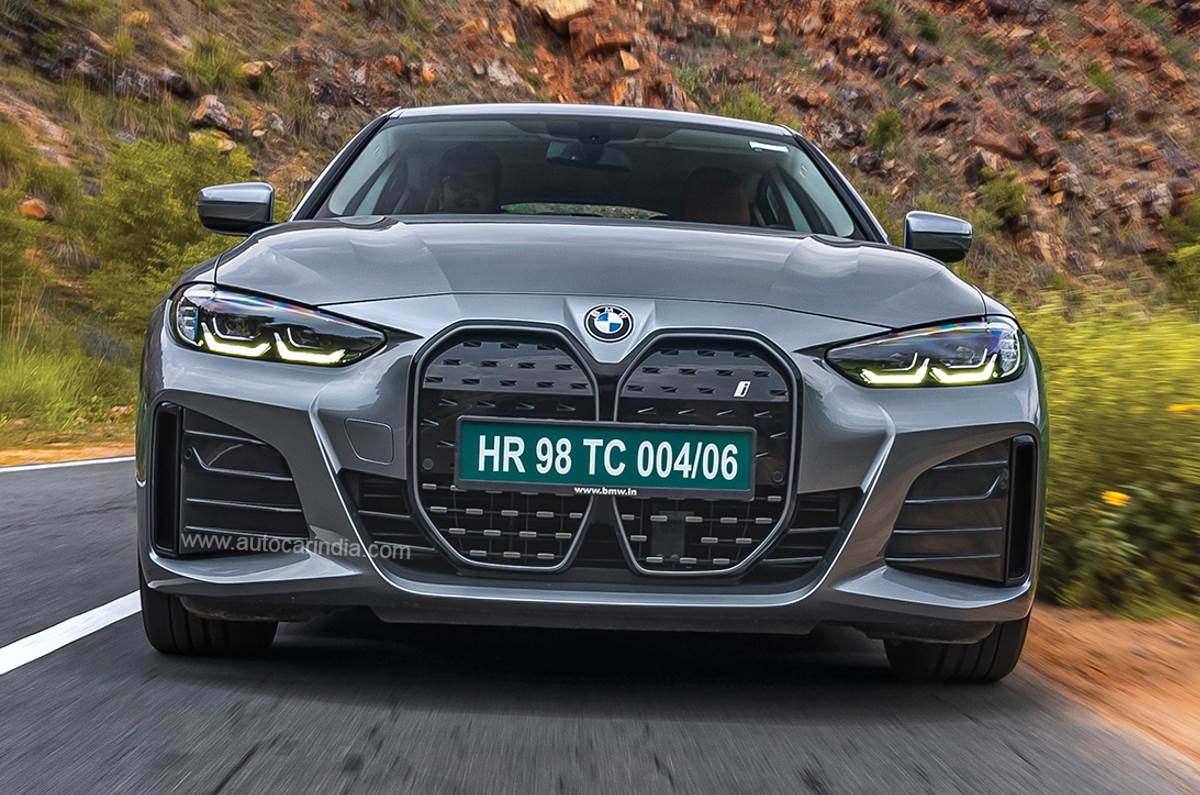 In most other ways, the BMW i4 isn’t all too different from its combustion engine equivalent. That’s largely because the i4 is built on the same platform rather than on a dedicated EV skateboard architecture. So, no space-efficient gawky cab forward look here. This is a classic, long bonneted BMW sedan with the added glamour of a flowing roofline, frameless windows and a high deck boot. Our test car is further embellished with the optional M Performance kit that brings in stylised bumpers and more attractive 18-inch rims; 17-inchers are standard. 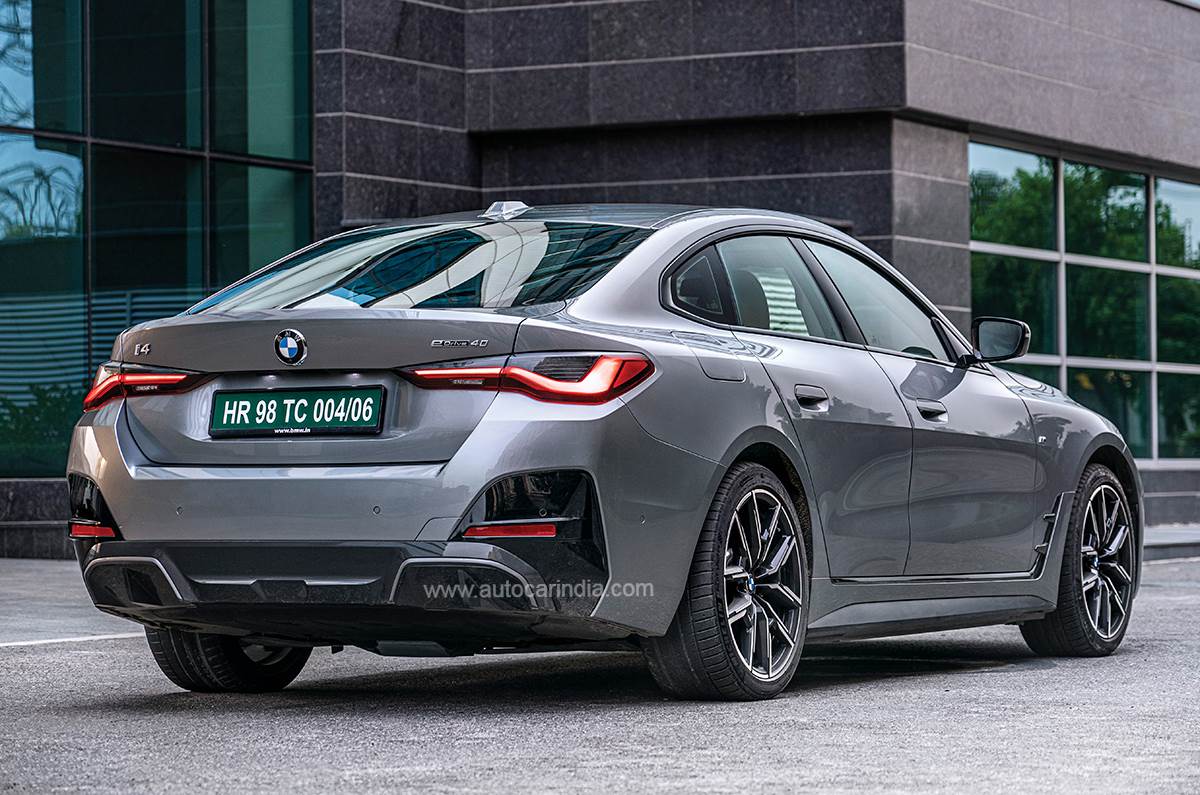 The front end is polarising, but the rest of the car is sexy. M Performance kit helps the look.

As for the elephant in the room that is the bucktoothed look up front, the oversized kidney grille is shouty and aggressive, but looks better in the metal than it does in photos. To some extent, that is. What’s not visible in photos is that much of the grille is closed off with active flaps at the bottom. These flaps open in 10 stages, depending on powertrain and battery cooling requirements.

BMW i4: interior and features

Inside, a blue surround for the BMW logo on the steering, a blue-hued start button and blue detailing on the gear lever are subtle cues to tell you that this is an EV. But the overall feel is of being in an updated 3 Series. In fact, the i4 previews the 2023 3 Series facelift’s interior. Chief among the changes is BMW’s Curved Display that comprises a 14.9-inch centre touchscreen that flows into 12.3-inch digital dials. The free-standing screens and that single-piece look give the interior a very fresh vibe. 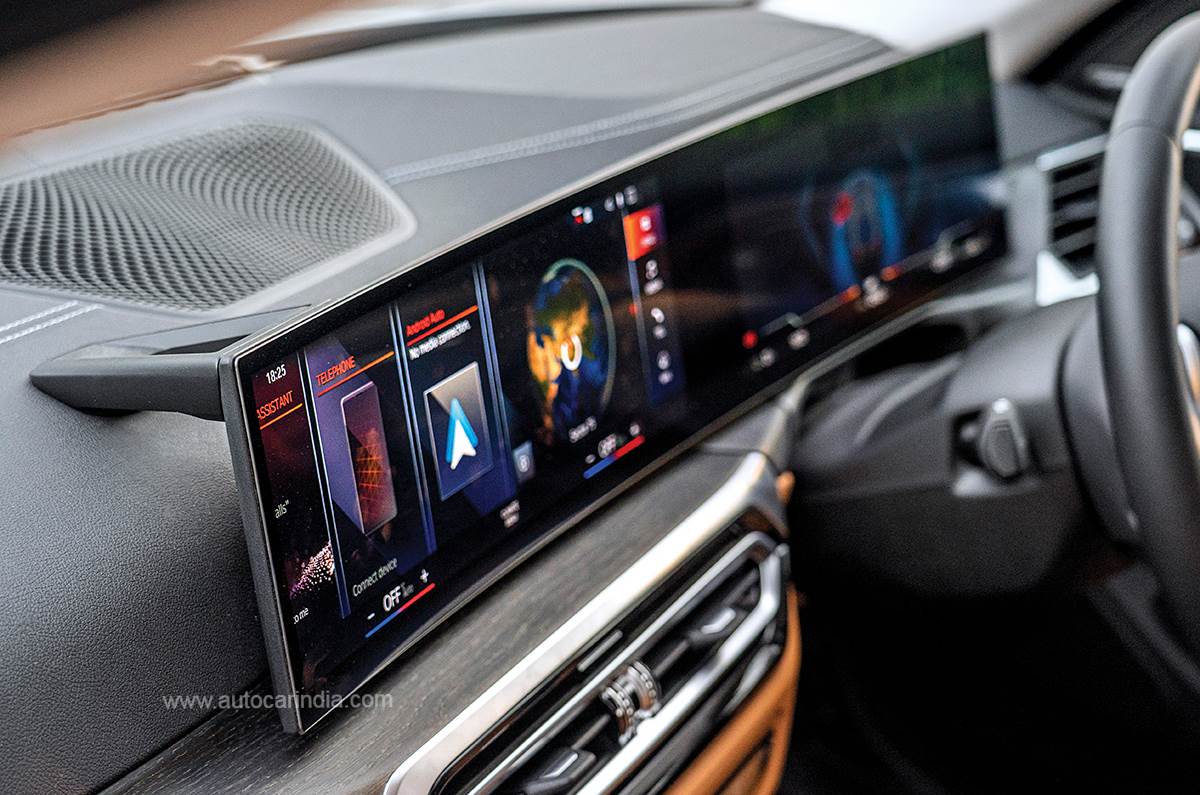 Sleek Curved Display is coming to 3 Series next year.

The touchscreen is iPad-like in its resolution and responses, and there’s a rotary controller too for easy access. What’s an irritant is that physical buttons for the climate control have been done away with and all settings are via the screen. You could try your luck with the voice assistant, but the system often trips on Indian accents. The digital dials that change theme with driving modes are vibrant, and what’s nice is that the high-contrast display is legible even under direct sunlight.

Cabin quality is impressive, as you’d expect, with the open pore wood elements and synthetic leather upholstery lending the interior a welcoming ambience. The front sport seats also give all the support that you’d need. 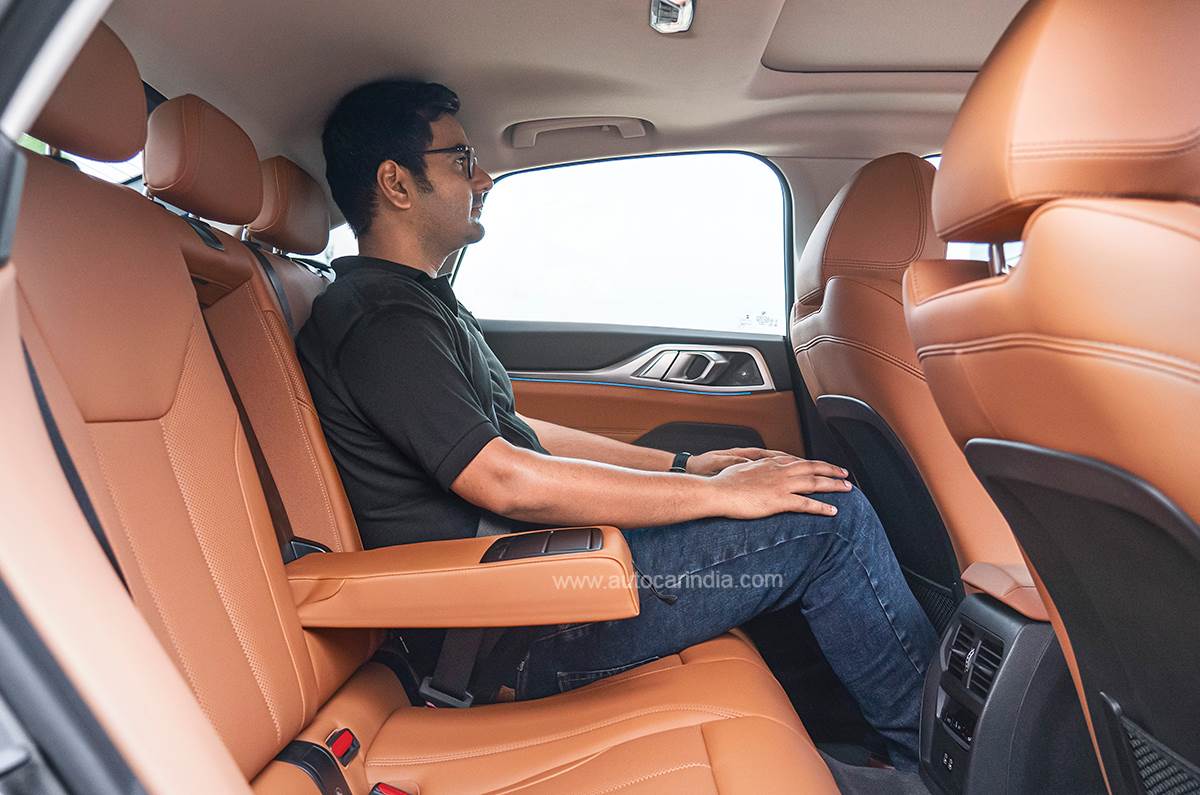 Rear section of cabin is cosy, not roomy.

Where the i4’s case weakens is when you give due weightage to the rear seat. Due to the low roofline and high centre tunnel (a remnant of the ICE platform), the rear section of the cabin is best described as cosy. There is good knee room, but the underfloor position of the battery pack results in a knees-up posture. Of the other things, the powered rear hatch lifts to reveal a reasonable 470 litres, though a spare tyre would eat up much of the usable space here. 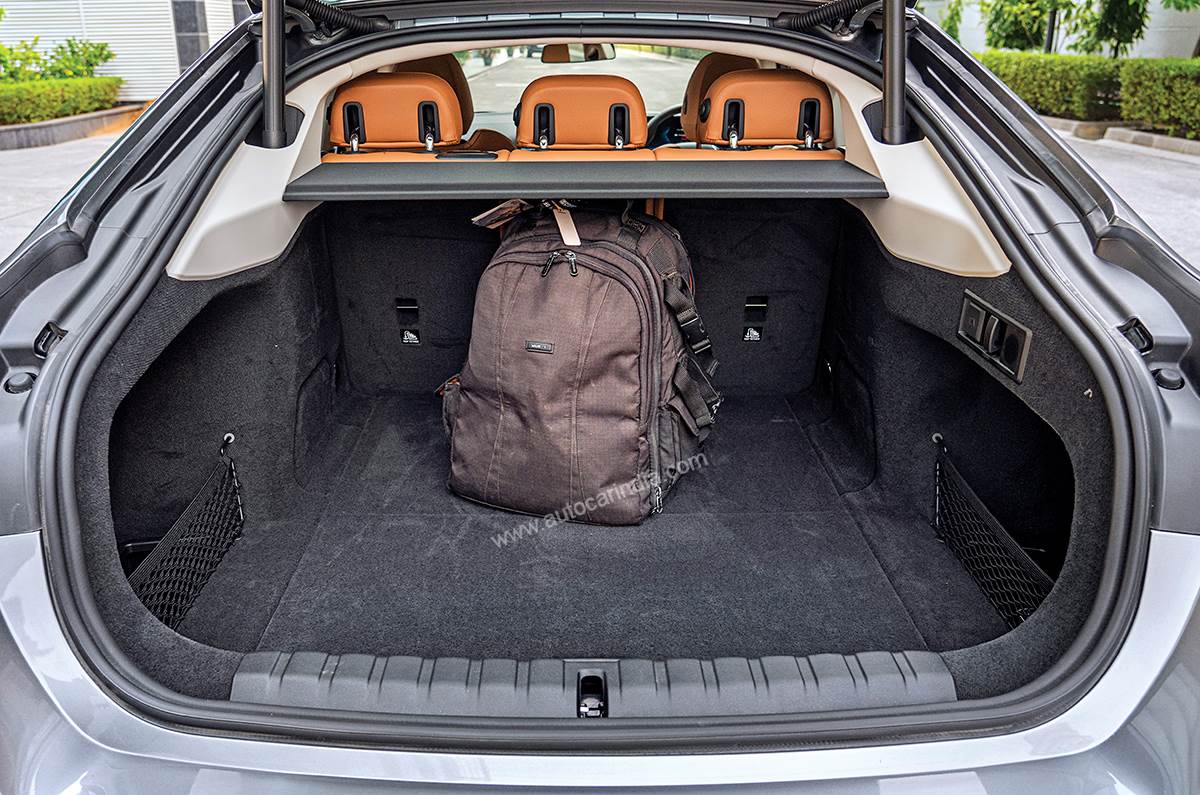 Features-wise, the i4 gets LED headlights, ambient lighting, three-zone climate control, sunroof, powered steering adjust, powered seats with driver seat memory, a 17-speaker Harmon Kardon sound system and a reversing assistant. There’s no 360-degree camera and keyless entry is also missed. The i4 doesn’t get ADAS features in India, but the body shell was found stable in Euro NCAP’s crash tests that earned the BMW a 4-star rating.

BMW i4: price and verdict

There are multiple ways to juice the i4’s battery pack, though an 11kW AC wallbox (0-100 percent takes 8.5 hours) supplied with the car will likely be the go-to choice for most owners. The i4 can be charged at up to 205kW, but in the near future, it’s the more common 25kW DC chargers that owners in India will have to plug in to. Thing is, with a 590km WLTP range or real-world range upwards of 400km, the promise is dedicated stops to charge would be restricted to long-distance drives alone.

The ease with which the i4 can fit into your life is one among many draws here. The biggest pull, however, comes courtesy of a tempting price tag. That Rs 69.9 lakh (ex-showroom, India), price puts the i4 in the same price band as the sporty M340i and larger 5 Series. At a time when green number plates are in, the powerful, fun and stylish i4 will sure get a lot of people going electric.