We take a closer look at the types of hybrids that you can buy and how they work. 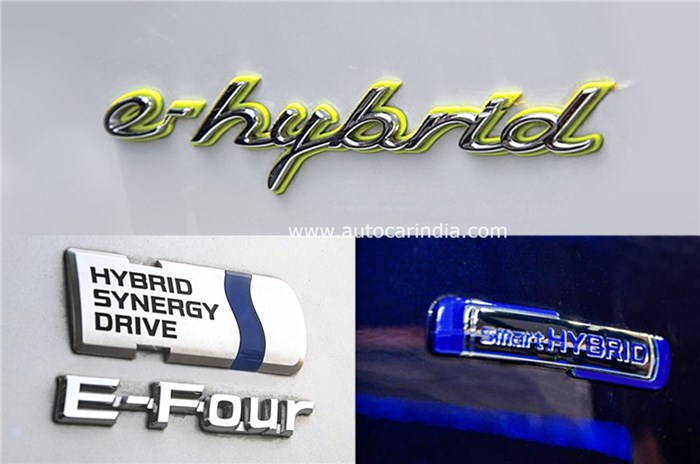 With uncertainty over fuel prices coupled with growing pressure to go green, mass-market car manufacturers are increasingly looking at ways to make their cars more efficient. For some brands like Tata Motors and Mahindra, going full electric is the answer, but with charging infrastructure still not widespread and concerns over an EV’s real-world range, carmakers like Toyota, Maruti Suzuki and Honda are approaching the EV game cautiously in India, first exploring the hybrid technology.

Hybrid technology has not traditionally been popular in India. Some of the reasons for it include the high upfront cost of buying a hybrid, and lack of government subsidies for this tech, and and because some see it to be not as green as pure electric as it still relies on internal combustion. However, Maruti and Toyota are betting big on hybrid tech.

But what is this technology? To put simply, hybrid electric vehicles have two sources for motive power – an internal combustion engine and an electric drivetrain. Working as a bridge between ICE models and going full electric, hybrids can be further categorised based on the level of electrification that they provide. Here are the different types of hybrid models that are available.

Mild hybrid vehicles are propelled via an engine as well as an electric motor, however, the vehicle cannot run solely on electric power. Like the name suggests, mild hybrids are not capable of doing the heavy lifting; it can assist the engine by providing short bursts of torque. While regenerative braking and auto start/stop help in improving fuel efficiency, this tech does not offer comparable levels of fuel economy and emission reductions as strong hybrids.

In India, Maruti Suzuki introduced mild hybrids in 2015 when it launched the Ciaz diesel with SHVS (Smart Hybrid Vehicle by Suzuki). The carmaker has since added this feature to many more of its models, like the Ertiga, XL6, the new Brezza, and the upcoming Grand Vitara (and its Toyota sibling, the Urban Cruiser Hyryder).

In fact, some luxury brands are, too, rolling out mild hybrid models in India. The new Mercedes-Benz C-Class gets mild-hybrid tech as standard across the range, while Volvo and Audi are also offering cars with mild-hybrid technology in India.

Some manufacturers use the term "Micro Hybrid" for a car's start/stop feature. However, since the battery does not aid in driving the vehicle, it is not really a hybrid and only a marketing gimmick.

Strong hybrid vehicles consist of a combustion engine and an electric motor that work together as well as independent of each other. The electric motor can power the car in certain scenarios like low-speed city driving, but when the driver demands more pace, the engine comes to life. The shuffling between the engine and electric motor is decided by the set-up itself, and it helps in leveraging excellent fuel efficiency figures.

The first strong hybrid to come to India was the Honda Civic Hybrid in 2008. Today, there aren’t many strong or full hybrid models that you can buy in India and the options available belong to the premium or luxury segment. The Toyota Camry is an example, while almost the entire Lexus range consists of full hybrid models.

However, this technology is slowly trickling down to the mass segments – Honda recently launched the City Hybrid, and the Toyota Hyryder and the Maruti Grand Vitara midsize SUVs will come with a strong hybrid powertrain, along with a mild hybrid unit.

As its name suggests, plug-in hybrid vehicles, in addition to being charged by the engine and regenerative braking, can be topped by simply plugging in. PHEVs can operate as electric vehicles in urban environments and drastically reduce tail-pipe emissions. How? Because they have a larger battery capacity, plug-ins typically offer an EV-only range of several kilometres, and in city driving, at low speeds, a PHEV may not even need the engine.

There are only a handful of cars that get the PHEV tech in India, including luxury SUVs like the Volvo XC90 and Porsche Cayenne, luxury sedans like the Porsche Panamera and even supercars like the Ferrari SF90 Stradale.

There are range extender hybrid vehicles too, which constitute an engine, battery pack and a motor. The engine only acts as a generator to top up the battery when required, while only the electric motor powers the wheels. The advantage here is that the engine can operate at its most efficient point since it isn't directly providing motive force. There are no extended range EVs available in India, but some models like the Nissan Qashqai sold internationally have this type of technology.

Which kind of hybrid do you think is the best for India? Let us know in the comments section.

Range extender is the best since it always runs on electric motor thus reducing combustion losses at all speeds.

Range extender is the best since it always runs on electric motor thus reducing combustion losses at all speeds.