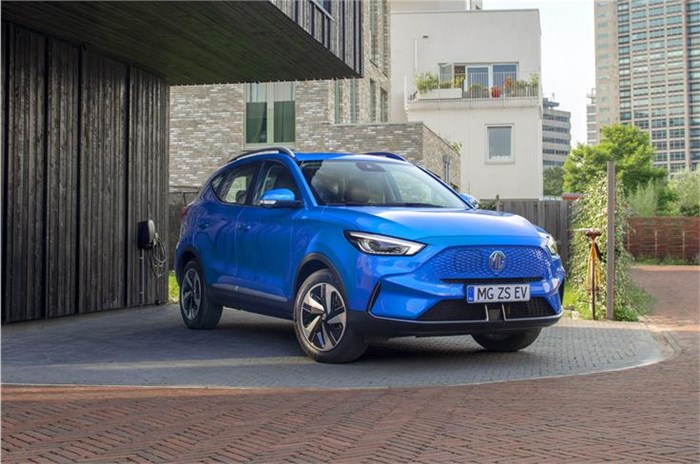 
MG Motor India will announce pricing for the heavily updated ZS EV SUV on March 7, 2022. The refreshed ZS EV gets comprehensive cosmetic updates and more features, along with a larger battery that will increase its claimed range. Bookings for the new MG ZS EV are currently underway, with deliveries slated to start later this month.

MG ZS EV facelift: what all will be new?

The facelifted ZS EV was globally revealed in October last year, and the new India-bound SUV looks more or less identical to the one sold overseas. The slimmer headlamps with new LED daytime running lamp signatures and LED tail-lamps, for instance, are identical to that of the Astor.
The ZS EV gets several EV-specific design touches. The most distinct of these is a new body-coloured, blanked-off frontal section that replaces the traditional grille. While the charging port is still housed in this grille area, it's not behind the MG logo but neatly hidden on the side. The front and rear bumpers are new for the EV as well and get sporty detailing. It also gets a unique design for the 17-inch alloy wheels.

There aren’t as many cosmetic updates on the inside of the new ZS EV, although it gets a new faux carbon-fibre trim around the dashboard. The climate control buttons have also been revised and are now similar to those in the Astor.
The new ZS EV sees major additions as far as equipment goes. It now gets a new 10.1-inch touchscreen infotainment system, in place of the older 8.0-inch unit, and a new 7.0-inch digital instrument cluster replacing the analogue dials. Additionally, it also gets ADAS functionality and a 360-degree camera. For the ADAS system, the ZS EV uses a similar camera and radar set-up as on the Astor.

The biggest update on the ZS EV facelift is under the skin. The previous 44.5kWh battery pack has been swapped with a larger 51kWh unit, which will result in increased driving range. The ZS EV continues to be powered by a front-axle-mounted electric motor that produces 143hp and 353Nm, which means power and torque figures will be identical to the outgoing model.

The new ZS EV will command more premium than the Tata Nexon EV, although the latter will also be updated with a larger battery soon, thus being able to close the gap in terms of range and performance. It will also rival the upcoming Hyundai Kona electric facelift.
Also See: