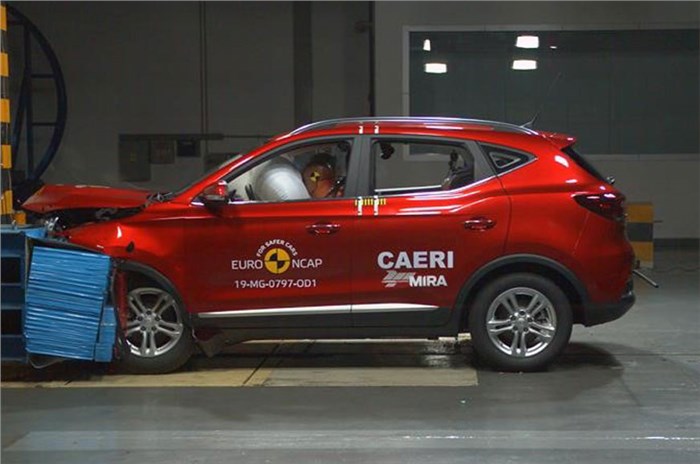 Euro NCAP has announced the results of its last round of tests for 2019, which included cars like the Audi Q8, Ford Puma, MG ZS EV and more. The ZS EV has managed to secure a five-star Euro NCAP rating – which is the maximum possible rating.

The Euro NCAP rating applies to both variants of the MG ZS EV – the Excite and Exclusive – which are offered with one battery pack (a 44.5kWh unit) in the UK and European markets. The adult occupancy rating on the ZS EV was 90 percent (scoring 34.5 out of 38 points), child occupancy safety rating was 85 percent (41.7 of 49 points), the vulnerable road users rating was 64 percent (31 of 48 points), while it scored 70 percent (9.2 of 13 points) in the safety assist system category.

The safety equipment on offer on the EV tested includes six airbags, seatbelt pretensioners with load limiters, speed assist, lane keep assist and Autonomous Emergency Braking (AEB) for pedestrians and cyclists in both city and inter-urban settings, as standard. It is worth noting that the model headed to India won’t be equipped with the AEB or lane keep assist systems.

MG has already revealed the India-spec ZS EV, which comes with a 44.5kWh, liquid-cooled lithium-ion battery, with an IP67 rating. Once launched in early 2020, the MG ZS EV will initially only be sold in five cities – namely Delhi-NCR, Mumbai, Hyderabad, Bengaluru and Ahmedabad. MG’s electric SUV will rival the Hyundai Kona Electric when it arrives.