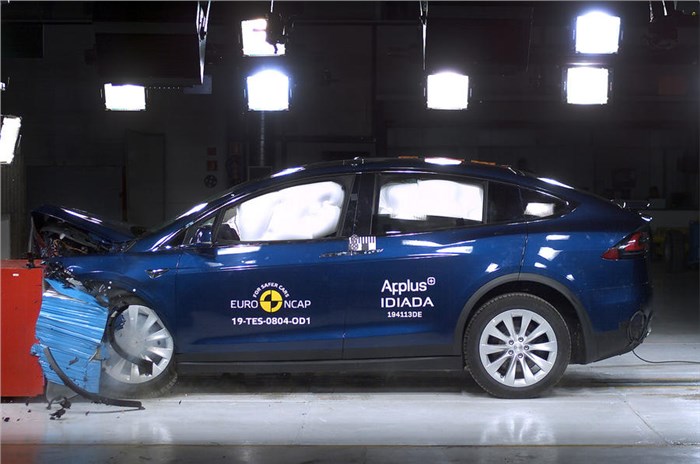 In the latest round of Euro NCAP crash tests, the Tesla Model X has been awarded a full 5-star rating. The testing agency also praised the electric SUV’s autonomous emergency braking system, claiming that collisions were “avoided or mitigated in most cases”.

Moving to child occupant protection, the Model X was awarded a rating of 81 percent. The SUV offered good protection to the 10-year-old child dummy in most cases, with the agency finding neck protection to be poor in case of a frontal impact. The 6-year-old dummy used fared much better with good protection all throughout. Euro NCAP, however, noted that there wasn’t enough space to install a universal child restraint in the third row with the middle row in its normal position.

Pedestrian safety was rated at a much lower 72 percent. It was noted that while the car’s active deployable bonnet offered between good to adequate protection in case of a collision, with a pedestrian, the protection to the pelvis was poor. The Model X's autonomous systems were lauded and were awarded the maximum number of points. The Tesla Model X also scored highly for its safety systems, with an overall rating of 94 percent or 12.3 points out of 13.

The Model X is the second Tesla model to be tested by Euro NCAP in 2019, after the Model 3 that was tested earlier in the year. The Model 3 earned a 5-star rating as well.