MG will launch an affordable EV - the E230 - next year, and has plans to secure funding to expand its plant and develop a range of 5-6 EVs by 2030. 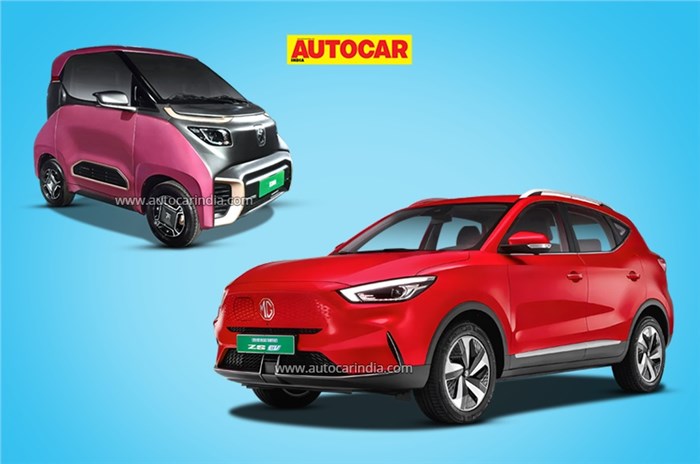 MG Motor India recently updated the ZS EV, and its next launch, slated for early 2023, is also set to be an electric vehicle. As we have exclusively reported, the said model will be the MG E230 – an affordable, two-door EV – aimed at the mass market segment. Commenting on volume expectations from the two models, Rajeev Chaba, president and managing director, MG Motor India, told Autocar India in an interview, “Next year, we will get 25 percent of our (total) sales from these two EVs – the ZS EV and the new EV, which is still on the drawing board and we are preparing to launch it.”

MG managed to retail 2,296 units of the pre-facelift ZS EV in the January-December 2021 period, translating into average monthly volumes of about 191 units. This makes it the second bestselling electric SUV in the country, albeit far behind the Nexon EV.

“We definitely expect to ramp up volumes with the new model,” said Chaba. “From May or June onwards, we will start supplying 500 ZS EVs a month. Then, from September, we can do 700-800 units a month, and in the first quarter of next year, we can strive for 1,000 units a month.”

As such, the company boss said that MG is aiming to retail 6,000 units of the ZS EV this year, and then ramp up the volumes to 10,000 units in the next full year.

Though MG remains confident of its recently upgraded model, most of the action in the EV segment, for now, seems to be in the Rs 15 lakh region, where the Tata Nexon EV is positioned. In comparison, the ZS EV is priced at Rs 21.99 lakh-25.88 lakh (ex-showroom, India). Still, Chaba believes that supply constraint is the major issue, not the demand. “Our demand is very solid – we get 700 orders (for the ZS EV) a month. So actually, we are almost booked for the year.”

Moreover, MG is working on ramping up its plant in Halol, Gujarat. Though the production capacity of the plant, across all model lines, was initially pegged at 80,000 units per year, it will be increased to 1,20,000 cars from next year, commented Chaba.

EV sales have shot up in recent times, but they are still a fraction of combustion engine car volumes, primarily because EVs are expensive to purchase. Commenting on when the Indian auto industry could reach the tipping point for EVs to go mainstream, Chaba said that it’ll happen with battery electric models achieving a sub-Rs 10 lakh price point. He further added, “In my opinion, the price can further go down to Rs 6 lakh-7 lakh in the future, when a lot of the components are available locally. Battery manufacturing in India, under the government’s PLI (production linked incentive) scheme, will also play a crucial part in reaching the competitive price tag, but it will take five years, at least.”

Elaborating on his projections, Chaba said that an EV positioned in the Rs 6 lakh-7 lakh category will have a hatchback sort of a form factor, and pack in 100-150km of range – sufficient for the urban grind. “So that's the kind of solution I can look at.”

For reference, the Tata Tigor EV, priced at Rs 11.99 lakh-13.14 lakh (ex-showroom, India), is currently the most affordable electric car for private buyers.

Last year, MG had announced that its upcoming, affordable EV will be positioned in the Rs 10 lakh-15 lakh range, though we expect MG to have a surprise in store when it comes to the final pricing, which will be well below Rs 10 lakh.

Moreover, MG India’s electrification plans aren’t limited to just the ZS and E230. The company is planning a salvo of 5-6 EVs in total, by 2030. For this, the automaker will need considerable investments.

MG to set up standalone EV entity, to be funded by private equity investors

MG India is plotting a major EV offensive, which hinges on a separate EV entity the company is planning to set up. The carmaker is looking for external investment to the tune of US $400 million-500 million (Rs 3,000 crore-3,800 crore) in the new subsidiary, to fund the development of a raft of new EVs for the Indian market.

With valuations of EV companies going through the roof, traditional auto companies are looking at hiving off their EV divisions to raise capital at astronomical valuations. In India, this trend was started by Tata Motors, which secured a USD 1 billion (Rs 7,500 crore) investment, in exchange for a stake of 11-15 percent in its dedicated EV arm, translating into a unexpectedly high valuation of USD 9.1 billion (Rs 68,250 crore).

As per company insiders, MG Motor India is already in talks with several private equity investors and believes the first round of funding could value the new entity at a mind boggling $15 billion-20 billion (Rs 1,12,500 crore-1,50,000 crore), given the dominance of parent SAIC in the EV space.

Unlike Tata Motors, which has to develop its products and technology in-house, MG India has access to a wide range of EVs already developed for the Chinese market, which includes the country’s top-selling EV – the Wuling Hongguang Mini. Battery technology is another area where SAIC has significant advantage given its partnership with CATL, one of the largest battery makers in the world.

In fact, MG India has applied for the government’s production-linked incentive scheme (PLI) which aims to incentivise EV manufacturing in the country. However, even if MG India gets PLI approval, it still needs FDI (foreign direct investment) approval, which is proving to be a challenge, and the other reason why MG India has taken the private equity route for its new venture. MG India’s expansion plans have hit a roadblock because approvals for direct investment from Chinese firms are stuck after clashes on the India-China border.

Chaba, however, was non-committal. “Right now, I am not at the liberty to talk about the details. But what I can say is that we are definitely looking at expanding our plant, and launching more and more EVs. So we need funds for that, for sure, and we are looking at all the possible options, including credit lines, funding, FDI approvals, and so on.”

What do you think about MG’s target of EVs accounting for a fourth of its sales from next year? Let us know in the comments below.