MG Hector Plus production begins ahead of July launch

The three-row Hector Plus SUV comes with captain’s chairs in middle row; to be manufactured at MG’s Halol facility in Gujarat. 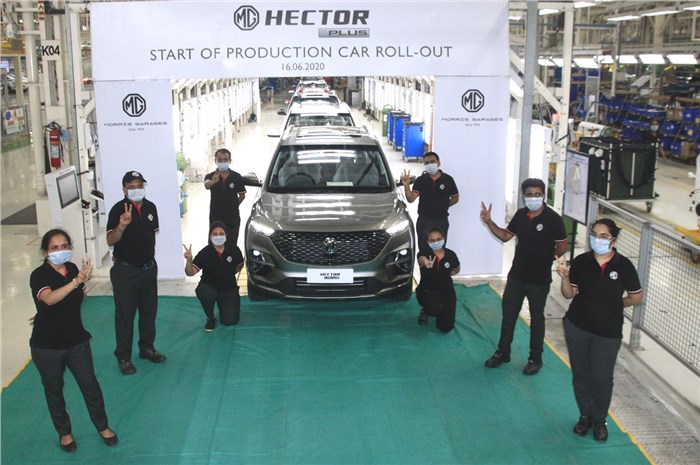 MG Motor India has just announced that it has started production of its latest offering – the Hector Plus – at its Halol manufacturing facility in Gujarat. The model will go on sale in our market in July.

What is the MG Hector Plus?

The Hector Plus was first showcased at the 2020 Auto Expo and is essentially a version of the Hector SUV with three rows of seating. While the model shares its platforms, engines and many body panels with the standard Hector, it is marginally longer due to its new front and rear bumpers. It also gets new headlights and tail-lights to further distinguish it from the two-row Hector.

What engines will the Hector Plus come with?

What features will the Hector Plus get?

The biggest new feature will be the option of captain’s chairs in the second row with the 6-seat configuration. A point to note is that in some international markets, derivatives of the Hector Plus also get a 7-seat configuration, which may come to India a little later. Besides this, the Hector Plus’ cabin is expected to get some minor cosmetic tweaks and an updated version of the 10.4-inch touchscreen infotainment system. MG's in-car connectivity suite and a panoramic roof will also be part of the package.

Which models will the MG Hector Plus rival?

In terms of rivals, the Hector Plus will face competition from the Mahindra XUV500 and the upcoming Tata Gravitas. Though, as we had previously reported, MG will also aim to take on the Toyota Innova Crysta by offering a lower price tag and a longer warranty. Further down the line, the 7-seat version of the new Hyundai Creta will also enter the mix, once it is launched in the second-half of 2021.