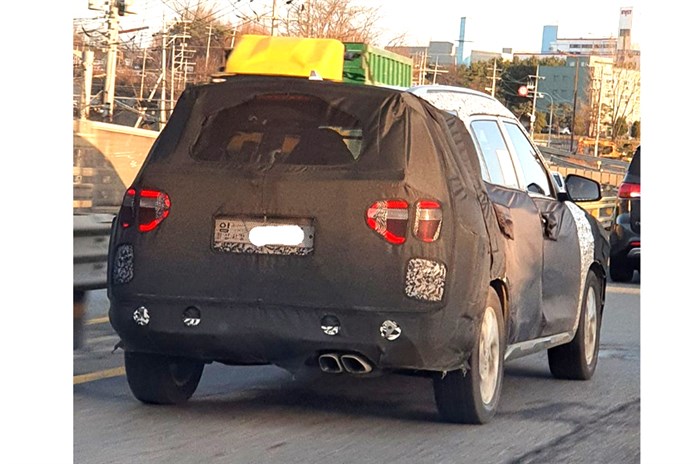 It is no secret that Hyundai is readying a 7-seat version of the new-gen Creta midsize SUV that was recently launched in India. A first spy shot that surfaced recently confirmed that the model will get minor styling tweaks, along with some structural changes; and today we bring you a new spy picture that shows the 7-seat Creta from the rear three-quarters.

The 7-seat Creta will share quite a few body panels with its 5-seat cousin. However, there are multiple structural differences as well, with the major one being the 7-seat version getting a completely new tailgate design, as seen in this spy picture. For the 7-seat Creta, Hyundai seems to have ditched the outlandish rear styling of the 5-seat version for a more conventional-looking design, replete with two much simpler-looking and large tail lamps that extend into the tailgate, making the SUV look wider than it actually is. Although it remains to be seen whether the 7-seat version will get the reflective strip in the centre. The tailgate of the three-row Creta itself looks more upright, in order to facilitate more room for its third-row passengers. The model will have a flatter roof design too, along with a decent-sized quarter glass positioned just aft of the rear door, which will make the 7-seat Creta look more like a smaller version of the Palisade SUV that is already on sale abroad.

While engine details are not yet known, we expect the new Creta 7-seater to come with the same petrol (1.4-litre turbocharged and 1.5-litre naturally aspirated) and 1.5-litre diesel powertrain options as the 5-seat version in India. However, the model sold abroad will most likely come with a 1.6-litre turbo petrol or a 2.0-litre naturally aspirated petrol engine that is also offered on the Kia Seltos overseas.

The new 7-seat Hyundai  Creta will come to India soon. We expect the SUV to reach our shores only in the second half of 2021. The model will see stiff competition from the likes of the Tata Gravitas and the MG Hector Plus in the Indian market.