MG Hector Plus is a 6-seat, 3-row derivative of the standard Hector. 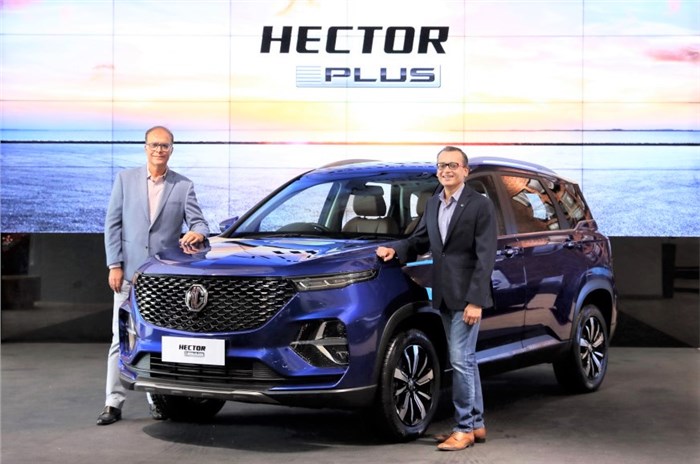 The 3-row MG Hector Plus has just been launched in our market, with introductory prices starting at Rs 13.49 lakh for the base petrol Super trim and going up to Rs 18.54 lakh for the top-spec Sharp diesel trim. MG already officially began accepting orders for the Hector Plus last week, with booking amount set at Rs 50,000. MG is positioning the new Hector Plus as an option for chauffeur-driven SUV buyers with captain’s chairs for the middle row being the talking point. The third row, as MG puts it, is intended ‘for teenagers’.

The Hector Plus is available in a total of eight versions, including four trims and four engine-gearbox combinations. The table below has version-wise prices:

Do note that these rae introductory prices and that they will increase from August 13 by about Rs 50,000.

Overall, Hector Plus prices are about Rs 65,000 more than equivalent versions of the 5-seat Hector.

There are a few differences outside including the reprofiled front and rear bumpers (which add 65mm to the Hector Plus’ length), redone headlight clusters and a new mesh design for the grille. MG Motor India offers the Hector Plus in six exterior colour options - Starry Sky Blue, Glaze Red, Burgundy Red, Starry Black, Candy White and Aurora Silver.

MG’s also provided other changes on the inside to help tell the two SUVs apart such as the tan brown leatherette upholstery, compared to the Hector’s all-black colour scheme.

In a nutshell, not by much. Like the 5-seat model, the Hector Plus gets a multi-function steering wheel, analogue instrument cluster with a 7.0-inch MID, 10.4-inch touchscreen with Apple CarPlay/Android Auto and connected vehicle tech, an Infinity audio system and ambient lighting  and a panoramic sunroof. The range-topping Hector Plus variant packs in LED headlamps and DRLs, heated wing mirrors, front and rear parking sensors and powered front seats. Safety features include six airbags, ABS, ESC, traction control, hill-hold assist, a tyre pressure monitor and a 360-degree camera.

The only difference in terms of kit is that the Hector Plus gets a hands-free opening function for the tailgate. The connected car tech has been given upgrades too such as the cheeky 'chitchat' feature.

What does the MG Hector Plus rival?

Considering the Hector Plus is a 3-row midsize SUV, its closest competitor is the Mahindra XUV500, though the upcoming Tata Gravitas will also be a rival when it is launched. MG also hopes to peg the Hector Plus as an alternative to the popular Toyota Innova Crysta, enticing buyers by being more affordable and coming with a longer standard warranty, under its MG Shield programme. Another rival to the 6-seat MG SUV will be the 7-seat version of the new Hyundai Creta, which is set to arrive in the second-half of 2021. 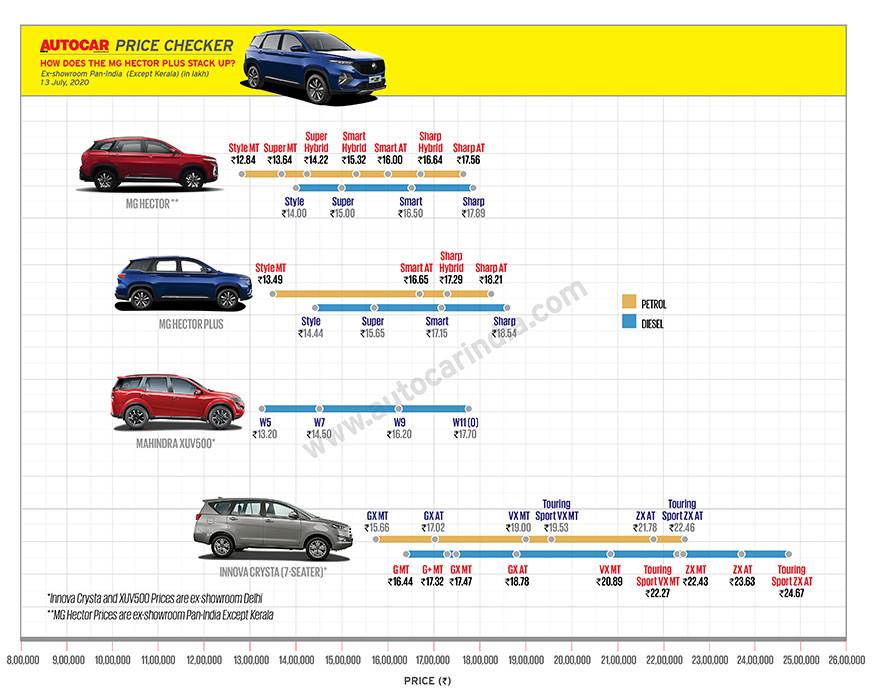