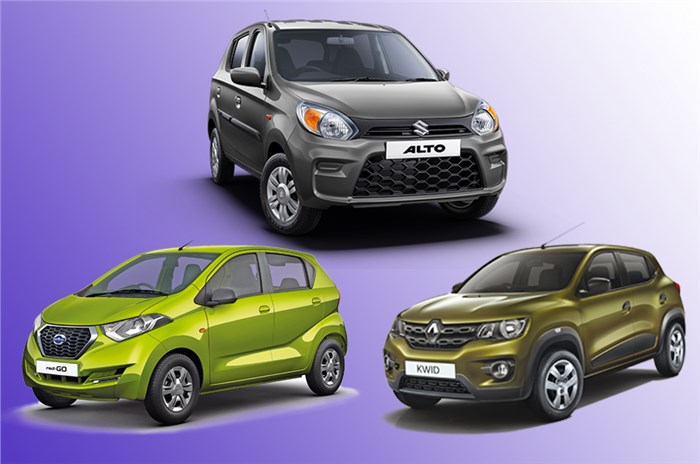 We compare the recently launched Alto facelift with the Renault Kwid and Datsun Redigo to see how it stacks up against its rivals, on paper, when it comes to price and fuel efficiency.

With the updated drivetrain, the Alto is the first car in the segment to be BS-VI-compliant. This update has, however, come with a price hike, as the new 800cc Alto is around Rs 22,000-28,000 more expensive than comparably-equipped variants of the outgoing model.

How does the new BS-VI-compliant Alto stack up against its rivals when it comes to price and fuel efficiency? We compare the new Alto to the Renault Kwid and Datsun Redigo, on paper, to find out.

We will be comparing the 0.8-litre engines on all these cars as the Alto 800 is only available with aforementioned engine. If we look at the power output, the Renault Kwid and Datsun Redigo produce 54hp and 72Nm of torque from their shared 799cc petrol engine. The new Alto 800 produces a more tame 48hp and 69Nm of torque from its BS-VI-compliant 796cc petrol engine. All three cars come paired with a 5-speed manual gearbox. From this group it is the Renault Kwid that posts the best mileage per litre figure (at 25.17kpl), followed by the Datsun Redigo (at 22.70kpl), and the new Alto 800 comes in last (with a marginally lower 22.05kpl).

It’s also worth noting that the new Alto 800 is only available with a 5-speed manual while both the Renault Kwid and Datsun Redigo are available with an AMT automatic gearbox option with their larger 1.0-ltre engines.

As the new Alto 800 is the only car with BS-VI-compliant engine in this comparison, it has seen an increase in its pricing for this feature. This translates to the Alto 800 being the most expensive in terms of the base variant (Rs 2.94 lakh), followed by the Renault Kwid base variant (Rs 2.72 lakh), and the cheapest among the three being the Datsun Redigo (Rs 2.68 lakh). Interestingly, at the top end, it is actually the Alto 800 that is the most affordable (Rs 3.72 lakh), with the Datsun Redigo being marginally more expensive (Rs 3.75 lakh) and the Renault Kwid actually being the priciest of the lot (Rs 3.90 lakh). Although, the new Alto 800 is no longer offered with the VXi (O) variant, which was the top end on the previous model.

Also worth mentioning is that the 2019 Alto 800 comes with the most safety features, and even in base versions, it can be had with a second airbag for a little more money. All Kwid variants get a driver airbag and ABS as standard but there’s no option for a passenger airbag. The Datsun Redigo has been upgraded with ABS recently but a driver airbag is only part of the kit on the top-spec S version. You can read a more detailed price comparison between the Maruti Suzuki Alto 800 vs rivals.