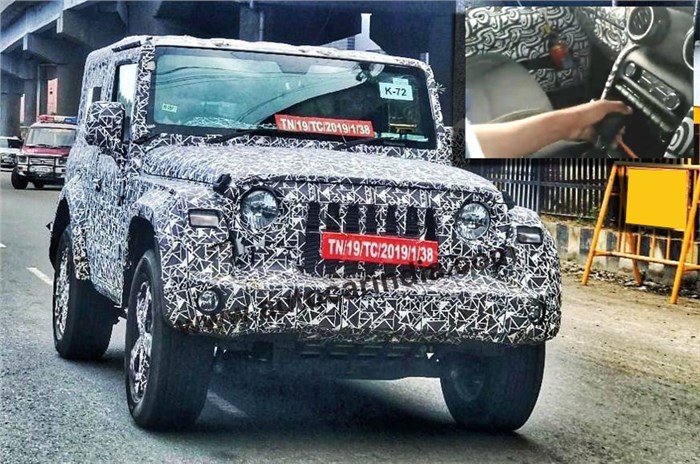 Mahindra has been rigorously testing the new Thar and the 4x4 version was spotted earlier. Now spy pictures reveal that a test mule of the diesel-automatic variant has been spotted for the first time.

As we had reported earlier, Mahindra has confirmed an automatic gearbox option for the new Thar in a bid to widen its appeal. And the shot of the gear lever tells us this is the automatic-equipped version of the Thar.

The new Thar will be powered by a BS6-compliant version of Mahindra’s 2.2-litre mHawk diesel engine which puts out around 140hp. The automatic option will be a 6-speed Aisin-sourced torque converter unit, while 6-speed manual gearbox will be offered as standard.

The new Thar will also come with a new 2.0-litre petrol unit from Mahindra's mStallion engine family, and it features direct injection as well as turbocharging. Gearbox options for the petrol will likely include 6-speed manuals and automatics. A four-wheel-drive system will be available with both engines.

In order to attract a wider audience, the new-gen Thar will feature more creature comforts than its predecessor. On the outside, the Thar SUV is likely to get 18-inch alloys, LED daytime running lights and power-folding mirrors. A factory-fitted, removable hard-top is also expected. Getting in, expect top-spec trims to feature a touchscreen infotainment system with Apple CarPlay and Android Auto compatibility, a colour multi-info display in the instrument cluster, a rear parking camera and multiple USB ports. Standard safety kit will include dual airbags, ABS and rear parking sensors.

Mahindra is expected to launch the new-generation Thar by September-October 2020. In terms of rivals, the new Thar will face competition from the revamped Force Gurkha and the upcoming 5-door Suzuki Jimny.