The production-spec model seems to have retained most of the design cues of the eXUV300 concept from two years ago. 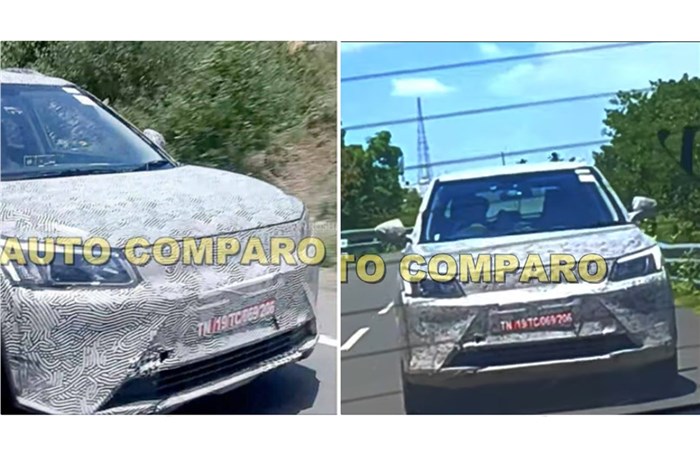 Mahindra has been testing the electric XUV400 for sometime now, and new spy shots have surfaced online that give us the clearest look of the upcoming SUV. Expected to hit the market sometime early in 2023, the XUV400 will be based on the ICE-powered XUV300.

At first glance, it’s clear that the production-spec XUV400 will carry over the design of the eXUV300 concept that was showcased over two years ago at Auto Expo 2020. It will be longer than 4 metres in length – around 4.2 metres – as the sub-4m rule for subsidy benefits are not applicable for electric vehicles. The XUV300, based on the SsangYong Tivoli sold abroad, was shortened in length to fit the compact SUV segment and be eligible for tax advantages.

As such, the electric XUV400 looks sufficiently differentiated form the XUV300. Up front, it features sleeker rectangular headlamps but misses out on the drop-down LED Daytime Running Lamp treatment seen on the other XUVs – instead, the LED DRLs are housed within the headlamp cluster. True to the concept, there’s a closed-off front grille and a sharply contoured front bumper with triangular fog lamp housings. What’s different is the central air intake on the bumper, which was a sealed panel on the eXUV300 concept.

In profile, the XUV400 boasts of a similar silhouette as the XUV300 with a similar glass house and character lines. It will, however, have better proportions, thanks to its longer length. It can also be seen riding on newer alloy wheels, possibly 17 inchers. At the rear, the car gets new wraparound tail-lamps and a reprofiled tail gate with a more pronounced license plate housing – again quite similar to the eXUV300 concept.

Details on the XUV400’s powertrain are currently scarce, but expect Mahindra to equip it with a single electric motor powering the front wheels with around 150hp. It could also come with two battery pack options as was the case with the eXUV300 concept.

And while we haven’t got a proper look at its cabin, the eXUV300 concept had a similar design as the XUV300, albeit with a larger screen, and the same could follow on the production-spec XUV400. It could also feature Mahindra’s AdrenoX infotainment system and ADAS features.

The XUV400 will be one of the eight EVs that Mahindra plans to bring to the market by 2027. Based on an existing platform and being an ICE-conversion, it will be a direct rival to the Tata Nexon EV Prime that currently has the segment to itself. The electric XUV400 will thus be the entry point to Mahindra’s upcoming range of EVs where most other models have been conceived as ‘born electric’ vehicles and will also be global models, touting them as more premium offerings.

What are your first impressions of the electric XUV400's design? Let us know in the comments below.