Mahindra could introduce its EVs under a new moniker, similar to the Bolero, Scorpio, XUV and Thar sub-brands for its petrol, diesel vehicles. 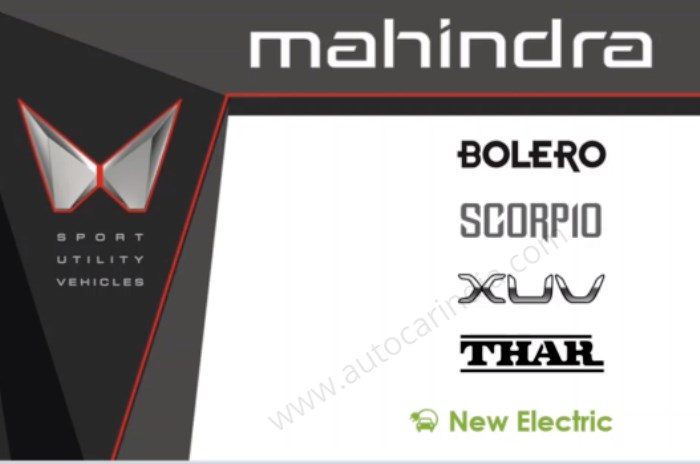 Looks like Mahindra and Mahindra is all set to double down on the electric vehicle sector in the coming years. At a recent press conference, Rajesh Jejurikar, executive director, Auto and Farm Equipment Sector, M&M, revealed the company’s EV ambitions. “The brands which we will focus on are the Bolero, Scorpio, XUV and Thar,” he said. “These will be the core brands, but it doesn’t mean that we will discontinue other brands. We may do a new brand for electric vehicles as we go along, but that's under discussion.”

Jejurikar revealed that Mahindra will launch eight electric vehicles by 2027. Four of these will be derived from the company’s range of petrol and diesel products. Then, beginning 2025, Mahindra will launch four new SUVs that will be underpinned by a “born-electric” platform and designed for electrification from the ground up.

Having planned for a strong EV portfolio, Jejurikar mentioned, “By 2027, we will be ready for at least 20 percent of our total UV volumes to be coming from electric vehicles.” Responding to a media query, he stated, “If the charging infrastructure grows faster, we'll likely be ready for an even higher penetration [of EVs].”

Despite competitors like Tata firmly having the grip over the electric passenger vehicle market right now, Mahindra is confident of its upcoming EV portfolio. “We would be number one in core electric SUVs with the eight new products,” said Jejurikar.

However, he added, “As we move into the next cycle [beyond FY2022-FY2024], we obviously expect that investments in EVs will be higher than investment in ICE [internal combustion engine].”

Responding to queries about Mahindra following Tata to create a separate subsidiary for its EV business and seeking external funding, Dr Anish Shah, MD and CEO, M&M, said, “We are open to getting more investments than the Rs 3,000 crore [already allocated] from private equity firms or others outside. We are open to all of those options because we see EVs being a major play for us going forward.”

He continued, “We are now open to funding coming in from outside that will help us grow much faster, but it's not just for capital, it's also for any expertise which we may get. In the current world, we sometimes also see expertise coming in from private equity firms or other strategic partners.”