Cumulative sales for the Kia Seltos have already hit 40,581 units in just 4 months since its launch. 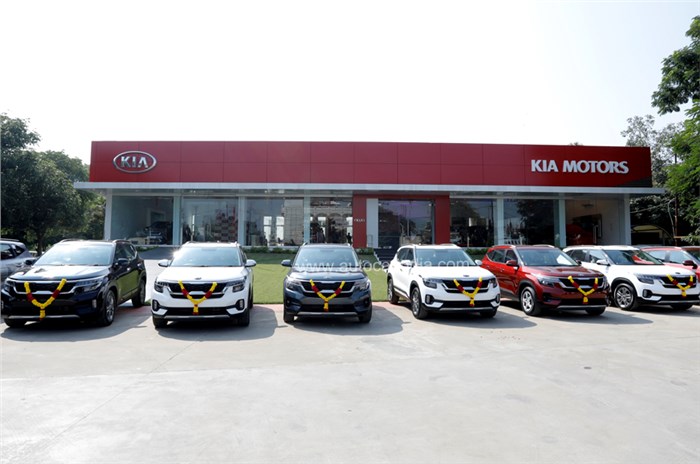 Kia Motors India’s strong performance in November 2019, when it sold 14,005 Seltos SUVs, has given a boost to Kia Motors’ global sales. With this, the made-in-India Seltos has notched cumulative sales of 40,581 units in barely four months, which gives it a monthly sales average of 10,145 units. Unsurprisingly, the Seltos already made it to India's bestselling SUVs list in October, taking the crown from the Maruti Suzuki Vitara Brezza.

This has been a very solid start for a new brand in the Indian market. The SUV's robust performance gave Kia Motors India a 4.85 percent UV market share till end-October.

Kia Motors India says it has received over 60,000 bookings for the Seltos until now and, to ensure timely deliveries, has started a second shift at its manufacturing facility in Anantapur to ramp-up overall production. The company says that it will not close bookings of the model as their plant is fully capable of meeting the rising consumer demand for the Seltos.

Helping the BS6-compliant Seltos make headway in the competitive Indian SUV market is its very aggressive pricing. The Korean carmaker's pricing strategy for all of 16 variants covers virtually every price point and starts from Rs 9,69,000 (for the entry-level petrol Smartstream G1.5 HTE model) going up to Rs 15.99 lakh (for the diesel 1.5 CRDi HTX plus (6AT) and Petrol Smartstream 1.4 T – GDI GTX (7DCT) and GTX plus top-end variant). With this, it takes on rivals like the Hyundai Creta, MG Hector, Nissan Kicks, Mahindra XUV500 and the Renault Captur in India.

Kia Motors Corporation today announced November sales of 2,48,942 units, led by popular models including the Seltos and the Sportage SUVs. The November results were marginally higher (0.80 percent) than the carmaker's 2,46,942 units sold in the same month a year ago.

Sales in Korea posted 48,615 units, almost on par with 48,700 sold in November 2018, led by the continued popularity of the Seltos SUV, which hit the market earlier this year.

Kia says the introduction of the all-new K5 in Korea later this month is expected to provide fresh stimulus to the company’s home market and that the momentum will likely expand to overseas markets through 2020.